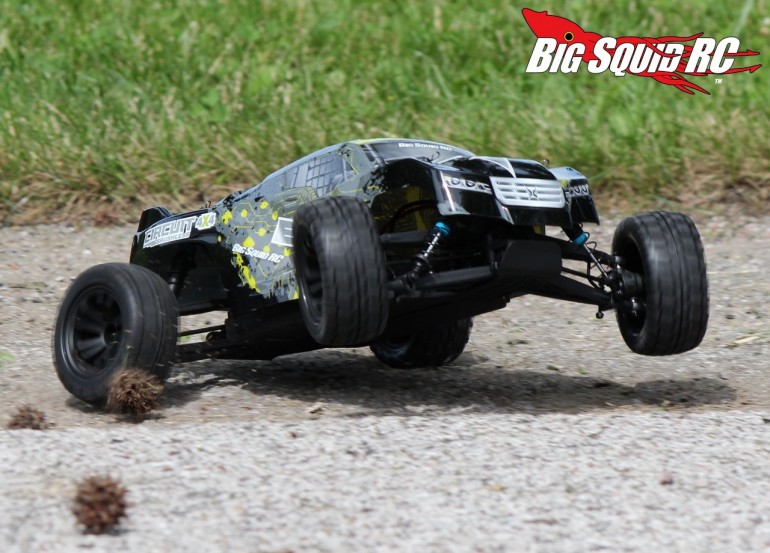 If there was ever a truck targeted right at bashers it would have to be the ECX Brushless 4WD Circuit with AVC from Horizon Hobby. There is no racing class for it, has never really been a racing class for it, and with big brushless power and stability control it has the makings of a backyard beast. Is it a grass spewing animal? Can it catch big air? Does it have enough power to get your heart pumping? Read on to find out…

Primary Competition: Ya, there aren’t a whole bunch of 4wd stadium trucks out on the market so you can compare the Circuit to other 4wd tenth scale bash oriented machines.

Build Quality: Out of the box we didn’t find anything out of order on the Circuit. The shocks were not leaking and felt properly filled, all the screws we tried were tight but not stripped, and even the gear mesh was spot on.

Test Venues: With one of the wettest summers on record in our area, our test spots have been quite depleted. We got in some pavement running at our local CostCo and did the majority of our dirt and grass testing at a couple of local parks in the STL metro area.

Set-up Notes: We mostly ran the Circuit bone stock. The stock EC3 connectors were used and we even ran the stock battery much of the time. We did skip the included charger in favor of a Hitec X1 Pro, and towards the end of testing we went LiPO with a 2S Kinexsis 4100.

Turning: The Circuit did ok at corner entry with the tires sticking well, but it did have push when on the gas, and its turning radius was a bit on the wide side. We found ourselves stabbing the brakes when entering tight corners to help it rotate better.

Jumping: In a nutshell, the Circuit tended to jump fairly level and its suspension was sprung/damped about right for good sized landings. When needing to make mid-air corrections the Circuit did so in a very controlled manner, its tires were fairly low mass, meaning it took a big stab of the brake to bring the nose down and even with BL power the nose rose slowly when pinning the gas.

Bumps/Whoops: The suspension was right in the ballpark as far as settings went, this resulted in a truck that handled well over rough ground. Occasionally it would get squirrely when doing high speed passes over rough terrain, but overall it was a hoot to drive through rough areas.

On-Road: The Circuit did a great job on-road. Its tires gave good traction, its powerplant had enough yank to be fun, and it didn’t traction roll.

Grass: The Circuit is a set of more aggressive tires away from being a great grass machine, but in stock form it could easily get stuck in moderately tall grass. If you do a lot of grass driving look to something with bigger tires (like the Ruckus) or expect to cut the check on some Pro-Line Badlands.

Tires: As mentioned above, the stock tires didn’t like grass, but we liked their scale tread and they worked well on pavement and harder packed dirt. Wear was never an issue with them and they helped keep the truck from traction rolling on pavement.

Power: Did the Circuit have impressive power? With the included NiMH there was some decent power on tap, about the perfect amount for a first time driver. However, the switch over to a LiPO battery was required to reveal its full potential. On LiPO the rip off the bottom was enough to really burn off the tires and do donuts, with better rip through the mid-range and seemingly a bit more mph up top. We didn’t notice any cogging, but the ESC did take a slow yet deliberate movement of the trigger to go into reverse.

Radio: Standard fare for a Horizon product here, the included radio was the often used Spektrum DX2E. We didn’t do a lot of speed runs, but range was good for our general bashing needs and the ergonomics worked for the majority of our testers. We weren’t fans of the plastic wheel, but the rubber grip was quite comfy.

Broken Parts: When we first unbox a RTR, we pretty much go over every nut and bolt we can get to. Arguably the most important nuts that we always check are on the wheels. Out of the box the wheel nuts on the Circuit were tight and we rechecked them after every couple of runs. Somehow, about a dozen runs into our testing, one of the rear wheel nuts came loose causing the truck to melt its wheel hex into the wheel. Fun time over, but not a huge thing to repair.

Several of our testers were big 1/10th stadium truck drivers back in the day. Those that were wished they had a 4WD ST platform like the Circuit back then, not only for racing, but also for bashing. A 4WD ST like the Circuit is a great and versatile platform- it is fast, it is low enough to carry lots of corner speed, and it jumps really well. Thankfully it exists today so we can enjoy it.

Hey look, the Circuit came with a decent set of body clips! They are big enough to not hurt the hands and strong enough not to pretzel all the time.

Our review Circuit didn’t like to turn a tight radius with the AVC turned off and it was made worse with the AVC turned on. We ran the AVC on the transmitter turned to roughly 25%, enough to make it easier to drive on the loose stuff, without sacrificing much tight turn steering. We didn’t notice the AVC affecting the steering on mid to wide sized corners, but we did notice it helping to keep the truck straight through rough patches.

When ECX says the Circuit is waterproof, they aren’t kidding. We did all sorts of water driving with no ill effects to its electronics.

Our noob tester Sam isn’t such a noob now days so we enlisted a couple of first time drivers at a local park. Both were really impressed with the way the Circuit drove, heck, one of them wanted to take it home with him. Also of note, the true noobs ran the truck on the included pack which seemed to yield enough power to thrill them, without being so much that they got completely out of control and started slamming curbs.

The stock servo gets the job done, but just barely. It is both on the weak and slow side.

Best Mod Under: The number one mod we can recommend to any owner is to pick up a LiPO pack. The stock pack works, but a good aftermarket LiPO will bring out the thrill of the brushless system.

Time To Bash: B With everything included in the box it doesn’t take long to get the Circuit from the box to the backyard.

Workability: B The Circuit is easy to work on due to its standard/open layout, but we really wish it would have come with hex hardware.

Car Show Rating: A Our testers were big fans of how the Circuit looked. It had sharp graphics and an aggressive truck body, while the the scale’ish tires and murdered out wheels were also well liked.

Bash-A-Bility: C A stripped out wheel hex brought the fun to a halt earlier than expected.

Fun Factor: B While not spectacular in any one category, the Circuit easily brought many a smile to our tester’s faces.

Handling: C The Circuit doesn’t have great handling, nor does it have bad. Its stock suspension does a good job of handling rough terrain, but in stock trim it doesn’t rail corners like it should.

Value: B A fun basher that comes with everything in the box, brushless power, and stability control for $329? That’s a pretty good value to us.

Parts Availability: C While more and more hobby shops are stocking ECX parts, you won’t find them on every shelf.

BigSquid Rating: B- We found the 4WD Brushless Circuit with AVC to be loads of fun at our local bashing spots. It has a nice amount of power, not too much for noobs, but enough to keep our seasoned testers happy, and it got over rough ground quite well.