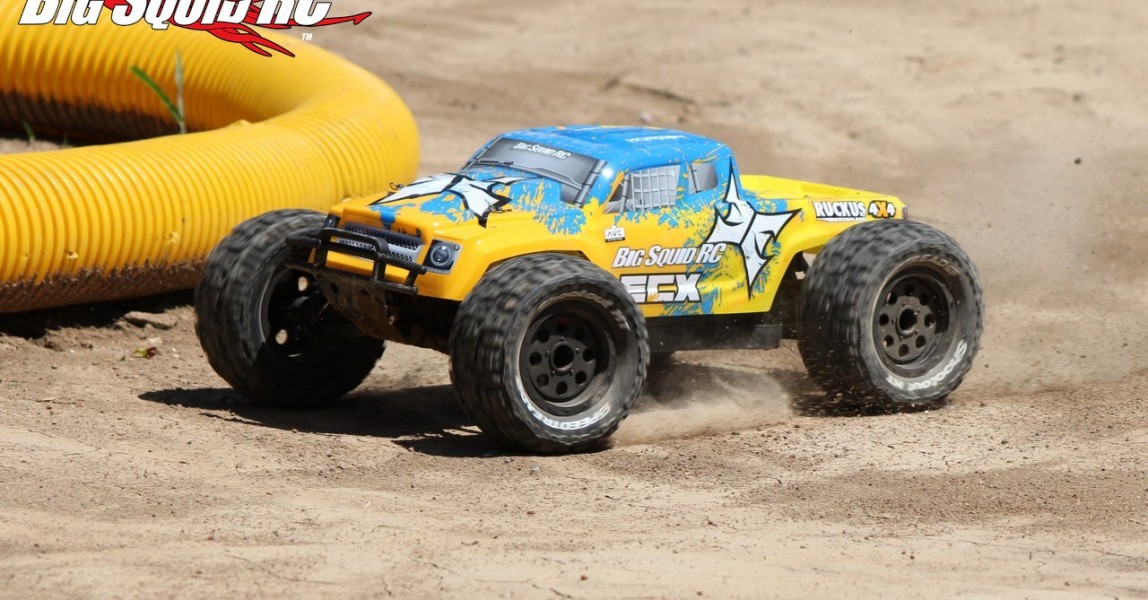 Want to talk about prime bashing machines? Then lets talk about brushless 4wd monster trucks, arguably the premier weapon of choice by backyard bashers across the globe. Today we’ll be talking a good close look at the entry from ECX into that class, the Ruckus Brushless 4wd with AVC from Horizon Hobby. Can it bash with the best of them? Does it have enough power on tap to satisfy? Read on to find out…

What’s Needed To Complete: Nothing all at, everything you need comes in the box.

Build Quality: After having the crew nitpick around the truck we couldn’t find anything wrong with the way it had been assembled.

Set-up Notes: We ran the Ruckus bone stock, even leaving on the EC3 connectors. We ran the included NiMH some, but also ran the truck on 2s Kinexsis LiPo packs. We skipped the included charger and used an iCharger 308.

Turning: The Ruckus turns predictably. Its servo is a bit on the slow and weak side which means it doesn’t do anything darty, but when asked to turn it certainly does so without washing out or oversteering. It can be made to turn tight by using a tap of the brake on corner entry, but it is at its best by railing outside lines.

Jumping: We only had one complaint with the way it jumped and that was its soft rear suspension which liked to bottom out hard on landings. Otherwise, the Ruckus was a joy to jump. It tended to jump fairly straight and level, while a quick tap on the brake or punch on the throttle would quickly level it out. It doesn’t have a center diff, so some drivers thought it was a bit touchy in the air, but it couldn’t be called overly sensitive like some of the other trucks in its class.

Bumps/Whoops: Damping and spring rates are right in the ball park on the Ruckus helping it handle quite well in bombed out rough sections. Its big tires and relatively high ground clearance also help in this regard. The Ruckus is truly great fun to pound through big rocky sections, over big dirt clods, or through the blow out sections on a track.

On-Road: While the Ruckus could be traction rolled by steering aggressively at speed, it was also easy to drive it fast without traction rolling by taking it a bit easier on the wheel. Overall, the Ruckus was great fun to drive on-road. It ignored the small bumps that you normally find in a parking lot and had more than enough power to put a smile on our faces.

Grass: Yes, the Ruckus is a beast in grass. Its big tires (and big power) can chew through some serious grass leaving a trail of clippings behind it.

Tires: While not outstanding on any one surface, the included Speedtreads were a decent all around bash tire. Also of note was the fact they showed little wear even when driven on pavement.

Power: The Ruckus comes geared fairly conservatively, this means that you can definitely feel some power, but it isn’t overwhelming. The power system delivers a real thrill to noobs yet is easy enough to handle that they aren’t scared to punch it. The power is relatively soft off the bottom for a brushless system, but comes in with a snappy punch in the lower mid-range and puts out good wattage up top. BTW, we didn’t notice any cogging and its take off from a dead stop was quite smooth for a sensorless system.

Radio: The Spektrum DX2E is standard fare for a Horizon RTR. Range is good enough for typical bashing, the AVC works well on slick surfaces, and the ergonomics work for a variety of hands. Now if they can just replace the hard wheel with one covered in foam we would be happy campers.

Broken Parts: Oh yes, our favorite part of any review, testing a truck’s durability. We did a normal amount of bouncing off of curbs (and pipes at the track) without busting any parts. The rear diff did start to make some noise after a few packs, so we know the gears will need replacing soon.

We found the included instructions to be quite lacking. They are good for getting the truck going out of the box, but don’t even include an exploded parts view.

The Ruckus tracked relatively well so we rarely cranked up the AVC stability control. However, there was a particularly slick section of dusty pavement where the AVC made a night and day difference. It helped us get out of corners more smoothly (and more quickly), and perhaps even better, it helped keep the truck straight when pounding on the brakes at corner entry.

Hey, the stock body clips don’t totally suck! Some people scoff at the importance of body clips, but they are one of those things that consumers are in continuous contract with. Good clips can simply make life better with a truck and the ones that came on the Ruckus weren’t bad.

A number of Horizon based trucks have a problem going into reverse and the Ruckus was another one of them. You can’t just slam the truck into reverse, nor can you make quick stabs to get it to go. You have to come to a complete stop then slowly move the trigger to reverse before it will obey the command. Once you are used to it it’s no big deal. Before that you want to pull your hair out because you’ve stabbed reverse a half dozen times and it didn’t want to to.

After getting in our first pack we found that the slipper on our truck was set extremely loose. It was easy for us to hear it buzzing and to feel the truck taking off slowly before the slipper would finally catch and the truck would then rocket away. A loose slipper is great for saving a weak drivetrain but can eventually melt itself down. We tightened ours up where it barely slipped from a dead stop and were much happier.

The stock servo saver was very weak. Once again weak is great for keeping the gears in a servo alive, but bad for general steering.

The battery tray is fairly large allowing a variety of packs to fit easily. However, the truck didn’t come with any foam spacers, this allowed the battery pack to slam around while driving.

Best Free Mods: If your Ruckus shows up with a slipper that is too loose giving it a slight tighten is the number one mod you’ll want to make. You don’t want to adjust it too tight as it still needs to slip, but our driving was greatly enhanced when we tightened ours slightly. Also, some Associated 40 weight oil in the rear shocks helped our truck land jumps better while not affecting its cornering too much.

Time To Bash: B The Brushless 4wd Ruckus is easy to get going from the box to the backyard.

Workability: C While it isn’t extremely difficult to work on the truck, we would rather see hex hardware and easier access to the spur/slipper.

Car Show Rating: B Our bash crew really liked the wheel/tire combo and the general shape of the body. Some of our guys weren’t real keen on the color choice on the body and it would have been nice for it to have been sporting some scale accents.

Bash-A-Bility: C Yes you can hit some pipes without breakage, but the rear diff will need repairing.

Fun Factor: B It’s nearly impossible not to have fun with a 4wd brushless monster truck and the Ruckus is no exception.

Handling: B The stock suspension settings are right in the ballpark and the Ruckus is a blast to catch airtime with.

Value: B At $329 the Ruckus packs a lot of key features like waterproofing, brushless power, 4wd and AVC.

Parts Availability: C The king of the parts availability hill is Traxxas where you can find parts at plenty of local hobby shops. While ECX parts are being picked up by more and more shops, in most areas it is still very likely that you will have to order in parts when it needs fixing.

BigSquid Rating: B- We had a blast reviewing the Brushless 4wd Ruckus and we think it is a good truck for bashing around the backyard with. It’s handling isn’t razor sharp like a racing truck would be, but for bashing it is super easy to drive while having plenty of good old brushless power on tap.