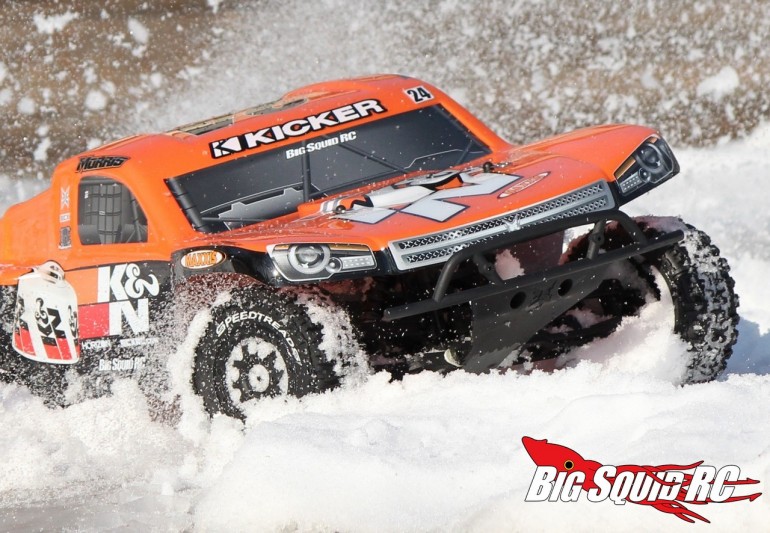 If you’ve been bashing for any amount of time then you are already familiar with the 2wd ECX Torment from Horizon Hobby. It has proven to be the bash machine of choice for many people and won our Short Course Truck Shootout not that long ago. The latest version of the Torment is much the same but comes with some very slick K&N Filters livery. How does the K&N Torment stack up to older versions? Is it still the best truck in its class? Is it a good choice for a noobie? Keep on read’n to find out…

Wheelie on demand: No
Backflip off ramps: No
Stability Control: No
Sound Module: No
Self-Righting: No
FPV: No
Top Speed (measured by BSRC on 2S LiPo): 25 mph
Runtime (measured by BSRC): 10 minutes
Street Price: $169

Primary Competition: The Torment has a lot of stiff competition including the Traxxas Slash, the ARRMA Fury, the HPI Blitz, and plenty more.

Build Quality: After a quick passing of the truck around the conference table, we found the Torment to be very well assembled. One front shock was a bit low on oil, otherwise it was solid.

Test Venues: The winter has been no joke in our area with flooding closing many of our favorite parks. We did manage to hit a couple of city parks on higher ground, a very muddy St Louis Dirtburners 8th scale track, and our favorite CostCo parking lot.

Set-up Notes: Stock, stock, and more stock. No, we didn’t change any settings on the truck so we could get a good feel for the way it comes out of the box. We ran the truck on the included NiMH about half the time, while the other half was driven on a 2S Kinexsis LiPo. Charging duties were handled by a Hitec X1 Pro as we decided to skip over the included wall charger.

Turning: There is a good reason why the Torment is so popular among the bashing crowd- its steering. It doesn’t really have oversteer or understeer, it typically turns quite neutrally. This makes it easy to drive for first day noobs, while making it easy to drive fast for those with more experience. Its stock steering servo is quite slow which keeps it from turning under a full tilt race machines in the corners, but overall it steers extremely well for a RTR truck.

Jumping: The Torment might fly just a tiny bit more nose high than some of the other trucks in its class, but it jumps good enough to arguably be the best in its class. The body shape on the Torment does tend to generate parachute effect on windier days, but its suspension does a great job of soaking up landings. Also, its overall geometry and suspension settings do a fair job of keeping the truck straight and flat when hitting rutted up jump faces.

Bumps/Whoops: The springs on the Torment are right in the ballpark, but it still feels a bit underdamped in its shock oil/piston combo. Nonetheless, the K&N Torment loves to plow over rough ground. It might hop a tiny bit more than some of its competition because of its light damping, but when you see a rutted stretch of track, or a gnarled up section of open dirt lot, the Torment is pretty much assured of making it through WFO.

On-Road: So no, the Torment was never designed for on-road use but it does a solid job when driven on pavement. The Torment rarely traction rolls and soaks up just about any sort of bump you are going to find without issue. The soft power system and slow steering make it super easy to drive on pavement, our noobie test driver absolutely loved bashing it in a big, open parking lot.

Grass: Like every other test truck of ours, we did a lot of grass driving with the Torment. Its overall size helps it get over grass up to a couple of inches tall and its tires did a fine job in grass too. If all you have to drive in is grass, keep a close eye on motor temps. Our test unit didn’t have an issue, but the ambient temp we did our testing in was always lower than 50 degrees.

Tires: The included Speedtreads Shootout tires didn’t really excel on any one surface, but did a decent job just about everywhere. The Shootouts were perhaps best on rough pavement and on grass, but got along fine on both hard packed and loose dirt. We also noticed that they wore very slowly, saving you the cash of having to buy new tires all the time.

Power: Hey, it comes with a RTR brushed powerplant, so don’t expect pizza cutter levels of yank out of the box. The entire power range is soft and easy to manage for a first time driver. A 25 mph top speed is standard for the class and is typically enough to keep most people interested. There are no big jolts of power coming out of the 15 turn Dynamite motor, just plenty of steady, easy to use, pull.

Radio: Like many other Horizon products, the K&N Torment came with a Spektrum DX2E. The DX2E has decent ergonomics, never glitched during our testing, and had enough range for the driving we were doing. Now if we can just talk them into wrapping that steering wheel in foam we would be very happy using one.

Broken Parts: It shouldn’t be news to you that the K&N Torment was a tank, the platform is well known to be one of the toughest in its class. We drove it like we stole it from day one and had a hard time breaking anything. After a full month of abuse we managed blow out a spur and to snap a front hub, but it took a whole lot of nastiness to do so. Yes, you can hand off the Torment to a first time driver and expect it to come back in one piece (we did several times).

So what’s new on the K&N Torment? Not much other than the livery. That certainly isn’t a bad thing, it was already arguably the best truck in its class.

We found that the stock ESC seemed a bit smoother than previous units. From a dead stop it seemed to pull away more smoothly and felt slightly smoother throughout its entire rpm range.

You can go from full reverse to full forward without the truck having to come to a stop. We always love trucks that are set up that like because it makes for some cool parking lot spin outs. No, it isn’t nice on the tranny or other driveline parts, but it sure is fun.

We did a lot of waterproof testing on the Torment. We really had no choice, it was either raining or snowing during our entire test period and the Torment held up like a champ.

Best Mod: The truck is outstanding out of the box, however, a LiPo battery instantly perks it up. Expect more yank from a dead stop and more top end when driven on a decent quality LiPo.

Time To Bash: B Nope, it doesn’t take long to take the K&N Torment out of the box and get it running. The transmitter is pre-bound to the receiver, the ESC is pre-calibrated, and it comes with AA batteries for the transmitter right in the box.

Workability: B The Torment is well laid out and easy to work on. The only place we would improve would be ditching the stock Phillips hardware for hex style.

Bash-A-Bility: A The Torment is the tank of the 2wd brushed SCT class, meaning it can take some serious abuse without breakage.

Fun Factor: A The K&N Torment lands an A here because we think it is the most fun truck in its class to drive. It handles incredibly well, it nearly takes a hammer to break it, and it has enough power to keep you interested.

Handling: B The Torment handles well in every category, from turning to jumping, but it doesn’t excel in any one category.

Value: A At $169 we feel that the K&N Torment is the best value in its class.

Parts Availability: B While we are seeing more hobby shops stock ECX parts, they still aren’t in every shop like Traxxas. However, the Torment platform has been out for quite some time so parts are extremely easy to find on-line.

BigSquid Rating: B+ The Torment is still the best truck in its class, the new K&N livery just makes it look that much cooler. Pick one up, it’ll put lots of smiles on your face at price that won’t destroy your wallet.