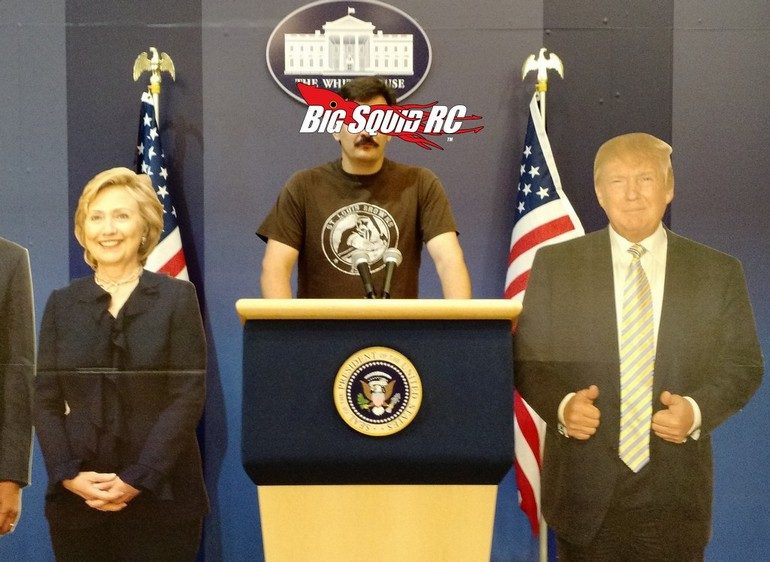 Whoa, big week coming up rc fans, thanks for joining me for yet another Cub Report. This week’s Cub Report is brought to you by Dunder Mifflin, one of the top one hundred paper suppliers in the entire state of Pennsylvania. You want paper products? Then you gotta have some Dunder Mifflin.

It is almost here. What might that be? That would be Monster Truck A-Palooza being held by Pro-Line and BigSquidRC. In case you didn’t get the memo, Monster Truck A-Palooza is This Saturday at Pro-Line world headquarters in Banning, California. That’s right, it is time to really get those wrenches spinning to get all your trucks ready to bash hard. Oh and, because we’ve never been to an official bash in SoCal, we can’t wait to see how those guys stack up compared to what we are used to seeing. We are expecting the best of the best in truck design, and some truly EPIC levels of SoCal airtime. So even if it is quite a drive for ya, we’d love to have you, yes YOU, come out and bash with us this Saturday. Use This Link to get all the finer details.

But it isn’t just a bash this Saturday, the Pro-Line crew will also be unveiling to the world for the very first time an UBER new product. P-L has already put out two teaser vids on this one, wouldn’t it be cool to be there in person? Industry folks are used to it, so if you’ve ever wondered what it felt like to be one of the first people on the planet to get a peak at a huge new release, you have your chance this weekend with us and the Pro-Line crew in California.

Oh and… our 1.9″ RTR Scaler Shootout is coming along nicely. Our HPI Venture FJ is now in hand, as is the Redcat Everest Gen7 Pro and Traxxas TRX-4. Those trucks will be going up against the Vaterra Ascender RTR, the Axial SCX10 II RTR,, as well as an entry from RC4WD that we can’t talk about quite yet. We were shooting for Black Friday as the date for the shootout to go live, but it looks like we’ll get things wrapped up well before then.

Also right around the corner is the Rocky Mountain Hobby Expo. The show is being held in Denver on October 28-29, so not too early into the winter snow season. Oh and btw, an industry friend asked me how I was going to deal with the cold. My reply was “The coldest I have EVER been in my life was iHObby in Chicago a few years ago, it simply can not be colder than that.”. And that is true. You industry peeps know what I’m talk’n about. I don’t remember exactly, but it was probably 10-15 years ago that iHobby had some seriously cold weather. It was like 5 degrees F (maybe it was neg 5??) and the wind was blowing up to 60 mph between buildings. I had just gotten off an airplane with nothing more than a long sleeve shirt. No, I am not known for my packing prowess. Any which way, we can’t wait to get in some time with our industry comrades. We expect that there are going to be some epic after-parties at this one, something that I think everyone in this industry could use about now. Oh and, before I forget, if you are part of company that isn’t going to Denver, get with Brian as we have a whole lot of booth space to fill if you want something shown.

Lastly… we’ve got some pretty cool stuff coming up this week too! Our full review of the Redcat Gen7 Pro goes live later this week, as does a review for one of the latest Tactic radios from Hobbico. Look for live coverage of the big Pro-Line unveiling on Saturday, then full coverage of Monster Truck A-Palooza early next week.

That’s all I got for ya this week, as always, support your local hobby shops and bash spots when ya can.