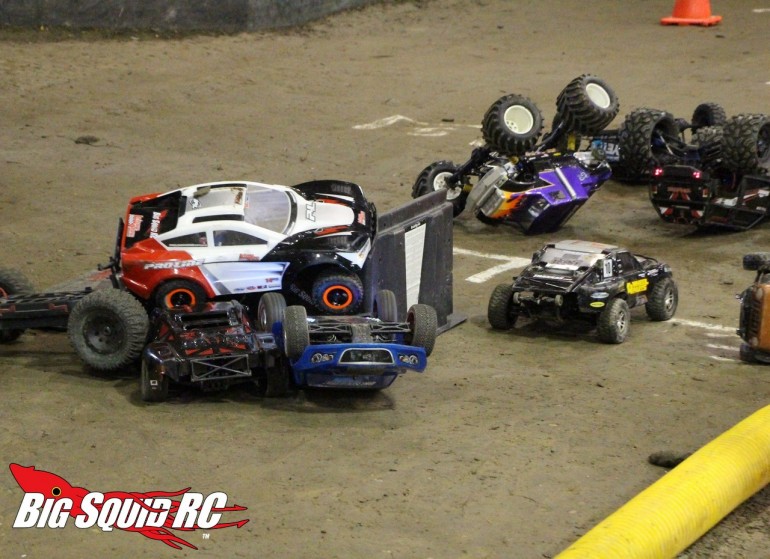 I’d like to thank everyone who came out to our 10th Anniversary Bash event this past weekend to show their support and have a fun day of bashing! We had a record turnout of entries and spectators! Every time I’d look up from announcing the play by play for one of the events, the amount of people standing and watching was staggering. We had almost 50 individual entries with over 130 vehicles! And here I was worried there would be leftovers from that giant cake! That thing was gone in minutes! We had people from 4 surrounding states that I know of, there may of been more! Thanks for making the long drive!

The obstacle course event ran a little longer than expected, but that was mostly due to us never having run that many entries before. We will be better prepared for next time, thanks for your patients. The great thing about our location was people waiting on the next event could run on one of the available tracks so there didn’t need to be any downtime. Sadly, our Sumo Table was left in the wrong place at the wrong time, and got broken beyond repair shortly before the event was supposed to start. Doh! The figure 8 and demo derby events were not only a blast to watch, but the amount of carnage was cringe worthy. Congrats to Xerxes who won BOTH demo derby events that started with over 20 vehicles! He is on everyone’s radar for the next one. The long jump event was a blast as always, with people going HUGE! The amount of landed back flips was an impressive number for sure.

One of the highlights of the bash was the money we raised for charity. All proceeds after the track rental fee’s are going to St. Jude Children’s Hospital. Between the entry fees, raffle tickets and auction we raised $1038! That’s One Thousand Thirty Eight Dollars! Thank you all!

I’d like to thank the Big Squid RC Crew for help making it all possible! Everyone had multiple jobs to make sure things went smooth, from setting up the events to entries and organization! Thank You to Kevin ‘Tomato Sauce’, Tim Mohr, Bill ‘Wrench’, Tiffany, 3DBill, and Adam the Intern!

We would like to thank our prize sponsors:
Hobbico and Futaba for the Futaba 4PX, T-Shirts, and other small items.
Pro-Line Racing for the awesome bodies, pit mats, t-shirts, glue and stickers.
Axial Racing for the incredible opportunity to give away the first Axial Yeti XL to a consumer! (Congrats Adam B!)
RPM for the Chrome Engines, camber gauges, parts trays, Banner and all sorts of other miscellaneous stuff.
Team KNK for the hardware kits and t-shirts.

I had so many people come up to me during and after the event to thank me for everything that we are doing for the RC community, and it really means a lot! It’s great to hear stories about how someone found our site, and our articles got them back into rc, or how our reviews influenced their last few vehicle purchases and they couldn’t be happier! We really love meeting and hanging out with all the fans, and hopefully we can do this more often in the coming years!

Special thanks to Leisure Hours Raceway and their crew for letting us host the event at their location. They were very helpful and accommodating with anything we needed. It was great to be able to take some of the events inside and get out of the cold Chicago weather.

Ok, enough chit-chat, this isn’t a Cub Report! 🙂 Press the Read More button for a ton more photos from the day.

Thanks again everyone for supporting us! Hope to see you all soon!