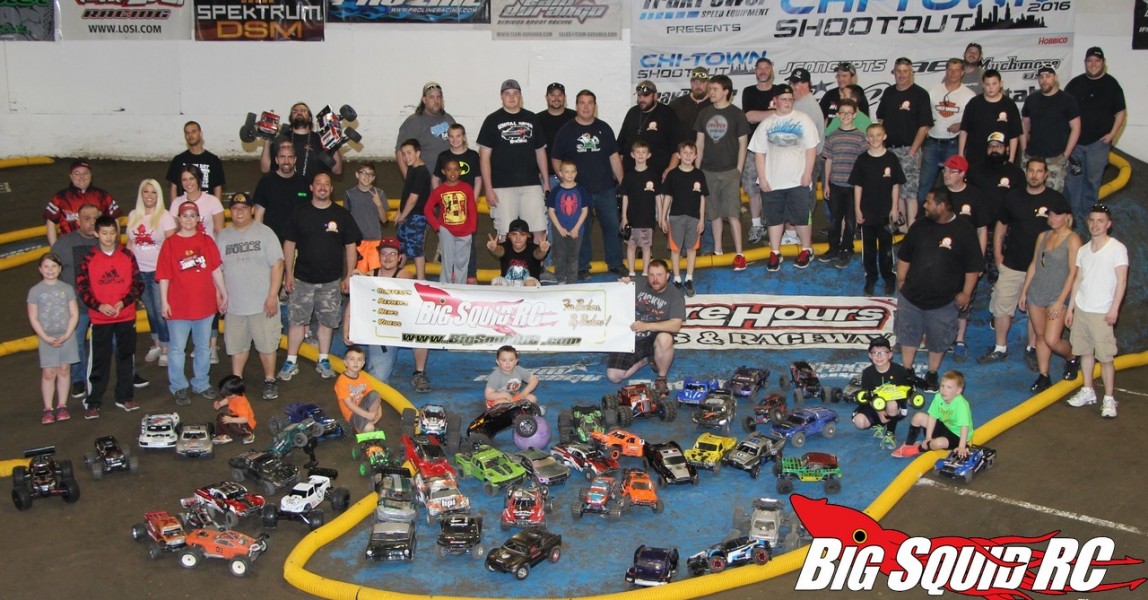 At last, our BigSquidRC 2016 Bash & Smash is in the books, and quite the bash it was! With drivers coming in from all over the Midwest, a perfect venue, and some of the best weather that the Chi-Town metro has seen in months, the Bash & Smash just couldn’t have been much better.

On Sunday April 17th, Bash & Smash 2016 was held at Leisure Hours Raceway in Joliet Illinois. Long known as one of the premier rc facilities in the country, the Leisure Hours facility was dialed for both our inside and outside events. Speaking of events, we held four this year- long jump, demo derby, sumo wrestling, and obstacle course.

Nearly every scale and genre of rc was represented at this year’s bash, from 1/18th scale up to 1/5th scale. We were totally blown away with the turnout, which was the best that we’ve had in years for one of our bashes, and we hope to keep seeing it rise at future events.

As always, it was great fun to bash with everyone, some people were new, some have made every bash since the beginning, and they all were fantastic to spend the day with. The BigSquidRC Bash Crew want to give HUGE THANKS to everyone for coming out, bashing is always more fun with more people.

Also on the huge thanks list were our event sponsors- Pro-Line Racing, Horizon Hobby, Hobby Authority Distribution, RPM Racing, and Hobbico. The folks at Pro-Line supplied a ton of really cool swag for our raffle, including a brand new PRO-2 Short Course Buggy kit, and the crew at Horizon gave away one of their epic ECX Ruckus monster trucks. RPM supplied us with a great box of giveaways that were snatched up quickly, and Hobby Authority Distribution gave us a bunch of $40 gift certificates. More thanks also need to go out to “Wrench” Bill for all his hard work with the ramp and sumo table, “3D” Bill for the pics/video, and to our beautiful Big Squid girls Aurora and Tiffany.

On the event side of things, there was some fun competition all day long. In the long jump, Paul Bludgen hucked his Losi 8IGHT 2.0 electric conversion 106′ off our 2′ ramp to win the long jump. In demo derby we ended up having our first ever tie, with Justin Underwood’s Traxxas Bandit taking the win along with Xerxes’ Associated Rival MT. Sumo wrestling is a game of not only skill, but also strategy, but in the end it was Nick Hendricks and his Traxxas X-Maxx that stole the show. Obstacle course is an event that has been at every BigSquidRC bash and this year a young man named Austin Wick won with his RC8B3e buggy.

In the end, it was a great day had by all and we ended up raising $1450 for St. Jude Children’s Research Hospital. Take a look at all the pictures below to get a feel for what the event was like, and if you didn’t make this one don’t worry, we are already planning to hold another bash this fall that will be bigger, badder, and the gnarliest yet!