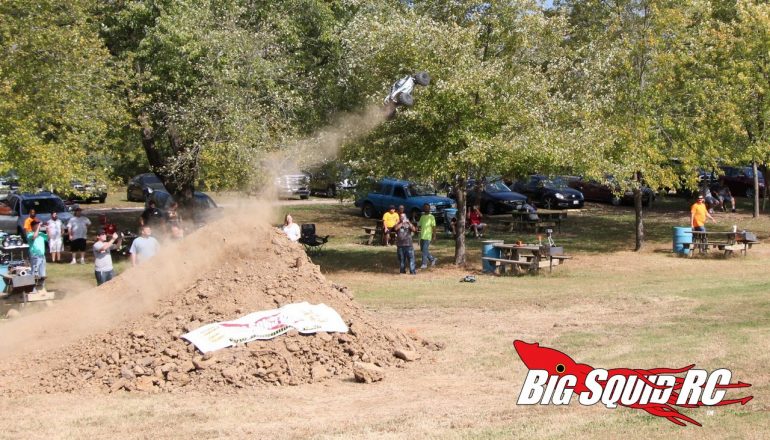 Last Sunday the BigSquidRC Bash Crew along with the St. Louis RC Freaks Club put on the 2016 BigSquidRC Dirt Jumping Championships presented by Castle Creations and Pro-Line Racing. We have held multiple jump contests in the past, but this time we wanted to change things up and hold one strictly on dirt in the same type of conditions that many people bash on every weekend.

Mother Nature must have thought that the jump contest was a great idea, therefore we were very lucky to have been given exceptionally good weather for an event in mid-October. The sky was mostly sunny and temps ranged in the upper 80s, even the wind was fairly calm, resulting in nearly perfect conditions for jumping. The crew at the RC Freaks also did a fantastic job with the massive take-off ramp and with the dirt run-up area, we couldn’t have asked for better.

The Dirt Jump Championships ended up having a total of 52 entries spread across three different classes. The 1/8th scale class had the most competitors, while the 1/5th scale class had the least. Competitors were given 3 hours to jump as many times as they liked and they could enter as many vehicles as they wanted to. We ended up learning a lot on Sunday, with the biggest lesson being that it is much harder to get a high top speed on dirt than it is on a paved surface. We also learned that all the huge power that we normally use on paved long jumps was overkill on dirt, instead, throttle control & proper tires were the keys to success.

The entire event went off without a hitch with everyone seemed to have a great time. Yes, there was some carnage on some of the landings, but the grass/dirt landing area proved much more forgiving than the pavement we have landed on in the past. In the end, World Record Holder Paul Bludgen ended up with the longest jump of the day at 122 feet with his Castle powered Losi 8IGHT 2.0 buggy. That is much shorter than his 262 feet on pavement, but it was still a big number, one that was hard fought to get on dirt.

We look forward to putting on another big dirt jump contest again next year, one that will hopefully be even larger in both attendance and in the size of the jumps. We also look forward to hopefully seeing other groups across the country/world put up some numbers on dirt to see exactly how our distances stack up.

We could never have put on such a big event without the help of many people. The BigSquidRC Bash Crew would like to give special thanks to-

* Albert Gwaltney for all the hard work building the take off jump
* Tim, Joey, Manny, and the rest of the RC Freaks Club for helping out
* Scott for letting us use the venue
* The trophy girls from the SOP Bar & Grill for helping at the trophy ceremony
* Castle Creations for sponsoring the event
* Pro-Line Racing for all their sweet give-away items
* Cubby for spotting all the landings
* Brian for everything he did to help make the event such a success
* Everyone who took the time to attend and compete in the event

You can read more Event Coverage right here on BigSquidRC.