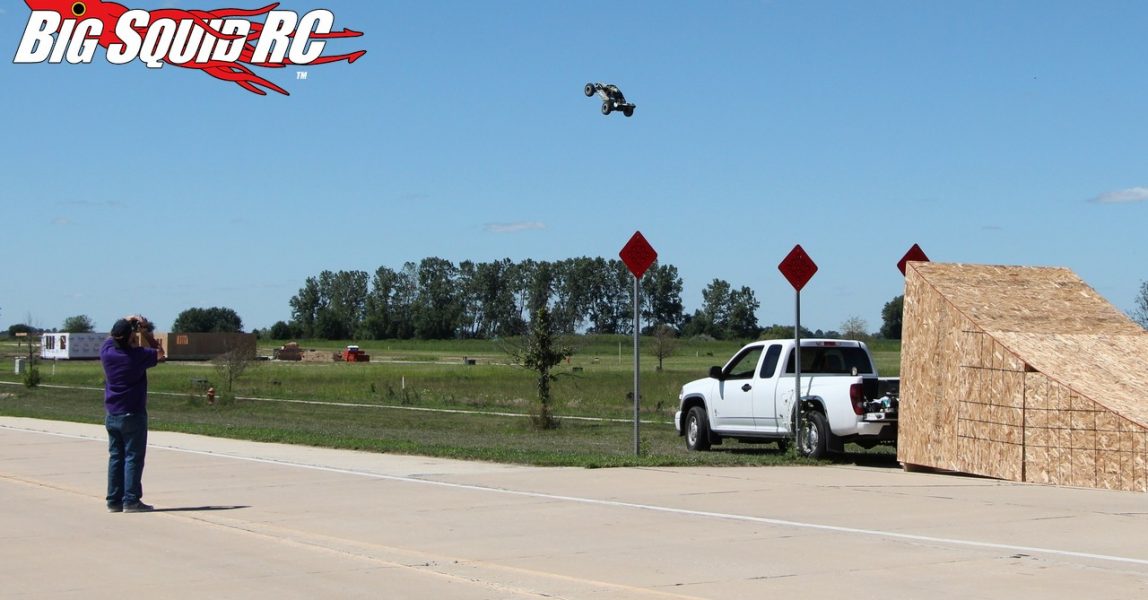 Last Saturday BigSquidRC hosted a Long Jump Invitational in Champaign Illinois. This has turned into an annual event where our Bash Crew get together and go for truly epic airtime. One of our staffers, Craig Nelson, builds the ramp, then we hit it as hard as we can to see just how far we can make an rc car fly.

The ’17 edition of the Long Jump Invitational was full of epic moments. We broke a whole lot of cars and even had a couple “interesting moments” caused by over stressed LiPo batteries. This year we held two classes, 1/10th scale and 1/8th scale, but also ran 5th scale as an exhibition.

The ramp this year was extremely adjustable. We ran the multi-piece ramp anywhere from 4 foot, to close to 10 feet, in height. The ramp also ranged from close to 30 feet long to as short as 20 feet. We also altered the launch angle from around 20 degrees to upwards of 40. This year was all about going bigger than ever, but perhaps more importantly, it was also about testing how much distance we could get out of different angles and take off heights. Needless to say, our Bash Crew learned a whole lot while we taco’ed out a bunch of cars.

In our competition we used a half dozen different cameras to capture video of all the jumps. We will be posting a video showcasing some of the larger jumps in the next couple of weeks. What you won’t see on the video is the true magnitude of the leaps. While they look big in pictures and on video, in person the 200 foot + jumps are absolutely breathe taking. On the bigger jumps, the cars were getting at least 30 feet high into the air. With such height, distance, and speed to consider, it was hard for the cars to land without breaking in half (or sometimes many more pieces than that).

The rules for the Long Jump Invitational were pretty simple. Go as big as you could, but for the jump to actually count, the vehicle needed to drive away afterwards. This was an off the cuff rule implemented years ago when HPI Europe did a long jump for a television program, but is one that we have also stuck with. After all, what the is the point of hucking a car 200+ feet if it is a mangled pile of junk afterwards?

The big question entering the competition this year was whether or not anyone could beat Paul Bludgen’s world record leap of 262 feet from last year. Paul himself built 6 cars to go after the record and spent countless hours of prep and practice time. However, even after all his work, and the work spent by all the other people that jumped at the event, Paul’s old record still stands as we were unable to leap past it.

In the 1/8th scale class Paul Bludgen was again the winner, this time with a longest jump of 250 feet. Paul had a dozen jumps well over 200 feet, but his longest jump of the day (that he could drive away from) was right at 250. His 250 foot jump was using a Losi 8IGHT buggy controlled by a Spektrum radio system. Paul also used a Castle Creations 2200kV brushless motor along with a Castle Creations Mamba Monster X ESC.

That didn’t mean that a record wasn’t broken that day. We did manage to set a new record in the 1/10th scale class. Tim Mohr came out swinging in 1/10th scale and put in a jump of 198.8 feet. Tim used a Losi TEN-SCBE buggy controlled by a Spektrum DX6R that was powered by a 6S MaxAmps battery and a Castle Creations Mamba Max Pro ESC on a 1415 3800kV motor.

In closing, we would like to thank all the crew that helped out last weekend. We need to give huge props to Brandon, Craig, Brian, Cubby, and Paul for working so hard to pull off yet another epic event. Next year we will be holding the invitational again, if you would like to be considered to compete simply Shoot Us An Email.

Use This Link to read more event coverage on BigSquidRC.