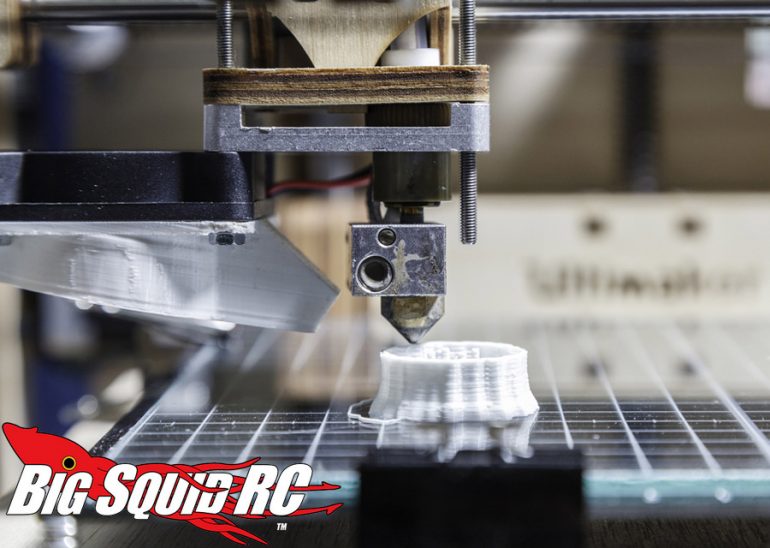 A few weeks ago Cubby touched on the coming 3D printing revolution in the Cub Report, and this week I wanted to elaborate a bit more on that.

While it’s starting to catch on in other segments of the hobby now, it’s really big in scaling circles already. There are several prominent individuals in the community that can pretty much pump out any type of scale accessory you need. Just take a look at the BIGFOOT truck replica I posted earlier this week, so much of the specialty stuff was done via printing….even the rubber tires!

For about two years now I’ve run various wheels, sections of bodies, scale engines, mirrors, body mounts, battery trays, radio boxes, fuel cells and light bars that were all 3D printed. Having a friend with one is invaluable if you are into this stuff.

While plastic isn’t an ideal material for certain critical components because of the strength, or lack thereof, compared to aluminum/steel, 3D printing allows for rapid prototyping to allow something to be machined quicker and be right the first time.

A good example of this was the RCBros Burly Mud Truck SCX10 conversion I did awhile back. The kit was originally done as a plastic 3D printed job. Once the suspension angles tested out ok, they were quickly machined and released to the public. For a small company or individual person trying to manufacturer parts, this is a fantastic way to bring things to market quicker.

As materials continue to improve, the sky is the limit. It’s not out of the realm of possibility to soon see complete 3D printed replica axle housings that could hold up to the abuse they’d see on the rocks, among other things.

Tires are also the next frontier. The first time I’ve ever gotten my hands on a set of 3D printed getups was on the aforementioned Ranger project. While the compound wasn’t exactly RC4WD X2SS, they were still pliable. If and when super soft stuff can eventually be done, look out!

Given the nature of what this segment of the hobby entails, I feel we are already living in the 3D printing revolution. It’s very common to see all sorts of scalers in the wild utilizing printed goodies, even if they are only cosmetic. As material technology continues to push forward, I share the Cub Reporter’s view that manufacturers better be aware of what’s going on and be prepared to deal with it, lest the traditional “aftermarket” go from big companies to the guy down the street with a-arm or axle housing schematics pumping out race quality parts on his printer and selling them to the masses via the Internet.

Technology is a crazy thing.