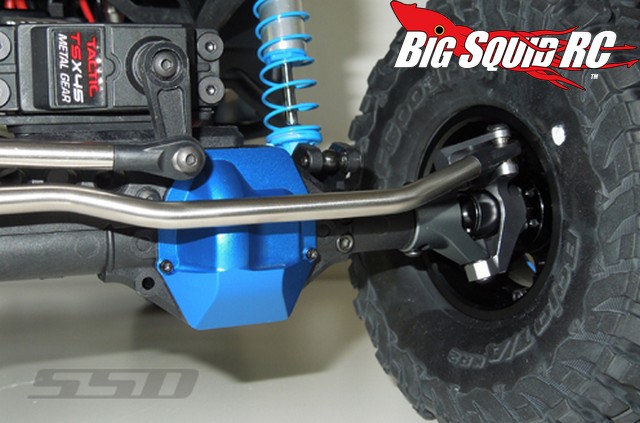 Hola scalin’ faithful. Welcome to 2017, a year of great promise. Sorry, perhaps it’s blinding optimism, but I don’t subscribe to thought that seems to permeate with many that “it’s only gonna get worse”. Don’t have time for that!

Hey, so this week I want to talk about 4 wheel steering (4WS). 4WS was mainly a monster truck thing until competition crawling got big in the early 2000’s. The steering setup, in conjuction with a dig unit, helped comp rigs to tackle insane terrain.

Most guys that I knew back then ran it independently of the front end via a stick remote. One directional stick controlled the front, the other operated the rear. As long as you had a strong enough rear servo, when not in use the rear functioned as a standard straight axle. This allowed it to only be used when needed.

When Axial trucks and their modular axles became popular  (i.e. the only difference between the front and rears are several easily installed/removed components), particularly the Wraith, 4WS made a bit of a resurgence in standard scaling vehicles. Many people still talk about setting their rigs up with it.

While it was a big boon to many comp vehicles, I’ve never really seen it work out well on a scaler. The main reason for this is that most people, from my personal experience, use a standard pistol grip radio and leave it on all the time.

This means that any type of cornering, even at low speed, turns into a snaky affair. It’s great to be maneuverable, but not so great to ALWAYS be wildly so.

Having constant 4WS can also be a problem when on the rocks because not only is it not necessary for many moves, it can also potentially blow a rear servo out in a hard bind situation.

The solution is to either hook your 4WS servo up to an auxililary channel which can be turned on/off with a toggle button or go old school and use a stick remote for independent operation like a comp vehicle.

In my opinion the stick remote option is the only one that really makes sense for rock crawling. Heck, it’s also the most practical for those that just want 4WS to show boat. Crab walking a truck (i.e. turning both axles the same way and driving sideways) looks trick!

It’s also a lot of fun to cut sweet donuts. My friend Kenny had his Wraith setup this way and spent as much time doing cyclones out on the trail as he did actual crawling.

Let’s here from you on this. Do you find 4 wheel steer on a scaler a gimmick? Can’t live without it? Drop me a line at doug@bigsquidrc.com or post in the comments.