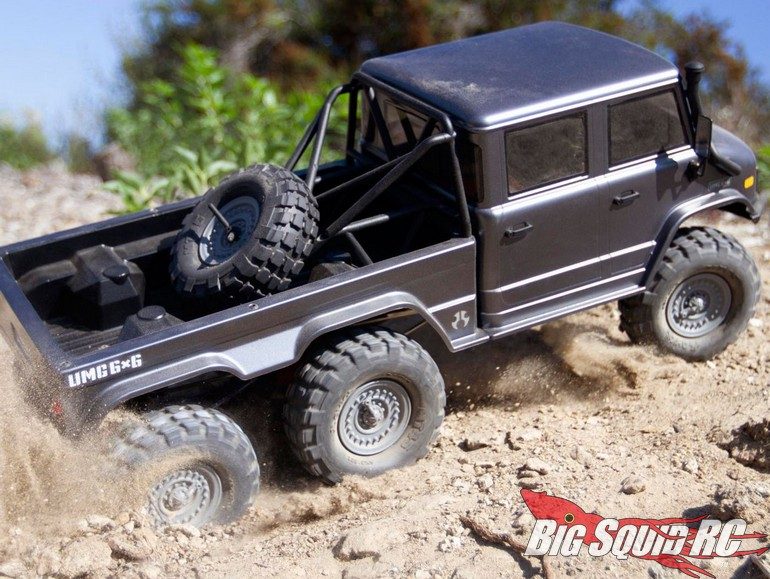 Axial Fest ‘19 is in full swing and for those of us who could not attend this years event you can always check out Axial Racing’s Facebook page for live videos. This year I was not able to attend due to the birth of my little girl who was born last Sunday. I won’t lie to you, I thought about taking the Big Squid RC private jet and would deal with the repercussions when I returned. Apparently, Cubby already had dibs and I realized my RC collection would not be safe from my wife if I was gone, lol.

All jokes aside there has already been some scalenesser goodnesser news to come out of this years Axial Fest and that is the UMG10 6×6! Now you can officially be excited, a few pictures got leaked at Pro-Line by the Fire about the UMG6 and it seemed no one wanted to say a thing in fear that it would not happen. If Axial keeps making moves like this, expect a mic drop moment like the UMG10 6×6 more often.

I have 0 experience with a 6×6 so I really don’t have a lot of initial responses. From what I see it looks like a regular SCX10.2 with a longer chassis and an extra axle. I did however see some features from the UMG10 4×4 on the UMG10 6×6 that I am absolutely in love with. Axial Racing’s new hinge pin body mounts were such a good idea that I would suggest Axial uses that mounting system for every rig they release from here on out. The new hinge pin system eliminates body post holes that would totally kill your “Real or RC” photographs.

The Video that Axial Racing released on the UMG10 6×6 has definitely lit the fire for me wanting to get my hands on one. I do think the playback speed is off on the video though. I watched it four times from four different devices and it was still too fast of a frame rate which kind of puts a damper on the video, because it looks like a great video and might not get the appropriate comments for such a well shot video.

I can’t wait to see all the footage of this years event all over social media. When you go to an event and post up a picture or a video anything about the event you’re actually giving the event coverage. Events need coverage to survive and grow. Obviously Axial Fest gets the coverage it deserves, and with so many talented RC videographers and photographers going to this years event expect to see some amazing footage. I hope to see a few rigs on the trails at this years event with the Big Squid sticker on them lol.

I want to thank everyone for all the well wishes for our new baby squid. It’s definitely going to be a crazy ride but that’s how I like it. Till next week, have a great weekend and keep Scalin