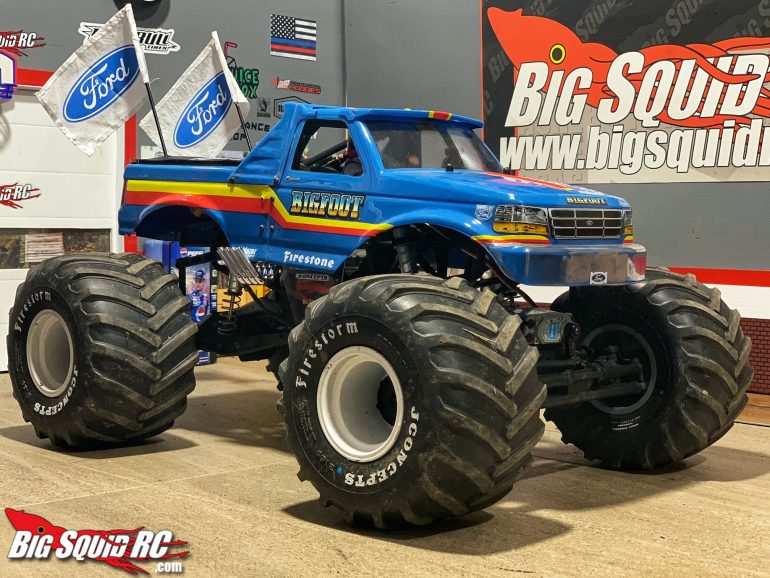 It is no secret that the entire Crew at Big Squid RC are Bigfoot fans. Bigfoot to me is more than a monster truck, Hell I even had a Bigfoot power wheel so when I see Bigfoot it brings back fond childhood memories. Coming from a broken home there was one point where my toys were my escape from my parents arguing all the time and my Bigfoot trucks were always there for me when I needed them. So Naturally when I got into the hobby Bigfoot Was one of the first builds, I thought of doing. Fast forward to 10 years later I finally pulled the trigger and built A Bigfoot! 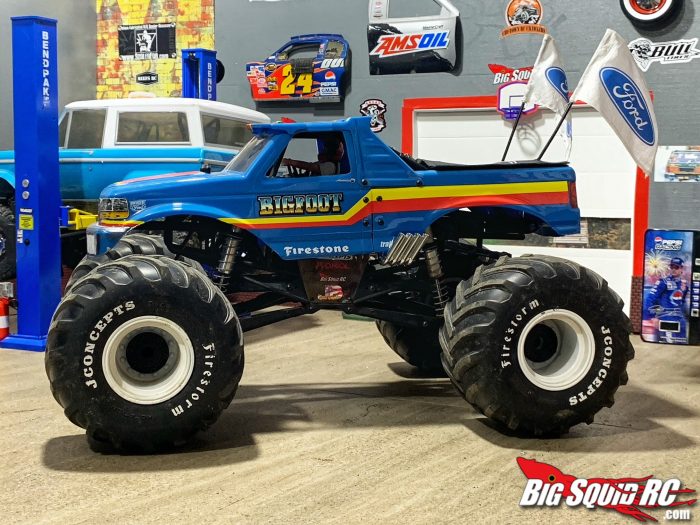 This Bigfoot #8 was not something that was slap together within a month. From the time I bought the Jconcepts body at the Ultimate Scale Truck Expo to its first debut at Axial Fest badlands, was about five months. I am not trying to say we were wrenching nonstop for five months but getting everything together that we needed for this rig took a while. The body, tires, and Wheels where no problem getting a hold of. It was the Bigfoot decals I was more worried about because they had to be perfect.  Luckily, I happen to know a good monster truck guy, his name is Doug, you know him from Monster Truck Madness. Told Doug I needed the Best Bigfoot decals that are out there he pointed me in the direction of JB scale Graphics, the only company that has the official license to do the decals. When the decal sheet arrived, I could see why Doug told me to use JB scale graphics, the decals are 100% accurate for the truck and looked amazing! I was also able to get the Ford flags and flag holders from JB scale graphics as well.

Knowing I could not get the color blue I wanted out of The RC paint options I sent the body to be painted by our in-house fabricator Greg Holman. Greg nailed the color I was looking for and I knew I made the right decision of sending it to him to be painted. This is the first build I have ever done where I did not do everything myself. Even my wife lent A hand in helping make the bed cover, so in a way I get to share this special truck with a few people and that is cool.

There are a ton of awesome looking RC monster trucks but a lot of them don’t have a scale interior. And there is most likely a reason for that because well they race them, last thing you want to happen in the middle of a race is have your scale driver get wedged in between your steering servo. Since our Bigfoot is not going to be 100% competition truck and this is Everybody’s Scalin’, I did a scale interior. Gathering the parts for the interior was like a scavenger hunt in my Shop, searching for all the little pieces I have acquired over the last couple years in preparation for doing a Bigfoot. I should have taken a picture of the way the shop looked after I was done, it was a train wreck. The interior consists of pieces of a toy grade Rammunition, vintage NASCAR figure helmet, 3-D printed seat, five point harness, fire extinguisher, RC4WD scale figure And a steering wheel out of a Axial parts tree bag. Little side note I did end up racing Bigfoot couple weeks ago and nothing fell off, so that is good.

Getting finished on time for AxialFest Badlands was super important, not only because it’s a cool piece to have in our booth,  but because of the Axial SMT10 chassis we used to celebrate the Brand. Winning First place in the monster truck concourse was complete surprise, but extremely wicked to see months of planning and teamwork be reworded with an award. 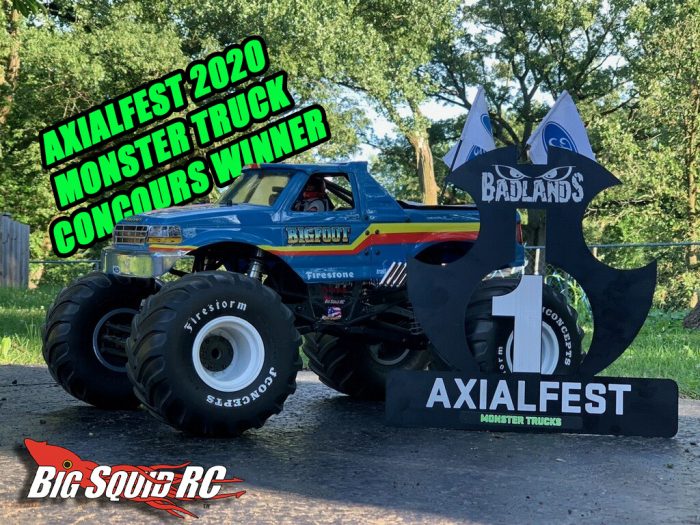 Before I end this week’s post I got to give a huge amount of thank you‘s to Greg Holman, JB scale graphics, Bigfoot 4×4, Jconcepts, My wife Chrissy Griffith, Doug Welker ,MaxAmps, Axial Racing, Hobbytown USA Saint Charles And last but not least Big Squid RC!

I hope everyone has a great weekend make it count and as always Keep Scalin!