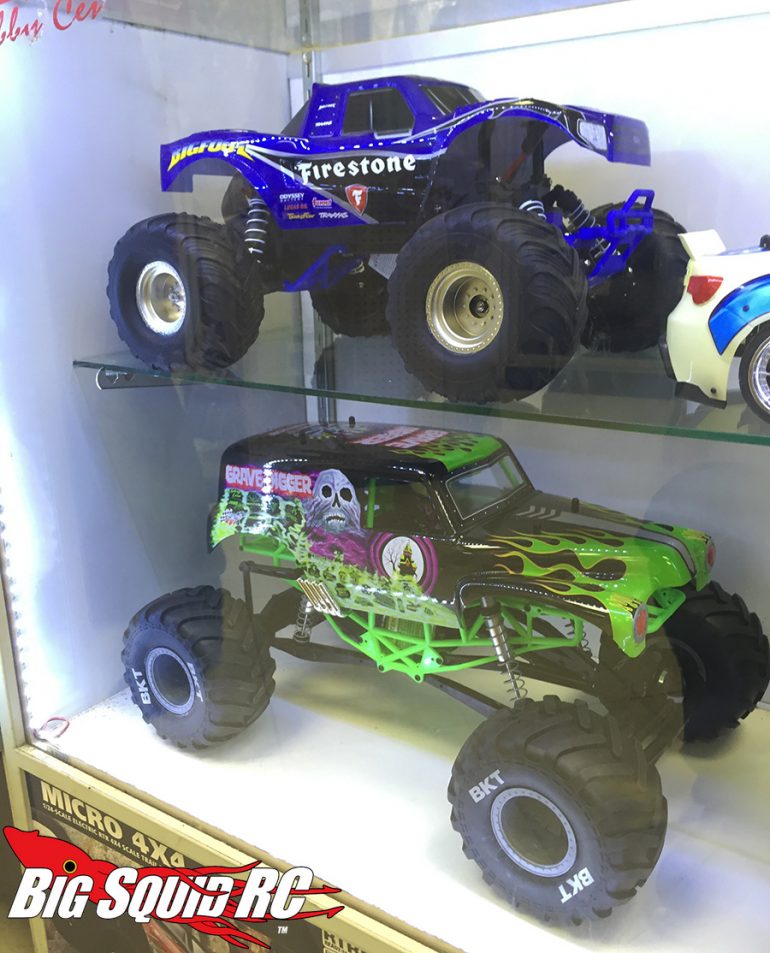 Everybody’s Scalin’ – Brings a Tear to My Eye

The above picture, shot last week at my LHS, may not mean much to some people, but it was definitely a cool sight for me. The two biggest names in monster trucks, each represented by two of the biggest names in r/c, sitting right there in the display case as two of the hottest items on the market. Brings a tear to my eye.

The most shocking thing to me is how great the Traxxas Bigfoot looks and, subsequently, how much I can’t wait to get my hands on one. At this point I think I’m the only guy on our staff that hasn’t wheeled our office truck!

I’m probably going to be tarred and feathered for this given that I’m supposed to be “the scale guy” and this is “the scale column”, but in a side by side comparison I think the Bigfoot looks a heck of a lot better than the Digger.

Now, I’m WELL aware the Digger is solid axle and the Traxxas is, well, just a Stampede. However, it’s a damn fine looking ‘pede!

Both trucks have spot on bodies, but the Bigfoot is dead nuts as for proportion. “Dem tars” are just too small on the Axial, which kills the look.

Don’t worry, I’m not turning in my solid axle card any time soon. The SMT10 is a great platform for modification and I really enjoy mine. Still though, it ruffles my feathers to see people online complaining that Traxxas is just trying to copy Axial by releasing their own licensed monster truck. That’s balderdash. The Bigfoot is priced at $199 and is aimed at a completely different segment of the hobby versus the $399 Grave Digger (and the just announced Max-D).

Just because something isn’t super scaled out doesn’t mean it should not exist or that it’s inherently bad. The Bigfoot should make for an excellent entry point to the hobby for many people.

Look, nothing would make me happier than seeing the big T use that Bigfoot license and throw down with Axial in a battle of scale monsters. Whether that will ever happen or not I don’t know, but in the meantime I’m just happy to see that full sized monsters have a mainstream presence in the hobby again.