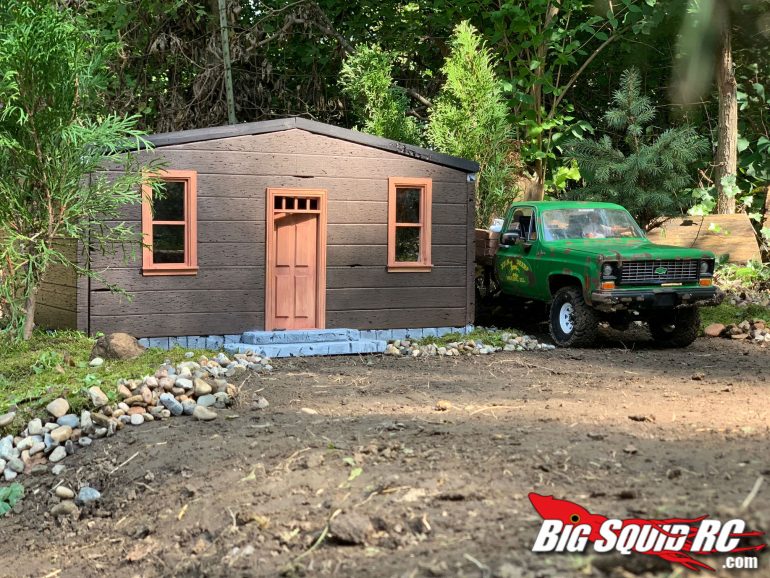 While I was out of commission for my last injury I had a lot of down time, literally because I couldn’t walk or stand for too long, lol. That time gave me the opportunity to build the Big Squid RC scale cabin for Juicebox Off-road Park. Unlike Chase’s Hardware store that is built out of thin wood the cabin is made out of my favorite material to use, foam board insulation. It’s cheap and easy to work with as long as you don’t mind little pink shavings everywhere.

The whole cabin build and most of Juicebox Off-road Park for that matter was inspired by Smiggin’s Folly, if you are into scale trail videos and pics you probably already know what I’m talking about. For those of you that don’t, Smiggins Folly is a beautiful scale course owned and maintained by Richard Lutz. The scale pictures and videos make the course look massive but in reality, it’s a small section of Richards back yard. Richard has figured out how to utilize a small space and yet still have the scale depth needed for amazing footage and most importantly, fun.

Ok, enough fan girlin’ over Smiggins Folly, back to the cabin. Carving brick walls out of foam board is a tedious task but doing wood may be even more so. Normal people judge the time it takes them to finish a project by actual time, I use a different method. The cabin took me 3 Marvel Avengers movies to complete. The plan was to just do the outside of the building but as I got going, I had to do the inside for added scale.

Even though the cabin is made from foam and can’t be left out for the weather to destroy I had to make a super scale plot. The trees were not the problem relocating, it’s was the moss “scale grass” that was not hard to move but delicate in transporting from one end of the yard to the cabin plot. Moss is just an all around amazing and beautiful plant and seems to survive just about any type of weather. It takes a while for it to start growing but worth the wait. What I do to get moss to start grown is I burn the area by dropping my mower deck to the lowest height and make a few passes over the area for a few weeks, over time keep repeating this and eventually you should get some moss to grow.

Now that the cabin plot is finished, the Off-road park has a tiny touch of Smiggins Folly. The cabin build only cost about 30 bucks to make including the doors and windows. If your looking to up your scale course with some cheap and easy buildings this is a great option. You can also make the buildings easier to break down and store by joining the walls with toothpicks, magnets, or even Velcro, only use glue if you want a permanent structure.

Well that’s it for this week’s Everybody’s Scalin’, have a great weekend and keep Scalin!