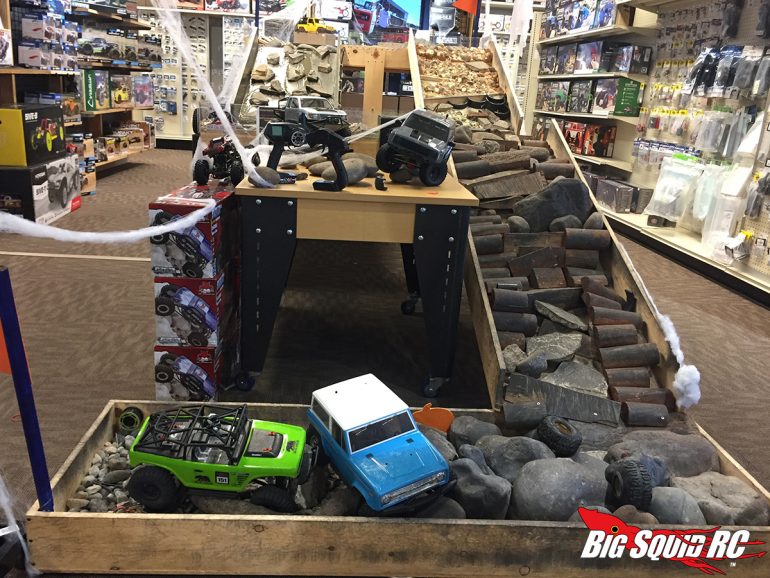 This past week has been a great one as my wife and I flew to California, rented a sports car and drove up and down the coast. As luck would have it, one of her relatives lives in Paradise, CA, a stone’s throw from Chico. So while she was visiting her uncle I managed to sneak into A-Main Hobbies retail store and peruse/take a few pictures for you guys.

It’s a heck of a hobby shop, and is a dream for the scaler faithful as it’s packed to the gills with about anything you’d want from all the major brands. They even have an indoor course with plenty of loaner rigs so you can get a feel for the different vehicles before making a purchase! I’ve scattered a few pics from my visit throughout here.

Having never been as far west as California, it’s really cool to see r/c as popular as I’ve ever seen it. There are beautiful off-road tracks EVERYWHERE, but man, the trailing. Oh yes, the trailing.

In the interest of fair reporting, I did not have a rig with me (look fellas, this was a family trip and for the sake of my wife’s sanity I didn’t bring one) so I couldn’t actively participate in the trailing as per usual. However, I got to ride some of them on a mountain bike and took a 1:1 trip through several gnarly sections of terrain that would make the local stuff to me in Missouri blush. I am so freakin’ jealous of you all that get to routinely get your r/c on in the Sierra Mountains!

I also managed to talk to several hobbyists while out in the brush as they were playing with their trucks when I rode by (again, don’t kill me for the lack of pics, while mountain biking I did not have a camera on me!). It was great to talk to them about what it’s like on the left coast. You west coast guys sure love your scalers.

Scaling may be scaling no matter where you are in the world, but having now traveled to most of the regions in the country over the last few years as well as having daily correspondence with folks from different areas, there is a lot of local flavor.

You west coast guys LOVE your scale rock bouncers / truggies and generally seem more likely to partake in really hardcore crawling. The midwest (raises hand) and southerners lean heavy on pick-up truck builds and like their deep woods trail runs. You’ll also find a lot of mud bogging and monster trucking going on. The eastern folk seem to mix it up and do a little bit of everything, which makes sense because of the variety of terrain you can find over there. There are also some really cool Top Truck Challenge events that happen in that region.

Basically, whatever’s en vogue with the 1/1 guys in a given area is filtered down to the 1/10 folk. Heck, in many cases it’s the same people! I love this about scaling. Much like visiting a new area and checking out the restaurants, some home cookin’ is great to sample on the r/c front as well.

I know one thing for sure, when I visit the Golden State next year, my RC4WD Trail Finder 2 is making the journey with me!