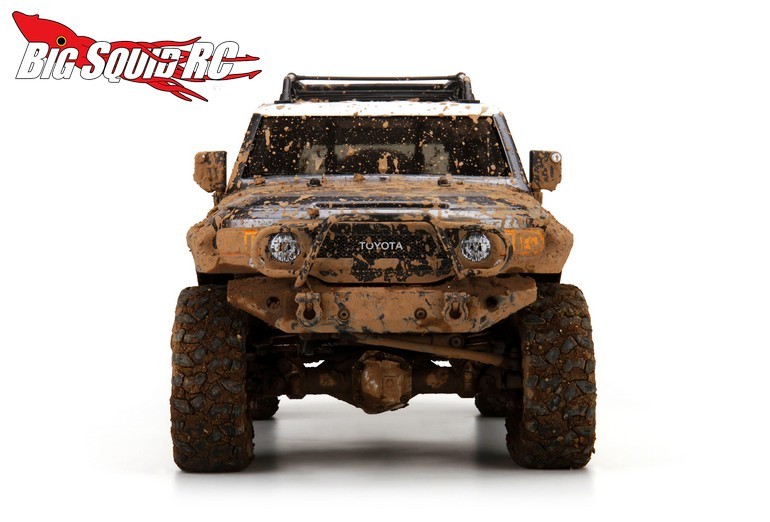 Finally there is news on the HPI Venture FJ! Despite being announced last month, under the hood had been shrouded in mystery. Thanks to our story on Monday, it’s a mystery no longer.

Apparently I was not the only one excited for the reveal as we broke single day traffic records here on BSRC. Yes, that’s right. The Venture now holds the championship belt in the “pre-release buzz” category, at least as far as our metrics are concerned.

Before discussing the truck, check out this video that HPI just released giving an overview of the vehicle –

In simplest terms, it looks like a cross between an RC4WD Trail Finder 2 (ultra scale) and an SCX10 (more performance oriented) with several unique features.

I really dig the forward mounted motor and tranny that feed into a mid-chassis’d transfer case. The BTA (behind the axle) pan hard steering setup sure looks great. The axles appear to be beefy and the aluminum covers and shock mounts are a nice touch. The rear body mount looks super stout. It appears to use hex hardware. And, most notably, the body looks outstanding.

The only potential negative that jumps to mind is that the battery tray is located in the rear. HPI is claiming (via a message board post on RC Crawler) that even with the power supply in the rear, the motor/tranny setup still allows the Venture to have forward weigh bias. Regardless, battery mounting position is something very easy to change on a scaler so it’s a minor gripe.

Going by the info that’s available, the Venture sure seems to be what many hardcore scaler types have been clamoring for. It’s coming at a time when it’s not exactly a big secret that HPI has been struggling. This truck could sure be a nice tonic to help cure what ails ’em. The hobby is a better place with HPI doing well, so here’s to hoping it works as well as it looks.

We are all eagerly awaiting one to show up in the office so we can do the review!