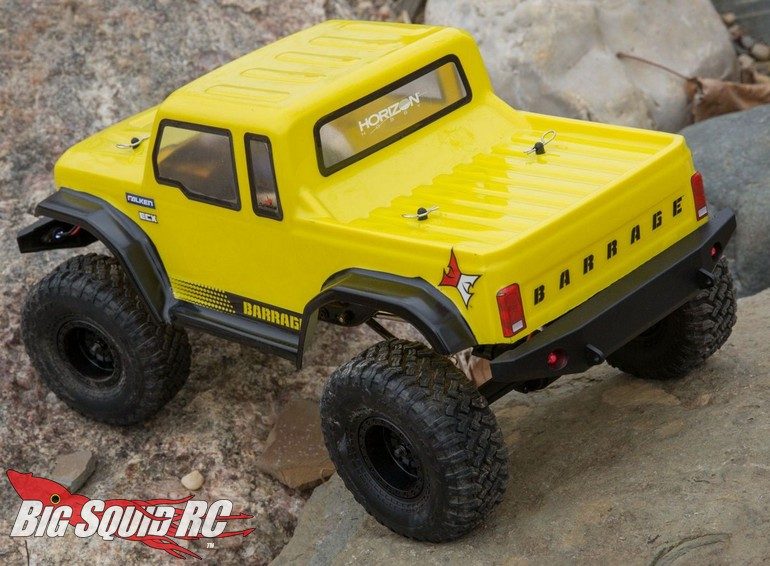 Greetings from a rain-soaked St. Louis, MO! Thanks to non-stop rain, I have done zero running over the last week. A good time for some bench racin’.

Last week ECX announced their new 1/12 Barrage Gen2 RTR, and I have some thoughts, especially having driven a lot of smaller scale stuff recently.

I headed up our review of the original Barrage, which was posted a little over a year ago. If I remember right, the majority of the testing actually took place in late 2016, so yeah, it’s been a minute.

It’s been a fun little low-maintenance rig that became my go-to “casual crawler”; I would throw it the trunk of my car for when I needed a quick fix. It was great for that. Small enough to not take up much room, but large enough to tackle terrain suited for standard 1.9’s.

While I did enjoy the truck, I would never call it a “looker”. The plain body and kinda funky proportions stuck-out in the land of modern day hyper-realistic looking vehicles. ECX has done a great job in tweaking the Gen2. The blue/yellow paint jobs look really sharp, and the smaller 1.55″ wheels give it much better proportions.

The tires have also changed, and assuming these use the same soft compound as the previous ones, they will almost definitely work better. Now, the previous All-Terrains were still really good for an RTR, it’s just that the closed tread pattern isn’t very conducive to crawling. The licensed Falken M/T’s that the Gen2 is equipped with have a much more aggressive lug. Also, they just look tougher!

The axles have also been redone on the newer version, as these are wider 1 piece designs that also look sleeker and have rounded pumpkins. The previous ones had flat edges which would constantly want to catch rock faces. Turning radius is also supposed to be improved because of different hexes.

And lastly, the Gen2 sports a slightly larger 390 size motor. I don’t expect this to be pumping out a great deal of power, but a bit more torque would’ve definitely helped out the original.

The OG Barrage was a good performing 1/12 truck at a fantastic price point. Perfect for the noob that wanted to try crawling without breaking the bank, or for the hobbyist that wanted a no-frills budget rig. Here’s to hoping the Gen2 improves upon that formula!

Thank you all for reading and I hope that you have a fantastic weekend. Stay dry!