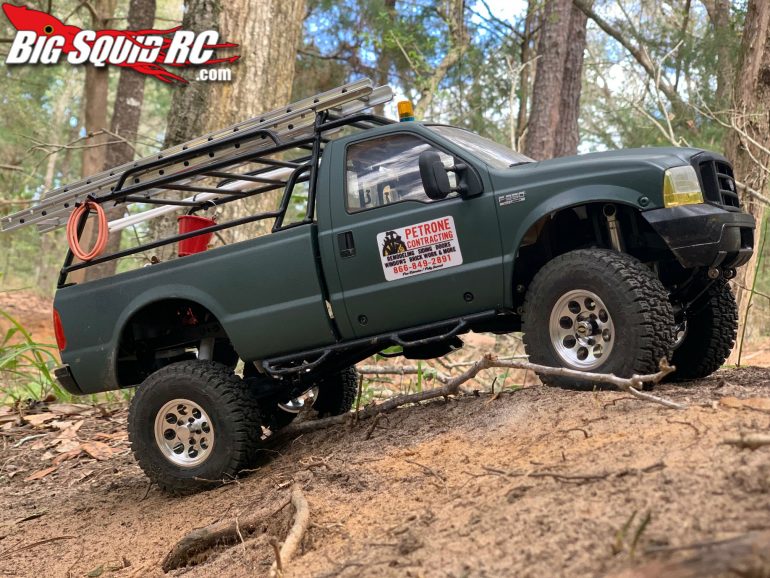 This next Fan Spotlight comes from a ScalerFab Team driver Ant Petrone. Ant is a very talented builder and has a love for Fords. It’s not every day I get to see the Fan Spotlights in person, so Ant and I took advantage of the opportunity and took his work truck out on the trials of USTE2020 for a private photo shoot. Ants work truck looks like a normal truck you would see on the way to work or even may drive something similar yourself. Ironically making a scale rig look like a real stock 1.1 is more challenging then tricking it out and giving it a lift.  Here is what Ant Petrone had to say about his work truck build. 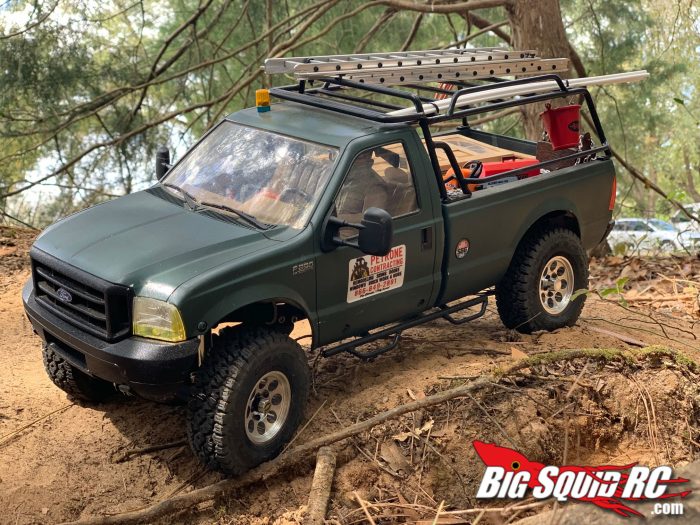 I have always wanted to build a super scale truck based on the Tamiya F350 body, and once I realized the Tamiya body can be bolted right onto a RC4WD Trail Finder chassis, I knew that’s what I wanted to build.  Initially I wasn’t happy with build.  I wanted to build a work truck that was scale enough to look like something you would see driving down the street but due the narrowness of the Tamiya body I was stuck with wheels and tires that didn’t fit inside the body.  A few years passed and then Boom Racing made their BRX70 Phat axles and claimed they were the narrowest axles on the market. I instantly bought a set and they bolted right up to the trail finder.  I mounted the axles above the leaf springs to bring the stance down and give it a more realistic ride height.  I bought a set of 1.55 RC4WD Falken Wildpeak tires and mounted them to a set of Boom Racing 1.55 wheels and got exactly the look I was after.  My good friend Troy from Scalerfab built me custom sliders for the truck that include steps like you would see on a real work truck. The interior is a modified Tamiya Bruiser interior that plays host to a medley of scale items on the inside.  The cage for the bed is an ebay special and was a must have to give me the work truck look that I was after. The bed is packed full of scale items from tools, oil bottles, chains, to even a full-sized scale door waiting to be installed at the job site.  The top of cage has a RC4WD scale ladder and scale pvc pipes.  Traversing obstacles is made easier thanks to an entire Teraflex kit in the rear with shackles and z-boxes.  A fell LED kit from Powershift RC provides plenty of light for the headlights and taillights. Even the yellow construction light on top is fully functional as well. Future plans include building a scale exhaust system and possibly making a functioning horn that can be triggered from a spare channel on my remote.

Ant, thank you for sharing your amazing build with Big Squid RC; I know I am looking forward to your next one. Remember, if you have a cool rig or even a scale shop you would want to see on a Fan Spotlight email me at Jeremy@bigsquidrc.com. Have a great weekend and wash your hands! I’m now going back to the off-road park for more SCX10III testing, till next time Keep Scalin!