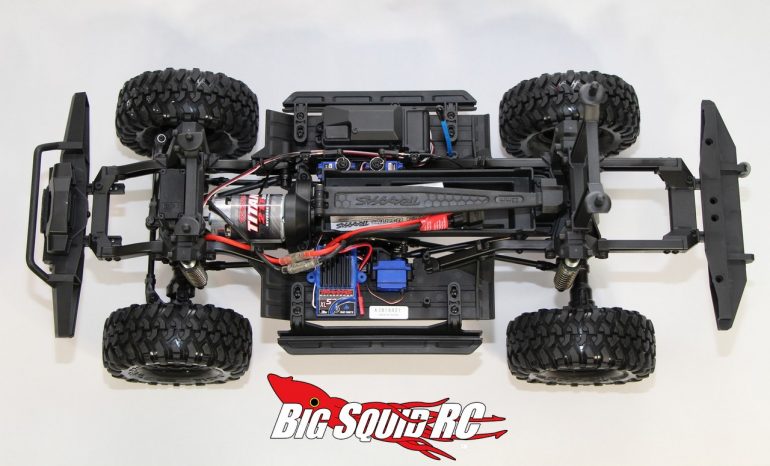 Happy TRX-4 release week everyone! Most hobby shops have gotten their initial allotment in, and crawling groups, message boards and YouTube channels are lighting up with first run experiences. I’ve been taking in a good number of these impressions and it’s good to hear that the general public by and large seems to have come to the same conclusion that we have.

Ok, so you’ve got one. What do you do next? Hop it up, of course! The TRX is a great truck out of the box, but there is room for improvement. Mine is currently on the bench and about to receive the first round of upgrades. Here’s what I’m doing-

This is the one area that I consider an upgrade being a mandatory need. Hey, that’s a pretty good compliment considering some other vehicles have a laundry list of what I see as “must-do’s”. The TRX-4 servo does a good job at being waterproof as advertised and will serve you fine if you are primarily doing light trailing, but if hardcore rock crawling is on the agenda you’ll need something with more oomph.

I’m a creature of habit and all of my trucks eventually get Hitec servos. This one will be no different. I’ll probably go with a Hitec HS-5646WP as that provides plenty of torque for a 1.9 rig. It’s also waterproof, as fording rivers and creeks is something I love to do. These servos have always served me well and I’ve used them in Trail Finder 2’s, SCX10’s and Ascenders that I’ve owned. They normally don’t require a BEC in smaller tired applications, so that’s another plus for me.

Give it new Shoes and a Body

I have no idea what I’m going to do for either of these, I just know that I will do something! When I first laid eyes on the D90 body I told myself I’d do a Camel Trophy livery on one and call it a day. I still may do this once clear shells are available. In the meantime though, I’ll probably go with one of Pro-Line’s new offerings as I’ve been meaning to paint one up, just not sure which.

The body choice will influence what wheels and tires I run with, but I plan on sticking to something around the stock size. This isn’t to say that the included ones are bad as they are killer for a RTR offering…but I gotta have the right set of kicks to complete a build.

Oh, and I gotta have closed cell foams.

One of my personal traditions since accumulating a large collection of scaling vehicles is to put my big power mill into what I consider my “lead vehicle”. The TRX-4 has assumed this status (first non-Axial vehicle to ever accomplish this for me) and, as my new Air Force One, will be getting a Holmes Hobbies 3500kv sensored Puller Pro. We will see how the stock parts hold up with that bad boy installed!

Apologies if this post is kinda vague and rambly in parts, as, like many of you no doubt, I’m still trying to figure out exactly what I want to do with this thing….and am enjoying it while I figure it out. It’s fairly refreshing to be able to just yank something out of the box and use it as is without being forced to change things immediately for lack of performance otherwise.

If you just picked up a TRX-4 or have one on order, what do you plan on doing to yours? Feel free to drop me a line at doug at bigsquidrc dot com and, even better, include pics!