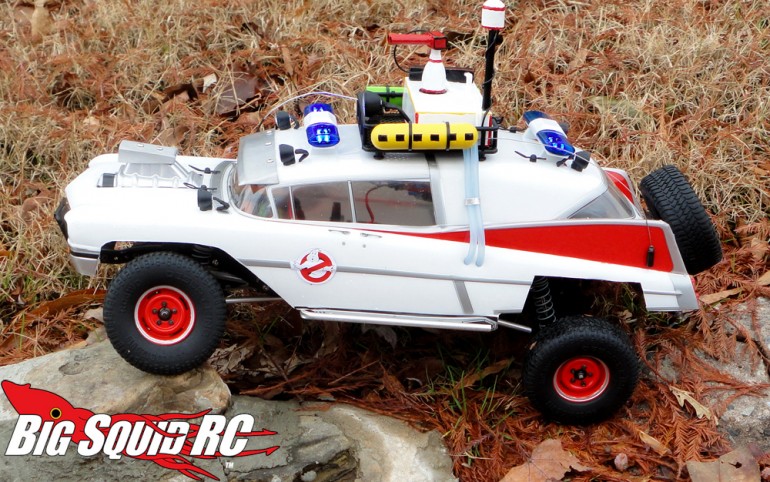 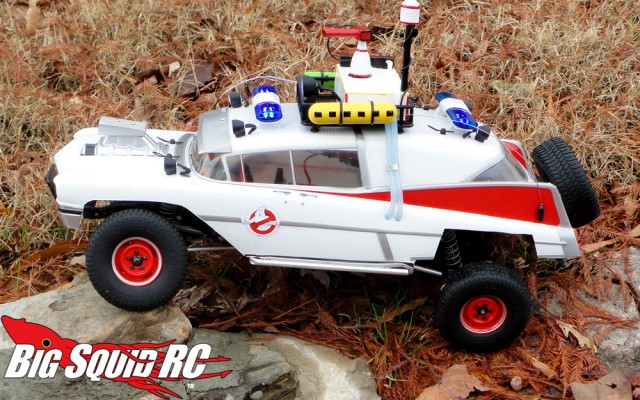 It’s been a big week for Ghostbusters fans as LEGO just announced an Ecto-1 “30th Anniversary” kit that will be released in June (photo below). As a lifelong fan of the series (and car) you bet your unlicensed proton accelerator that I’ll be picking one of those sets up. As far as my favorite “movie cars” go, Ecto-1 shares a spot in my heart with only the 1989 Batmobile for coolest of all time. Sorry folks, the Bullitt Mustang is cool and all, but it never was used to save New York from the forces of Gozer the Destructor. It also never did kid birthday parties for a cheap buck. Anyways, so with Ray Parker’s classic theme now hopefully pumping through your brain, check out a sweet pair of anti-supernatural scalers that a couple readers decided to share.

First up is Micheal Matthews’s tribute to the famed Ecto-1 Cadillac Ambulance. His off-road version of Ecto-1 is based on an HPI Graverobber body sitting on top of a highly modified Axial SCX10 chassis. He made custom links to stretch the wheelbase to fit and used RC4WD 1.55 Steel Wheels (painted red) and Desert King tires. Many of the scale pieces of ghostbusting equipment you see on top were custom made and all the lights are fully functional. He wanted to give a shout-out to Josh Harris for doing all the wiring. Great looking rig Micheal. That would be a heck of a truck to have on a night run!

In keeping with our supernatural motif, the next truck up is Nicholas Klein’s Scooby Doo “Mystery Machine” inspired Axial SCX10 JK. Nicholas said he decided to do this theme because the actual Mystery Machine always seemed to do well off-road. You know, now that you think about it he’s right. That old van was constantly in the woods, on old dirt roads, and other tough spots while in hot pursuit of Old Man Caruthers. Guess ol’ Shaggy and Fred must’ve locked the diffs, eh? Thanks for sharing Nicholas.

Do you want to show off your scale truck like one of the above fine gentleman? Do you like free stickers? Great! Shoot an e-mail to doug at bigsquidrc.com and include a brief description along with some good lookin’ pics.