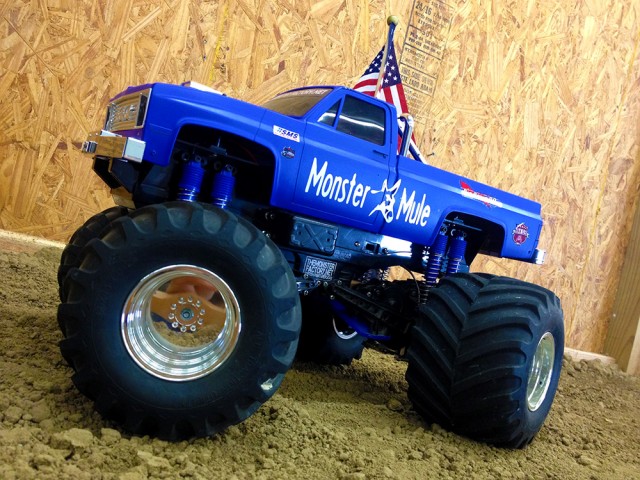 As the calendar turns to 2014, it’s truly an awesome time to be into the scale scene. It seems every week someone releases a cool new kit or accessory based on something in the 1:1 world. Rock racers, short course trucks, Jeeps, Formula 1, rally cars, desert buggies; whatever your 1:1 pleasure the r/c industry most likely has your drug of choice. This leads me to one question: Where is my killer out-of-the-box scale monster truck?!

Ever since the scale scene exploded I’ve been patiently waiting for a company to release a true 4 linked, solid axle monster truck that performs well and that anyone can pick up for a reasonable/semi-reasonable price. No, the recently released Tamiya TXT-2 doesn’t count because it’s basically a slightly modded TXT-1, which was woefully outdated when it was originally released around the year 2000. The way most scale monster truckers get their fix is still modifying a stock Clodbuster…a truck released in 1987! Now before you think I’m hating on Tamiya, the Clodbuster is undoubtedly my favorite r/c of all time. It was the truck that as a little kid had me salivating to get into the hobby, was the first truck I ever built, first truck I ever modified (I had an old school Clodzilla tube chassis), and I still have a relatively stock Super Clodbuster that’s a blast to run (pictured above). The truck holds a very special place in my heart. That being said, it’s crazy that the truck is still the gold standard for scalers to base builds off of over 25 years later. I mean really, that’s sort of insane.

I’d like to think that before the scale boom slows down we will see one of the “big boys” take their stab at one. Hopefully it’s ready to rock out of the box and doesn’t need hundreds of dollars worth of modifications to be able to handle a simple bashing session. Shaft drive solid axle r/c trucks used to be very rare but they are now extremely common. Guys are starting to use Axial/RC4WD axles and transmissions mated to aftermarket monster truck chassis (like a CPE Barbarian, pictured below) so it’s becoming more feasible all the time. I also know from my time working at Bigfoot (the monster truck, not sasquatch) that certain popular r/c companies have been toying with the idea of releasing something, but so far nothing concrete has surfaced.

Will 2014 finally be the year we see a mainstream monster truck scaler? A guy can sure wish! In the meantime, I guess I’ll keep playing with my Clod.