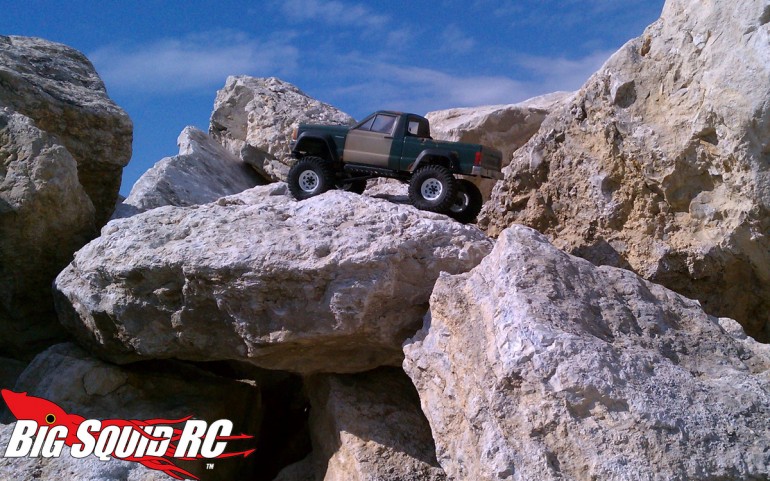 If you’re sick of standard looking Jeep Wrangler r/c bodies then there is good news on the horizon. Jeep truck bodies are about to invade your LHS!

Before getting to the totally new stuff, a longtime favorite is making a comeback – the Pro-Line Jeep Comanche. The Comanche has been out of print for awhile and it’s cool to see PL firing up the mold for another go-round. My first SCX10 (pictured above) sported a killer looking rusty shell painted by Terry Plum of the Monster Factory. I’ll always wax nostalgic about it (it’s retired on my shelf).

The next two things are upcoming releases which are perhaps the worst kept secrets in the scaling world. Axial is preparing not one, but two new Jeep truck bodies for release.

The first one is a replica Mighty FC. Jeep unveiled this retro styled, forward control (ahem, FC) concept a few years ago and it’s had off-roaders salivating ever since. Pictures of this body have surfaced online and Axial actually posted a video of it on their Facebook page saying an announcement is imminent.

The FC is a sweet looking ride but it’s the second “leak” that has me all hot and bothered –  the Jeep NuKizer 715. Unlike the FC which has been officially shown off, the only reason anyone knows of the NuKizer is a blank Tower Hobbies posting. The NuKizer is a concept vehicle inspired by the classic Kaiser M-715 that did it’s work back in Vietnam in the late 60’s.

Both of these vehicles look seriously badass in 1:1 form so I’d expect they will be hits in the r/c world. The prospect of rocking a military themed NuKizer body makes me very excited.

These types of releases are exactly what I was hoping for when the Axial/Jeep partnership was officially announced a few years ago. The Wrangler will always be the 800 lbs gorilla in the room but it’s great to see some of the other less popular – some would say oddball – designs being used as well. Be prepared, the invasion is coming to a trail near you!