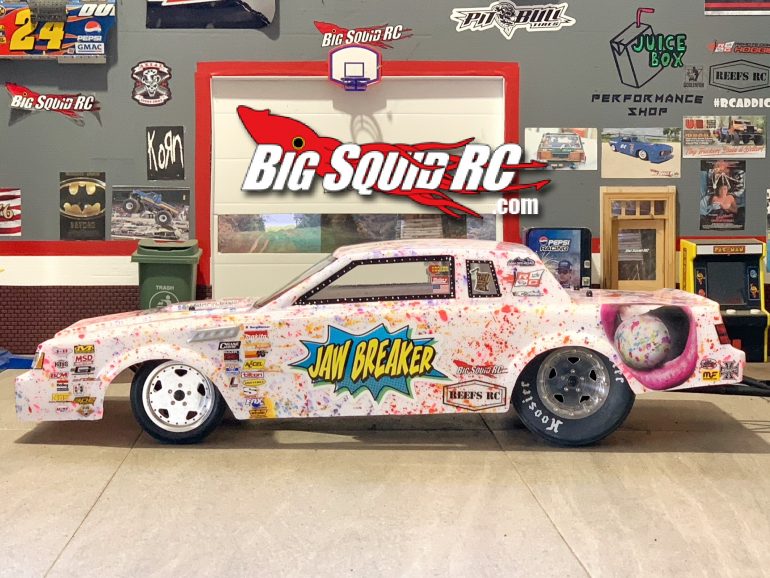 The Jaw Breaker! If you have seen over the last few weeks, I have been teasing images of the JConcepts Grand National drag body I have been working on. We got some wicked, and I mean wicked wheels from Reefs RC and Ruthless Wheels, the Tidal Drag Wheels to be exact. Machined right here in the good old USA, the Tidal Drag Wheels are some of the best made wheels I have seen and beautifully polished to top it off. After receiving the Ruthless wheels, I knew the body had to be just as insane, not wanting to another black Grand National I stepped outside of my box and tried something new. Splash paint jobs have always intrigued me and while thinking on how to do it a Jaw Breaker candy popped into my head, from there it was game on.

It has been some time since the last time I got to do a race car and I forgot how much fun they are. I used a bunch of different colors for the splash, to get the effect I sprayed a little paint into the cap, from there I dipped a paint brush in the cap and whipped it down towards the body. It worked great other than when I accidentally touched the body with the brush, but hey stuff happens right?

Best part of making race car bodies is all the stickers! Did a google search and found a Jaw Breaker image I liked and uploaded it to a sticker site I found, Makestickers.com . The site also had an option to make your own so that worked out great as a one stop shop type of thing. The window trim however I had to hand make, using strips of black vinyl that was cut out. Then I did some asking around on the drag racing Facebook pages and found an easy way to make the silver rivets for the trim. Using a paint pen you can dab it and it will leave a tiny dot, just make sure you do not have too much paint on the tip, or it will run.

Looking forward to getting the Jaw Breaker on the Track and putting those Reefs RC Ruthless Wheels to the test! So, stay tuned because its going to get good. Have a great weekend and get out and do some RC, till next time Keep Scalin!