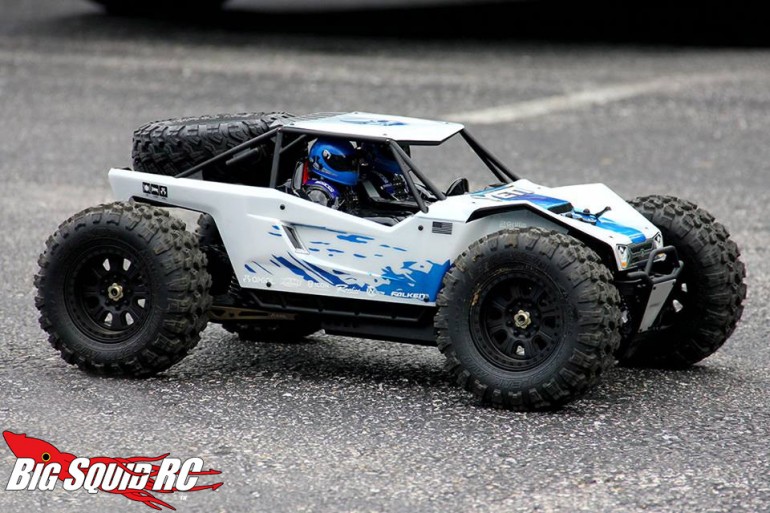 Sooooo….after the onslaught of news over the last week I think it’s pretty safe to say that large scale r/c is the new hotness. The industry has been trending that way for awhile now, but the X-Maxx will most likely blow it wide open.

With that in mind, plus the myriad of various large scale crawlers available on the market, I’m now jonesing for a proper large scale scaler. Now wait, yes I’m aware that the Yeti XL is a thing (a quite good thing, if fact), but as someone who has wheeled one it’s a hardcore bash machine, NOT a scaler. I’m talking about a vehicle with frame rails, solid axles, the whole deal.

While cost may be one of the most prohibitive things stopping a company from releasing one of these, I think it could be overcome if the vehicle is outfitted with the correct electronics package from the factory. I doubt it would be feasible to sell one with a big sensored brushless system, but perhaps a robust (and comparatively cheaper) brushed system would do the trick? That would allow the smooth throttle control necessary to crawl.

A beefy servo would probably need to be standard as your average 1/10 scale crawler has a difficult enough time turning the tires on rocks with standard RTR equipment. A big set of rubbers would need a good amount of oomph. The current crop of bashing large scalers get away with cheaper servos since the vehicle is typically at a high speed with minimal obstruction, therefore making it easier to turn the tires with gentle bump steer. That probably wouldn’t work well on a scale crawler.

A year ago I would’ve also lamented that a scaler of this size would have difficulty finding a place to run, but since then I’ve seen a good amount of big stuff out on the trail, even if they aren’t a traditional scaler (Yeti XL, Red Cat & Exceed big comp style crawlers) and they do fine as long as the driver isn’t being overly destructive.

While the current crop of 1/10 trucks can tackle some pretty crazy terrain, I’m salivating over what a well built 1/5th (or equivalent size) could do out on the trail. Heck, at that size it could pretty much drive the same stuff as the 1:1’s. I would LOVE to run in that class at a RECON G6 event!

The biggest possible negative I see with a large scale scaler? Getting a set of nice, machined bead lock wheels would probably cost about as much as putting a set on a full size Jeep!

Have a good weekend and keep it on all 4’s!