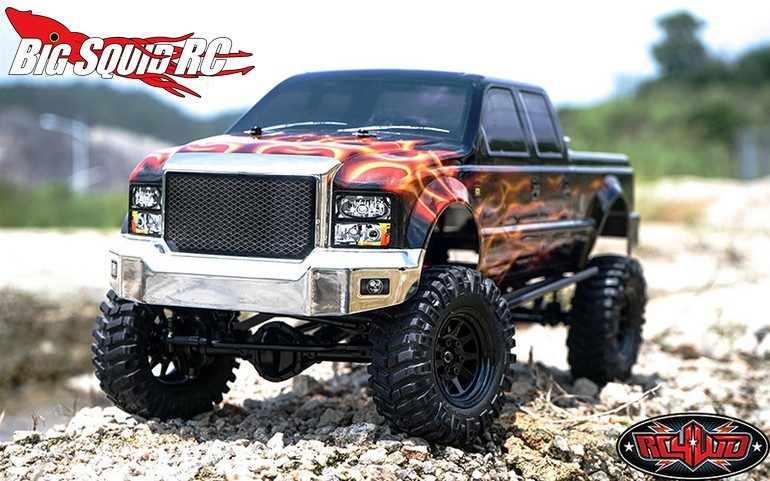 This new chassis looks to be an updated version of the Gelande platform with several notable upgrades. It comes out of the box with their K44 axles, which are really nice. I’ve never owned a rig with these, but several good friends have used them as aftermarket upgrades on Trail Finders and all love them. It has Punisher shafts. The tires are their Prowler 1.9’s that come in X3 soft & sticky compound, which resemble M/T Baja Claws.

The thing that most grabs the eye is the body, though. The Terrain comes topped with a Crusher lexan shell, which is a pretty close stand in for a late model Ford F250/350 Super Duty. (FYI the wheelbase is 320mm, right at 12.6″). This is what I want to talk about.

Isn’t it sort of bizarre that a model coming out with a late model pick-up body is sort of an oddity?

As popular as scaling has been the last few years and with the seemingly never ending slate of new vehicle releases, how many have actually used standard pick-up bodies?

Off the top of my head, I count 2; the Axial SCX10 Dodge Power Wagon (Ram pickup) and Gmade Komodo (unlicensed but similar to a Ford F150). You could maybe stretch that to the Tamiya Toyota Tundra Highlift, although that was released over 10 years ago and it’s more show than go. Maaaaybe the Axial Honcho, but that’s only a Toyota Tacoma cab, and an unlicensed one at that.

Ok, so the total is 3 and half trucks, and that’s being generous. Given how popular both full and mid-size pick-up trucks are, that’s crazy to me.

I understand why the companies release kits topped by classic off-road body styles, as those tap into our fantasy of having one ourselves. I’ll probably never own a 70’s Bronco or Land Rover Defender, so the novelty of having a detailed replica in r/c form is appreciated and not lost on me.

However, I can’t imagine there isn’t a sizable part of the market that wouldn’t enjoy, say, an Axial SCX10 II 2018 Chevy Silverado, Vattera Ascender Nissan Titan or Traxxas TRX-4 Ford Raptor. With the Chevy Colorado becoming popular and Ford Ranger set to make a return stateside, something smaller could work as well.

And yeah, I get that many modern rigs aren’t solid axle front and back, but I don’t think the majority of hobbyists would really pay much attention to that. And heck, if it’s that big a deal then have the front be IFS!

The aftermarket can help with many of these but even at that, there aren’t a ton of late model offerings that easily fit most scale chassis at the correct width and wheelbase.

With so many classic bodies being offered already, I think soon we are going to see a trend of scalers being released in popular modern day pick-up styles.

When the day comes that an officially licensed 1/10 Chevy Silverado crawler is announced, you bowtie fans can rejoice- for once you can just carry home your broken truck versus having to push or tow it! Ford 4 Lyf 🙂