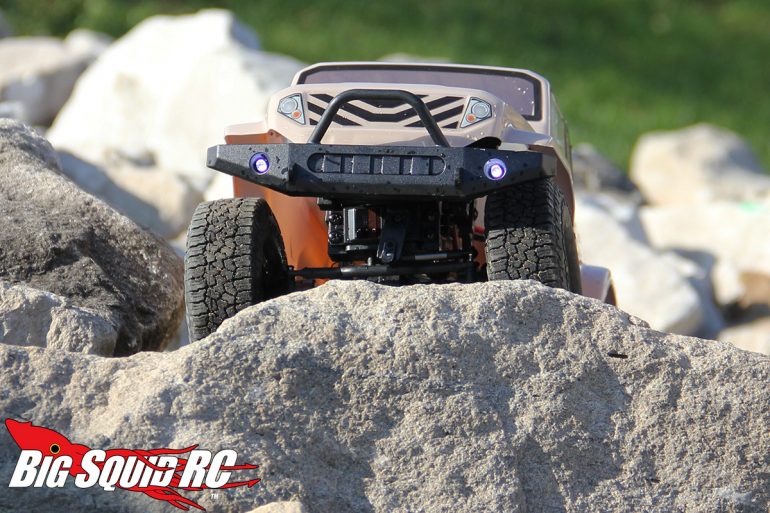 Crazy to think that it’s already December and 2016 is nearly at an end. It’s been an interesting year in scale crawlers, one that saw the explosive growth of the past few give way to maturity. Most of the big releases were not new platforms but refined and updated versions of previous kits (Axial SCX102, Vaterra Ascender, RC4WD Trail Finder 2).

Well, at least that’s the case when it comes to 1/10 trucks. As of late though, mini trucks are all the rage. Pro-Line, RC4WD, Axial, ECX….everyone is getting into the mini game! (Shameless plug, but our review of the 1/12 ECX Barrage goes live next week. The pic above is a sneak peak). Mini crawling is super hot right now and very well may be what 2016 is remembered for.

I think we finally go large. Large scale, that is.

Yeah there are big crawlers on the market, but they are all competition style vehicles and….well let’s just come out and say it- they look garish.

I think a large scale traditional scaler would be amazing and a lot of folks have been clamoring for one ever since the Yeti XL was announced a couple years back. In early 2015 there was a photoshop going around that depicted a large scale Wraith. It had a lot of people fooled and excited for the “product”, which of course wound up being a hoax.

A 1/5-ish size large proper scaler, like an SCX10 or Trail Finder 2, would be amazing methinks. I’m salivating thinking of all the crazy stuff I could get into with one. Can you imagine a trail run with a boat load of these?

I’ve never gotten into large scale trucks because I’ve simply never had the proper room to enjoy one. Something like an X-Maxx or 1/5 Losi chews up space at an insane rate. A big trail truck wouldn’t have quite the problem given that it would have a slower speed and be set-up to crawl, not haul.

Price would definitely be a big point of contention, but I think if the truck was cool enough and had a proven manufacturer attached to it (RC4WD, Axial, Vaterra) it could move some units somewhere in the $800 range.

Hey, if 2016 was about going small then I think 2017 is going to strike back by being all about large! If the Axial SCXL or RC4WD Trail Finder FIVE would be announced, I think there would be a shocking number of folks to get in line for one. Each of the aforementioned companies have released bigger vehicles before, just not THE vehicle. I think that’s all it’ll take to get the ball rolling.