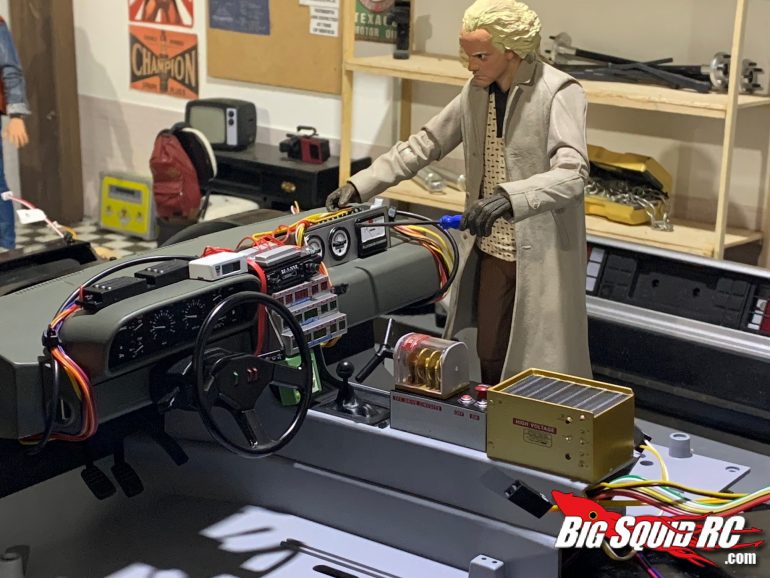 EVERYBODY’S SCALIN’ – OUT A TIME!

What is going on Everybody, hope the week has treated you well and the Rc Gods have kept your rigs in good shape. For me, this week has been a very productive one with a lot of rigs for The Ultimate Scale Truck Expo near completion.
2020 was a nightmare for me as well as it was for most of the world, lost my Grandpa and a few friends, had surgery for the first time on my dominant Arm, followed by 5 months of physical therapy. At one point I did not think we would be able to get it done but every time I would say that to our buddy Greg Holman, he would assure me that team Scalin’ Squids would get the job done!

This years USTE builds are all a Team effort with both Greg and I putting in work together on the Rigs, we have be able to do some wicked stuff! There is one rig that has gotten a lot of custom fabrication and that is The DeLorean. Since the Eaglemoss DeLorean kit is 100% a static model Greg had his work cut out for him when it came to making it Rc. I knew what needed to be done to make it rc but also knew my skill level when it comes to that is exceptionally low and I would not have gotten the results I wanted. Luckily, Greg has that skill level to do so and has turned the DeLorean into a fully functional remote-control car much like the real one from the movie.

The rear axle of the DeLorean had to be fabricated as well as the front end for the steering while still utilizing the stock wheels. What worked in our favor was that fact that a real 1.1 DeLorean has the engine in the rear leaving a lot of room to work with since we did not need to build the fake engine. If you have ever seen a Rc Pulling Truck then the DeLorean set up might look Familiar, gear on shaft straight to the motor and the motor we used was a Holmes Hobbies crawl master Sport, so I have no worry about it moving the heavy car. The DeLorean’s frame and body are made from steel and if I were to make a guess I would say when it is all completed it will weigh about 20 to 30LBs, now that is just a guess and will have an exact weight once it is finished.

When it comes to lights and stuff like that, I tend to keep my rigs basic, easy to work on and Less wires to get confused by. The DeLorean is a different story, who would of thought that a time Machine would have so may WIRES lol, as of now I am up to about 40 lights with a lot of the scale wires for the interior having to be hand feed through one at a time. But it is totally worth it, show me another Rc that the break lights will light up when you push the scale pedal, door light, light in the trunk and of course a Flux capacitor. This is a once in a lifetime build so every detail no matter how small makes it worth it.

After 3 years of collecting parts every month it is so rewarding seeing it being build and of course I’m having a blast with the Neca Back To The Future figures. Turning a dream into a reality is what scale rc is all about, no matter what you are building if you have a passion for it, it will show in the result! Have a great weekend and we hope to see some of you at The Ultimate Scale Truck Expo February 19th-21st, until then I must get back to work so keep Scalin’!!