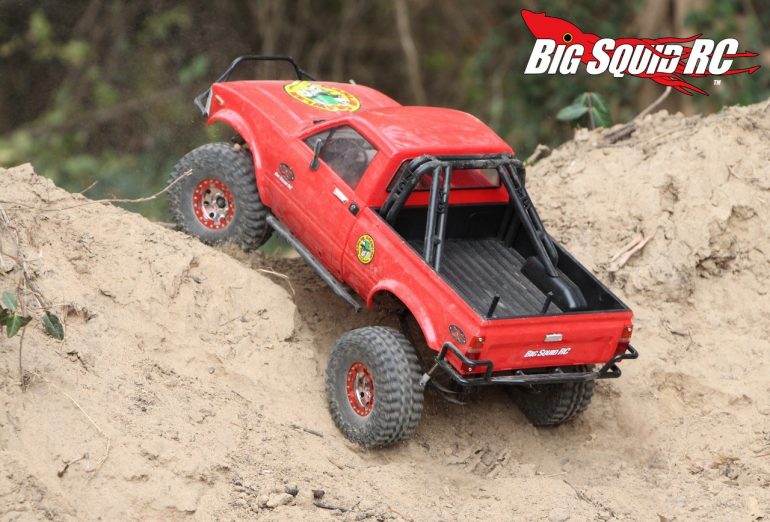 I’ve been really wanting to talk about the RC4WD Marlin Crawler Trail Finder 2, but had to wait until after the shootout went live. I can now discuss it in full!

The most impressive vehicle to me was actually the Marlin. No, it didn’t outperform many of the trucks it was doing battle with, but it managed to hang with ’em. Why the big deal then? Well, it’s a leaf truck.

I’m sure some folks are wondering why the Trail Finder 2 was included, given that the rest of the vehicles were of the linked performance variety. RC4WD actually insisted that it be included as they wanted to show that this truck could duke it out with the others. This was a pretty ballsy move and I think they should be commended for it. Trust me on this, many manufacturers do not like their wares taking part in any type of comparison test when the field is relatively even. To not only agree to take part, but demand it, when going in at a real disadvantage, well, you don’t see that much.

As it turns out, I completely understand why they wanted to do this.

I feel pretty safe in saying that as far as leaf spring trucks go there is nothing on the market that even comes close to the capabilities of the Marlin. At least not when talking about “out of the box” performance. I’m a big fan of this scaling sub-genre and have owned and driven all the other major players in this specific category (ok, never a Bruiser, but I’m not made of $$) and nothing holds a candle to this.

The Marlin is loaded with pretty much every option part that the company currently offers, and this is immediately felt. The leafs are soft with great articulation. The shocks have a smooth action. The drive train is solid. The tires are comp-grade compound and super sticky. It just doesn’t feel like your standard leafer.

For the crawling test we used a 1.9 comp course at a local hobby shop, a spot that I generally use in each of the reviews I’m assigned. The previous Trail Finders I’ve driven here could not make it through. The Marlin did it without really breaking much of a sweat. It was actually shocking to me.

It has also proven to be extremely durable. None of the vehicles in our test broke, perhaps none more impressive than the Marlin given the circumstances. It’s rock solid.

Ultimately the truck IS still a leafer though, and when the going got really tough this showed. That is nothing to be ashamed about though, as these trucks are ultimately just different types of animals that offer a different flavor of the scaling experience. Many people, like myself, enjoy the finesse it takes to wheel something with a realistically limited suspension and crawl like many 1:1’s do. Still, this TF2 punched WAY above its weight class and hung with the 4/3 linkers.

If you’ve ever wanted to try your hand with a more realistic leaf spring rig, the Marlin is the one to get. Not only is a great performer, I believe it’s the best truck RC4WD has ever released.