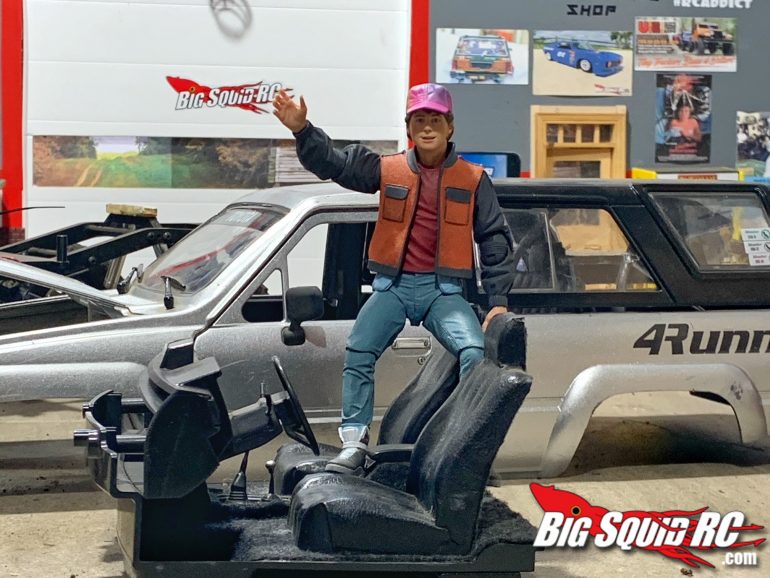 Hello everyone and thanks for checking out this week’s Everybody’s Scalin’! If you’re on the Big Squid RC Facebook group or follow me on Instagram @everybodysscalin, you have most likely seen some of the NECA  Back To The Future figures I have acquired so far. One thing I will say is each Marty figure I have now I bought at the store, the one I pre-ordered in MAY from Dorkside Toys has yet to even be shipped. So, if you are interested in the figures, I would suggest buying them from anywhere other than Dorkside Toys!

Other than my pre-order dilemma I am very excited to be able to intertwine two of my passions, the love for RC Scalin’ and Back To The Future. For a few days I was thinking about how to get the figures to fit better in the RC4WD interior. Now we all know you can just cut the feet or even take the legs off to get the figures to fit. The newer RC4WD bodies however have enough room for legs, the problem is the figures sit to high in the set. Most common fix to this problem is shaving the butt and legs to bring the figure down into the seat. It is a good mod but what if you still want too to keep the figure intact? You know for those outside of the rig pictures or scale shop shots, a mutilated figure can ruin a scale shot and take the 1.1 effect right out of the equation.

Then I thought what about cutting a hole in the seat, thus dropping the figure down into the seat more and keeping the figure in one piece. Rather than just doing it and hoping for the best on our RC4WD 1987 Toyota xtra Cab interior, I decided to test it out on our RC4WD 4runner since the interior is similar. I have stopped using glue on the steering wheels so if I ever have to mess around on the inside of the rig I can easily pop the wheel off like a race car and have that much more room to work. If the driver has thunder thighs this will also help by being able to place the driver in the seat without having to finagle the legs around the wheel. 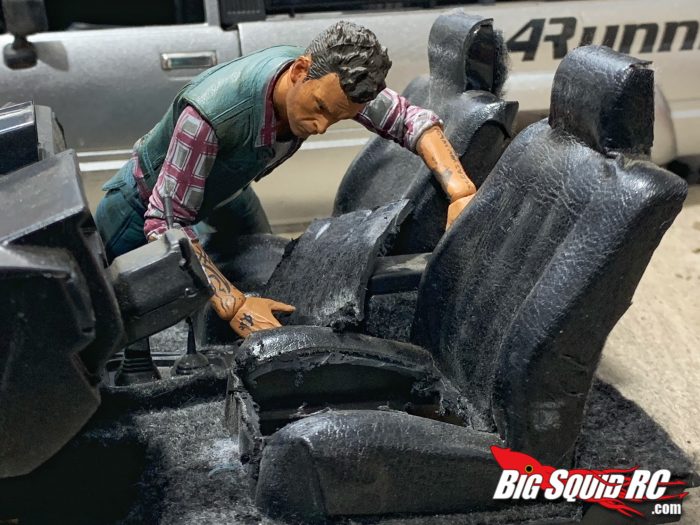 After cutting the seat hole I took some leather material I had, and laid it over the whole. Then I sat the figure in the seat pushing the leather down into the hole creating a bucket basically. Now if you just want to cut the seat hole and call it good you could definitely do that, but I didn’t want the seat to look funny when a figure is not in the rig. Once everything was back together, I was incredibly happy with the results, now Marty doesn’t look 8ft tall, and fits in the rig very well. I figure when I do the seat hole mod on the 1987 Xtra cab it will cosmetically look better, giving I wont have to do a patch for the seat hole and can use one solid piece of material for the whole seat.

If you ever have an idea for a mod, I suggest testing it out on something else if you can. Nothing worse than destroying something and not having a backup plan. This little mod has got me looking at all my seats now and even thinking about doing something similar to the Farm Truck. 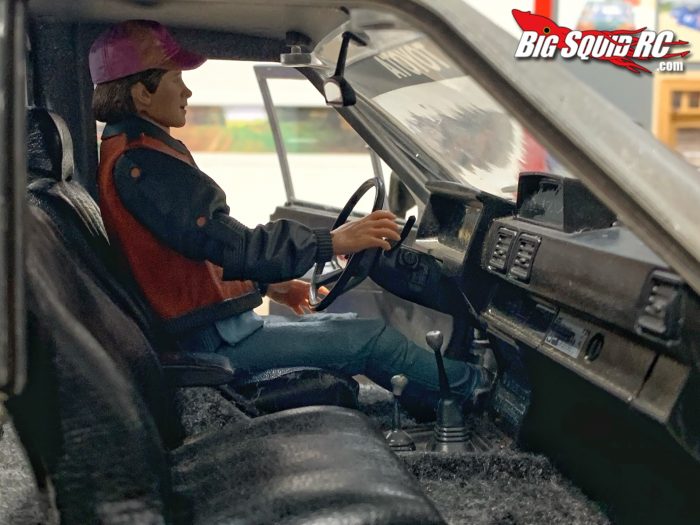 That’s brings us to the end of this week’s Everybodys’ Scalin’. hope this little mod can help and as always Keep Scalin’!