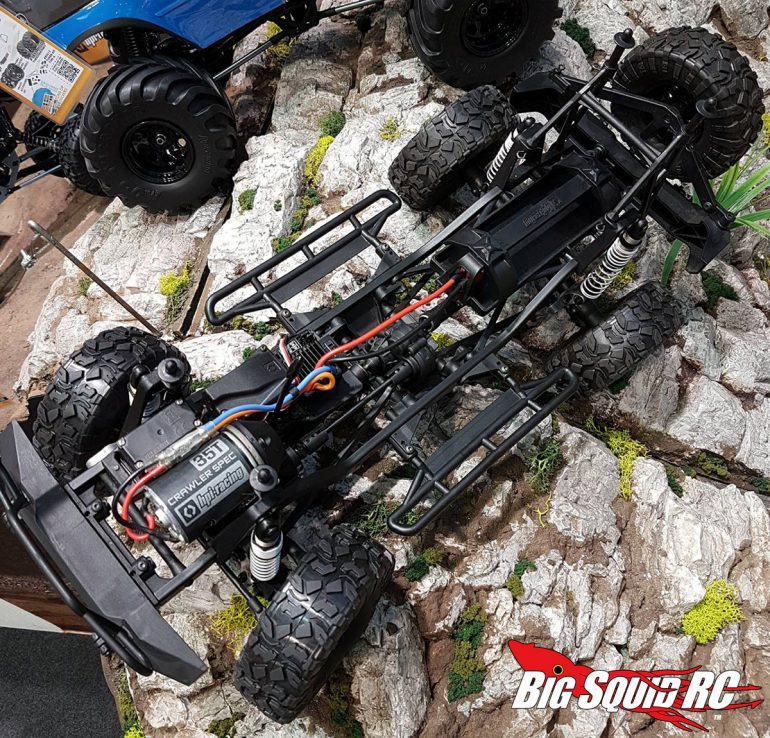 It may of taken awhile, but the HPI Venture FJ is finally about to see release! Ahead of that, official specifications have come out and there are some interesting things to discuss, for sure.

I’m going to hit on what I find to be the most interesting aspects of the rig, but you can view the whole spec sheet right here.

It’s great to know that the Venture is going to come with metal transmission gears right from the factory. This is a great decision, as for many hobbyists plastic gears are the first thing that need to be replaced. The Venture should be ready for a high torque/rpm brushless system right out of the box.

Speaking of the transmission, its setup is very interesting. The motor is mounted to a small transmission way up front on the chassis, which then mates to a central laydown transfer case on the center skid and connects via shaft. Very cool. It’s similar to how an RC4WD Trail Finder 2 is laid out.

The little ‘Yota has a chassis mounted servo setup as all serious modern scalers do, but the behind the axle steering getup looks especially trick. This really helps maintain a more realistic look as well as protects the arm from rock rash. It also comes equipped with zero Ackerman knuckles.

With the motor and steering assemblies mounted up front, it should allow for a nice weight bias to help when climbing. All of the real estate that’s occupied by the aforementioned stuff means the battery goes in the back, and while this is speculation having never had my hands on the truck, I’d say that’s probably fine. Your average battery is going to weigh much less than all that metal on the front of the chassis.

The aluminum 4 link mounts that clamp onto the axles look super beefy which should help keep a good amount of weight right where it needs to be to further plant the truck.

The last thing I’ll hit are the tires. The HPI Rockthorns look gnarly as hell sporting a hyper aggressive tread pattern. They are molded out of “S” compound, so we will see how they hold up when we get one for review. If they are sticky, they could be really sweet on the rocks given the tread.

The tires are sized right at 4.2″. This goes against the current trend of jacking all 1.9’s up to the sky and I applaud HPI for reeling it in a little. Not every vehicle needs to have gigantic tires!

The elephant in the room has always been the release date, but HPI is hoping to have these hit American hobby shops by early Summer. We aren’t far off now.

As the stream of info on the FJ increases in strength as the release grows near, I see a good number of folks posting stuff like “too little, too late” in reference to the aforementioned delays. I just don’t agree with that line of thinking.

The Venture is going to hit in time to slug it out with the new Traxxas vehicle, as well as the stalwart offerings from the likes of Axial, RC4WD and Vaterra. This upcoming summer and fall look to be a crazy time for those into scaling, as all the heavyweights in the hobby will officially be throwing down.

Something is only delayed until it’s released, at which point it’s then either good or bad. That’s the important thing for the Venture FJ- if it’s good, it’ll more than likely succeed and all this delay nonsense will be a fleeting memory. Here’s to hoping HPI got it right.