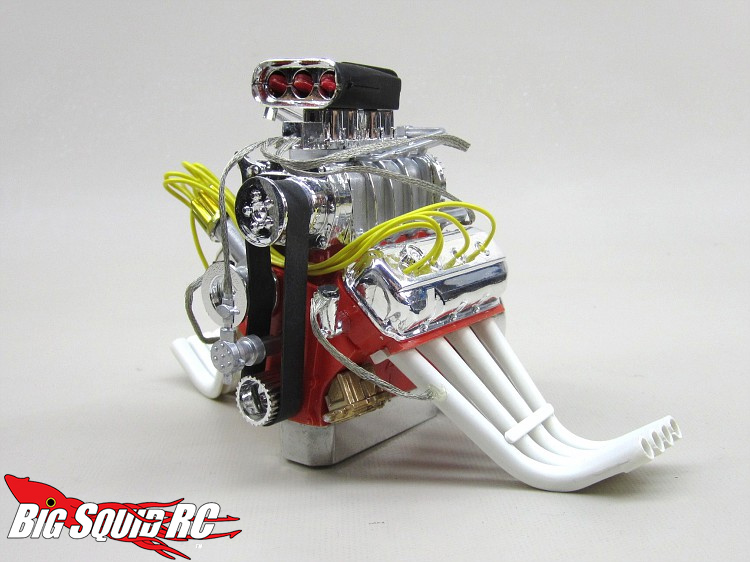 Everybody’s Scalin’ – That Thing Got A Hemi?

Just a few years ago it was really unique to be able to purchase a scale Hi-Lift Jack. Nowadays anything you can purchase for a 1:1 rig you can find in 1/10 form with relative ease. I mean come on, you can get a freakin’ beer keg and set of Red Solo Cups! Yep, scale accessories are all the rage.

While these super specific items may be relatively new to r/c, pieces of more general scale swag have been around for awhile. No, the selections were never as various as they are now; or as niche for that matter – scale ladder anyone? – but certain things were available for the hobbyist who wanted their ride to look realistic. Especially when it came to engines.

A lot of folks used to offer detailed bolt-on headers, supercharger hats and carburetors. The back pages of r/c mags and mail order catalogs used to be filled with small companies offering all sorts of hardware to replicate a person’s engine preference of choice.  Nothing made a Blackfoot look cooler than sticking a huge blower on top of the hood!

All off these scale mills were cool, but there was one kit that stood out – the Parma Hemi.

The Parma Hemi was an incredibly detailed plastic model kit that replicated the famed Chrysler 426 Hemi in 1/10 form. This was a true kit- it came un-assembled and the various parts and pieces needed to be painted and glued together, right down to the spark plug wires. When finished properly they looked amazing!

I built one in…umm, 1999 I think? I wound up dropping it in a stock Tamiya Clodbuster and it looked great. Sadly, no pics of this truck exist but friend Mike Lohmann snapped me a pic of his Hemi-equipped monster to share. Oh, and that sharp hot rod above? That’s Bobby Watkins’ vintage Parma Hemi Coupe.

The Hemis were introduced in the early 90’s and have been discontinued for a very long time, but that hasn’t stopped them from having a following. Kits are still sold on eBay (for a mint!) and if you know the right person with a 3D printer it can be completely customized with different pipes, heads….you name it.

One can’t help but think that with the explosion of scale, Parma would be well to do to fire up the mold and start cranking out those replica pieces of Detroit iron again. The Axial RR10 is practically BEGGING to have one of these bad boys dropped under the hood.

So let’s pour one out for the Hemi. For my money it was the coolest scale accessory ever produced. It looked as good as it was fun to build. Let’s hope that one day we see it (or something similar) enter production for the masses again!