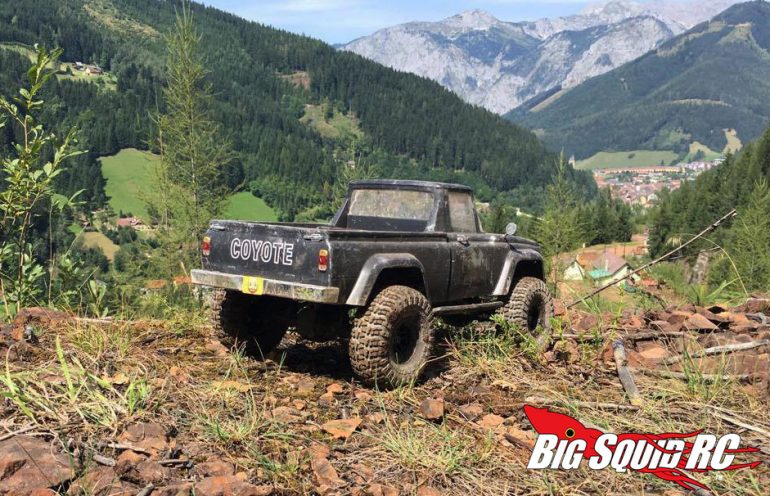 Let me start off this holiday weekend edition of Scalin’ by sending my well wishes to all of you Texas and Louisiana readers. I also wanted to give a big “Hello” to my friend Howard from Houston, TX. He owns a HobbyTown USA and, while it sounds like they were spared from the flooding, I just want to let you know that I’m thinking about you, buddy! As awful as the situation is, it’s been very cool to see how the region has come together with bands of strangers working as rescuers and helpers.

So late last week Carisma finally released all the details on the scale truck they had been teasing, the SCA-1E Coyote RTR. I’m typically pretty skeptical when a company that has no previous experience with crawlers releases something for the genre, but in this case I’d say it looks pretty dang promising.

The Coyote recently completed an ultra-tough Pro-Line Racing RECON G6 Fix event, a 12 hour endurance race, to become G6 certified. This is a pretty cool story related to that (as well as the development in general), that was posted on Carisma’s Facebook page. Here is the excerpt, written up by Peter Gray, Brand Manager for Carisma-

Nearly 4 years ago, while working as a magazine journalist at the Nuremberg Toy Fair, I visited Ivan Carisma on his stand and told him that he should release a scale rig. In fact, I told him that I couldn’t understand why, when he was so well respected for his realistic body shells, well designed and robust products, that he hadn’t already.

I also said that hitting the right price point was vital it getting people into the hobby and facilitating those who want to try scale to be able to for a reasonable outlay. I’ve known Ivan many, many years. He simply listened to everything I said and then smiled and said: “When I do it, I’ll do it right…or not at all”

Jump forward to late August 2017 and I’m now not only Brand Manager for the new Carisma Scale Adventure product line, but also have also been responsible for the co-development of the initial range, some very cool future product lines, and have been working behind the scenes setting up the brand for nearly a year. The journey has been long, the path far from smooth, but the end result is that our first product, the SCA-1E Coyote RTR (only announced on the 25th of August), has just been Recon G6 Certified after completing a gruelling 12 hour ProLine Fix Enduro at the StoneRocker Festival, on the Iron Giant, Erzberg, Austria. We even came second in the team event…a huge achievement.

What’s even more amazing is that the team we put together lead by American Scott Curlin ran a completely stock RTR, fresh from the box. We did this for two reasons. First to prove the viability of the platform. And second to show that this hobby doesn’t have to be expensive. A well made and thought out product can mix it up with the best of them.
To put it all in context, the rigs our RTR Coyote was pitted against were mostly purpose built from high end components, and costing multiple times what ours does.

The SCA-1E itself was faultless throughout, with not one technical issue or breakage. The only thing done to the rig prior to the event was to check it over and weight the front wheels, as instructed by the manual. We even left it with the stock rear mounted battery position, we call trail mode. Myself and the whole team involved are proud to present this product to distributors globally, and welcome all new enquiries from any territories not already covered. We expect to start shipping mid September with a confirmed street price of $300 (£239.99).”

Now look, while you could easily say that the story is marketing hooplah, the fact of the matter is the truck performed when it had to. I’ve competed in several of the G6 events (not a 12 hour one though), and I know the hell they put a vehicle through. I know founder Brian Parker, and he takes the “G6 Certified” badging very seriously. So yeah, the Coyote earned its stripes.

It also looks really sharp, I think. I dig that truck body. Having other things standard like a winch mount and hitch are really nice details as well. It shows that they are in tune with what the scale community wants.

While we won’t know for sure until we get one in our hands, it’s looking like soon scalers will have yet another quality rig to choose from.

Be safe out there this weekend, and Happy Labor Day to all of our US readers!