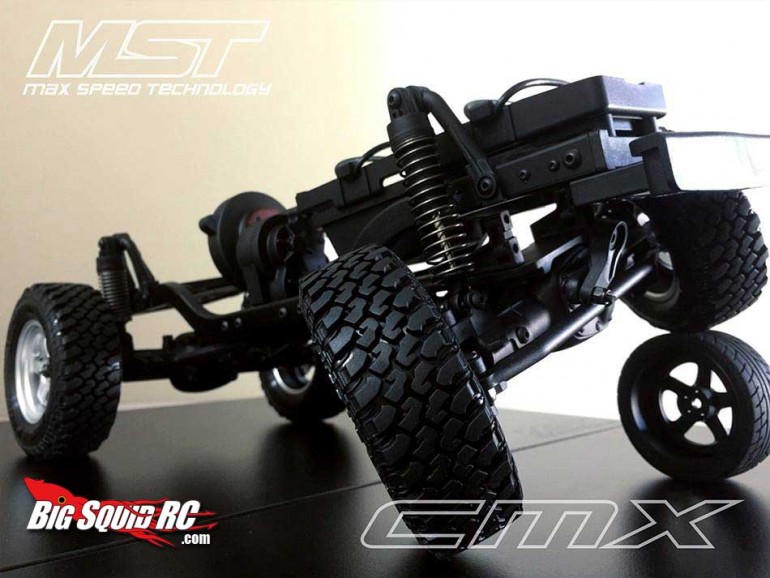 The next big release in the scaling world is about to happen, this time from a very unlikely source – MST (Max Speed Technology). Launching next week, the MST CMX is the companies first foray into the genre and is being offered in several different kits with various body options. You can look at this article to see the array (hooray Unimog!).

While they are new to scaling, MST is well known in the drift community for offering a myriad of quality chassis. They have a pretty ravenous fan base in that neck of the r/c woods, and there is a good chance that this truck may entice a slider to try crawling.

I’ll be blunt – when the truck was first announced a few months ago the renderings looked unimpressive to me. However, the final product (in pics and video) looks like a very no frills, stout truck. I’m a fan of short wheelbase rigs so that’s another plus.

The main thing that I see as a potential problem would be, again, just from the pics released thus far, perhaps a driveshaft angle that’s awful steep. They may have ironed this out in the production version though.

The only other big question I have is whether or not the shocks are decent. That could make or break it. There are otherwise very nice scale crawler kits available that are hamstrung by garbage shocks. Yeah, you can upgrade them but that’s typically another $100 added to the price and for a kit truck that’s a tough pill to swallow. Hopefully they are up to the task.

MST has traditionally had a limited presence here in the States, focusing more on eastern markets. One has to wonder if this new rig is their attempt to try and hit it big in the good ole US of A. That remains to be seen.

I’ll obviously reserve judgement until/if we nab one for review. It definitely sure looks the part though. Sometimes simplicity is a great thing.