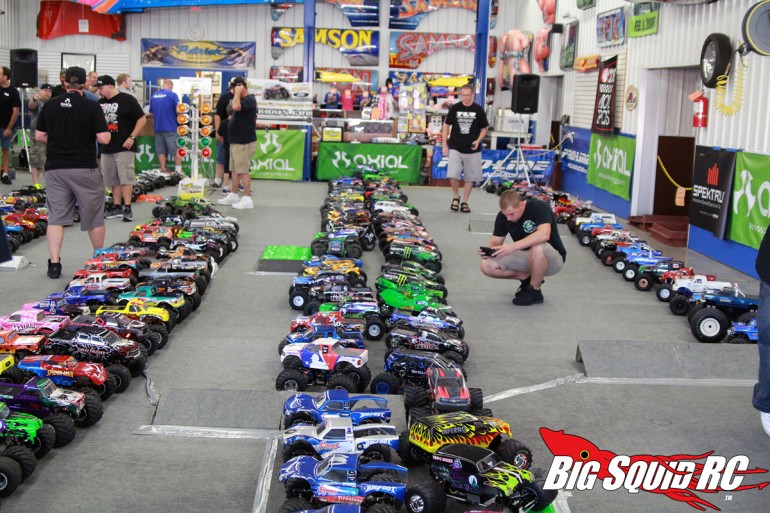 Everybody’s Scalin’ – The Relationship Between 1:1 and R/C Monster Trucking

Last weekend was a big one in the world of scale monster trucks as the 4 Link Nationals took place in Circleville, OH. Sporting a massive turnout of trucks, drivers, and manufacturer support (Axial, Pro-Line, Tamiya, Parma, Spektrum, RC4WD, Castle, and JConcepts), the solid axle monster truck scene is as healthy as it has ever been.

But I’m not here to talk about the event as, sadly, I couldn’t attend. I was filled in by fellow truckers that were there, however, on just how great it was. Also, props to Stephen Hopkins for giving me some awesome pics to post here.

What I DO want to talk about is a subject that the race brings up. There is a very interesting link that these events seem to share with their full scale counterparts, and last weekend was a great example.

Patrick Enterprises Inc. (PEI), aka the home of Samson 4×4 and the shop that is responsible for many of the 1:1 monsters you see thrilling stadiums around the world, let the crew of High Voltage R/C transform their work space into a scale arena. Seeing the full scale guys open their doors to their radio controlled brethren has become increasingly common in this genre.

For several more recent examples, over the past few months their have been big r/c monster races at the home of BIGFOOT 4×4 in St. Louis, MO and Digger’s Dungeon (Grave Digger) in North Carolina.  Those names are as big as it gets in the sport.

It doesn’t just stop at location. If you are attending one of these races there is also a better than average chance that you’ll find yourself in the other lane against a current or former industry member – specifically drivers.  Yes, a lot of the same people turning wrenches and thrilling fans in stadiums with a 10,000 lbs monster are also turning wrenches and running their 1/10 scalers just as hard. It’s something very cool that I really enjoy about this segment of the hobby.

Speaking as someone who has drawn a paycheck in the monster truck business for many a year (with a certain big blue Ford) and that’s also a longtime hobbyist, the explanation I have is that r/c is simply interwoven throughout the fabric of the industry. Many of the people that are now employed in the monster truck world grew up with it as kids in the 80’s/90’s and as such played with toys and r/c trucks to get their fix. As we got older and and started actually getting jobs with promoters, teams, and media within said industry, our love of the hobby stayed with us and pollenation occurred. Now it’s hard to go to a real show or shop without seeing 1/10 versions somewhere nearby.

All of the drivers that I know on a personal level LOVE to tear sh** up (that’s kind of a prerequisite for the job) and the scale r/c’s are a great way to get a fix of that without racking up a 50k parts bill. Speaking with my friend Bari Musawwir, both a championship level driver with Monster Jam AND hardcore r/c monster trucker, he says it also scratches the same itch competitively. In fact, it helps him stay sharp when he’s out of the cockpit since many of the same physics apply.

As scale monster trucking continues to grow in popularity, it’s awesome to see the support given by it’s big brother. I’ve never seen any other form of r/c have such a tight relationship with the “real thing”. Where some motorsport groups look down on r/c as being dumb toys, I’m happy to report that most within the 1:1 monster truck industry see them just as they see the big ones – toys. The only difference is the size of the thrill and price of admission.