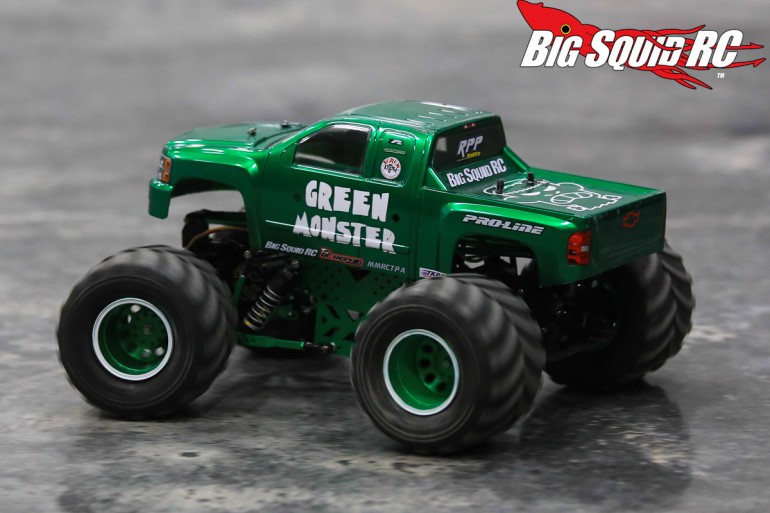 Everybody’s Scalin’ – The Wheels In the Sky Keep Turnin’

With all the new scale crawling news that has been seemingly breaking each week since mid October (more on the Venture FJ next week as at the time of this writing Thursday there wasn’t much info available), some of the other stuff going on can fall through the cracks. One of said news pieces is the monster truck wheel from Pro-Line Racing which was teased late last week.

You may say to yourself, “Really, a monster truck wheel is news worth discussing?”. Well yeah, actually it is if you run a scale monster or have any interest in perhaps ever building one.

For the longest time, the wheel has been the elusive piece of the puzzle when building a high performance solid axle race monster. Whether you wanted to go with a Tamiya Clodbuster motor-on-axle truck or an Axial based shaft drive, the wheels proved to be the toughest part to get.

Most modern monsters, like all of the ones pictured here (including my personal truck, the Big Squid RC Green Monster) must run small batch, custom made wheel wideners to get the clearance needed for the trucks to have a decent turning radius and not knock the 4 link bars. In the case of Axial axled rigs, wheel wideners that adapt to Tamiya monster truck wheels are mandatory as otherwise they cannot fit. This is quite the conundrum for some people.

Ok, so let’s say you know the right person to ask and have scored a set of wheel wideners. Well, now you need an actual wheel that will hold up. Yeah, you can run weak stock Tamiya Clod wheel if you want to constantly replace them, but for something that lasts you would want the increasingly rare Tamiya TXT-1 wheel.

This wheel looks similiar to the Clod getup but is much more durable with large mounting nubs and reinforced plastic. They came stock on the Tamiya TXT-1 which was available over a decade ago. When Tamiya released the TXT-2 they made the terrible decision to switch to a goofy wheel/tire combo that no monster trucker wanted, and therefore the fantastic TXT-1 wheel was left in limbo. They are still made, just in smaller quantities. When they do pop-up for sale they are snatched up quick and normally fetch a high price.

Enter the Pro-Line setup. PL was on one of the monster truck boards that I frequent dishing some 411 on the new product and they sound awesome. They will be available in two different versions – stock Clodbuster and wide offsets. They will also have a 12mm hex built in so both Tamiya and Axial based trucks can be used with no wideners/adapters. HALLELUJAH!!!

As a cherry on top, it looks as if they also have scale planetaries as the wheel nuts or nut covers. For those that don’t know, 1:1 monsters use planetary axle ends as a final gear reduction at the tires. This helps complete the scale look.

So hopefully that brief diatribe explains why a quality, high performance wheel with built in offset is a big deal. Now it looks as if anyone will be able to build a solid axle monster truck with relative ease (heck, just this week STRC announced a complete Axial conversion kit which just adds to the other ones currently available).

Pro-Line has quickly endeared themselves to the scale monster trucker. Their recently released Destroyer tire is pretty much mandatory for anyone wanting to do some serious bashing or racing with one so I cannot wait to mount a set of these on Green Monster for a full review. Look for that as soon as I can get my hands on them.

Also, big thanks to my friends Ross Bonar and Danny Maass (of the 1:1 The Monster Blog site) for the sweet pics here from our last club event.