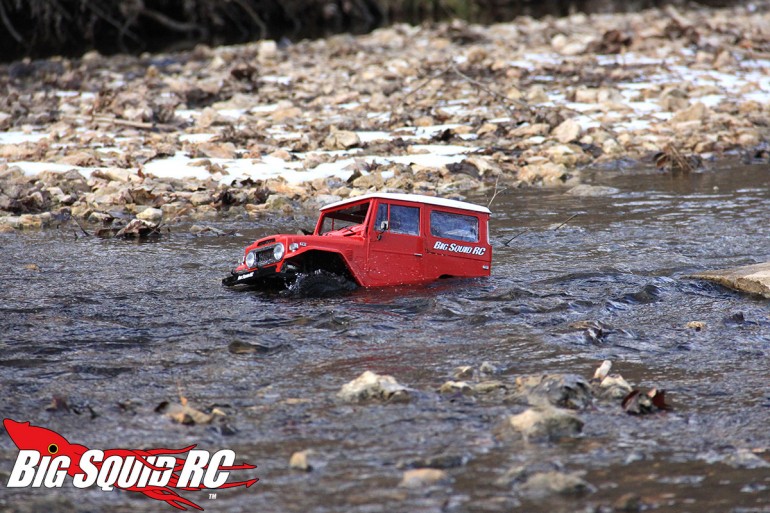 Everybody’s Scalin’ – They Call Me the Squeaker

We’ve all been on a run with The Squeaker. You know, the person whose vehicle makes an incessant SKREE SKREE SKREE on every revolution of the motor. Depending on the severity, this ranges from “slightly annoying” to “please kill me now”.

While not necessarily the result of a serious problem, this sound is the hallmark cry of a poorly maintained vehicle with odds better than good that it’s recently gone for a dip in the water and wasn’t serviced afterwards. It doesn’t have to be fording a river like the RC4WD Gelande Cruiser seen in the above pic, as even something as mundane as running through a puddle can cause issues.

90% of the time (an informal study) this is completely avoidable by hitting your steel / metal axle & transmission outputs with a little penetrating oil. It’s not technically a lubricant but it does the job just fine and works well for the application since it naturally wants to resist water/rust, thereby helping you out in later situations as well.

It’s a different story for your internals. Lots of people run their RTR trucks without any sort of gear lube, and this is a mistake. It’s not uncommon to pull apart a brand new vehicle and see that the factory in China went very skeet on grease. Sometimes there is none at all!

I like to pack my axles with marine bearing grease as not only does it keep everything gliding all smooth like, but it keeps crud out. I’ve yet to see a vehicle come like this from the factory, even the vaunted “waterproof” versions of trucks that are supposedly just fine with running through water. Just because the electronics can take a drink right outta the box doesn’t mean the rest of the rig can!

When lubing a transmission on a trail truck I liberally apply lithium grease on all the gears, but not so much that it causes them to seat improperly. If you clog them up you’ll run into all sorts of problems, be it a chewed up tranny or even a blown motor. You can use the aforementioned marine bearing grease on the output assembly so as to create a watertight seal.

Another source of chronic squeaking is a corroded motor bushing. If you are using a cheap brushed motor, as is extremely popular in the scaling genre, it most likely has a pair of bushings holding the shaft. Just a dab of 3-in-1 on each end can make a huge difference, sometimes drastically increasing the motor life as well.

Next time you find yourself in the company of a Squeaker, feel free to share a couple of these tips. Much like a 1:1 rig making a funky noise or vibration, it’s a lot cheaper to fix something early where the remedy is a simple shot of oil versus later when the culprit is worn out gears or shot bearings.

Given the crazy sounds a squeaking vehicle can make, you may also save your group from being attacked by a flock of birds that mistake the REE REE REE for some form of exotic mating call. Is this really a danger? You just can’t be too careful.