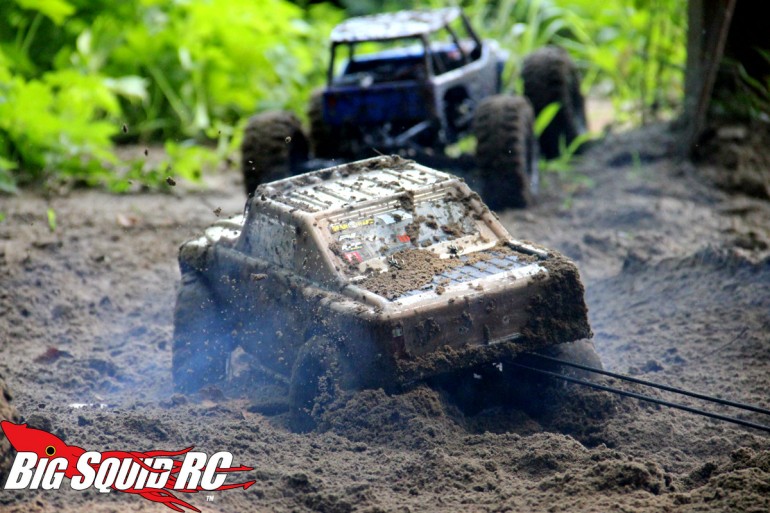 Ever since the moniker of “scaler” was given to an r/c vehicle that closely resembled a full size off-road truck, the term “scaling” has been used to describe the process of going out and running them. But what exactly does it mean?

I think the general accepted definition of scaling is “to go out on a trail run or go rock crawling with your scale 4×4”, but I’d like to think that has broadened significantly thanks to the varied usage these trucks are now seeing.

A modern scaler (or it’s main components) can be configured to do any of the following activities very well – Rock Racing, Formula Off-Road/Hill Climbing, Mud Bogging, Sand Dragging, Truck Pulling, Tough Truck Racing, Tug-O-War, and Monster Truck Racing. That’s off the top of my head, I’m sure somewhere there are groups of people doing other crazy stuff.

Even though I haven’t been on the trail much this spring/summer, I still feel like I’m very involved in the scale scene by proxy of doing other things with my rigs. Heck, the last couple weeks I’ve been modding my stock SCX10 to do….well you’ll have to wait a few weeks on that one, but it’s definitely not crawling.

To understand how I view the scaling portion of the hobby, let me first bring up one of my favorite tv shows of all time. AMERICAN. SPORTS. CAVALCADE. This boss tv intro still gets my blood pumping. Have a look –

For you youngsters, it was a variety motorsports show that encompassed all kinds of wildly varying stuff. One week it was NHRA drag racing, the next it was swamp buggies, the next it could be motocross. It was the greatest. You really had no clue what you were going to get.

That is how I view scaling. It’s my own personal variety show. Maybe one day I want to go crawl a creek, the next I want to race my monster truck, and then the following weekend go tackle an insane vertical hill climb. It’s all scaling to me. While it was the realistic look of the vehicles that sparked my initial interest, it’s their tremendous versatility that has kept me hooked.

In my eyes, it’s pretty easy to definite scaling. If your vehicle looks and behaves like the real thing, regardless of what it is or what you are doing, then you are scaling as far as I’m concerned.