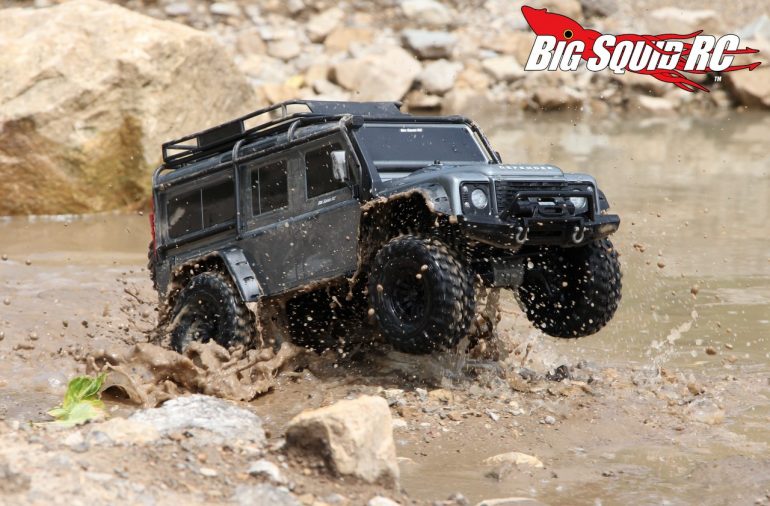 Everybody’s Scalin’ – When a Gimmick Ceases to Be a Gimmick

Another week, more time spent with our TRX4. I ****-you-not, our review vehicle has had more miles put on the odometer in one month than several of our scalers have had put on them during their entire lives. I’ve also never seen so much interest in a vehicle from the non-hardcore crawlers at BSRC. I mean, even Cubby is gaga over the truck, and let me tell ya, that’s impressive in and of itself.

My big takeaway thus far is that several of the features that I initially thought were just gimmicks are gimmicks no more.

The first is the two speed transmission. My stance on 2 speeds has always been that they were worthless because not only do they add a good deal of weight and mechanical complexity to a kit, but a good sensored brushless system renders them moot. After 3 weeks with the TRX4, I’ve come around on this opinion and feel that a two speed of this caliber actually enhances my enjoyment.

It really does a nice job of providing the standard low end grunt that you expect from a scaler while in first, while also giving you the ability to get good wheel speed in second and have fun zipping around. The fun of shifting can’t be discounted either, as it’s just cool to have a vehicle that can do this.

While you could argue that a nice sensored system can give you both of these things by itself, it’s nice not having to plunk down the cash for one. As a bonus, you also don’t have to worry about smoking a high dollar system when you drive in the muck. And besides, the average driver of one of these things is NOT going to put an expensive motor/esc combo in it. They’ll get everything they want from the 2 speed and brushed motor. I just happen to be one of those people now!

The second feature that I’ve come to love are the remote locking differentials. I’ve touched on this in the past, but I’ll elaborate more here.

The majority of my time with scale crawlers is spent trailing- not hardcore crawling, but actual trail driving. Yes, when out on a run the gnarly spots are the most fun bits, the ones that make for the best pictures and the ones you remember…but a good 75% to 80% of my runs are spent on loose dirt or grass paths. You know, traveling TO the good stuff. Having open diffs (along with that second gear) sure makes the trek a lot more fun.

It’s also a good time horsing around in the parking lot. While the TRX4 will never be mistaken for a 2WD stadium truck or touring car, it still handles pretty decent with everything set to open.

Once it’s time to get down to business you can lock the axles, throw it in the plow gear and let it do work. It’s great.

The secret sauce is the mechanical reliability. Thus far it’s all worked out great for us, and good gosh have we beaten the crap out of this thing. I’d think the average hobbyist, even one that isn’t great at turning wrenches, should be pretty safe with this truck.

Above all else, the dependability and ease of use of the TRX4 are what truly make the above mentioned things “features” and not “gimmicks”.

Ya know, when driving this thing I can’t help but think of how this truck has taken so many ideas that were present in the Summit and distilled them down to create this awesome scaler…but that discussion is for an upcoming Monster Truck Madness!

Have a great weekend everyone.