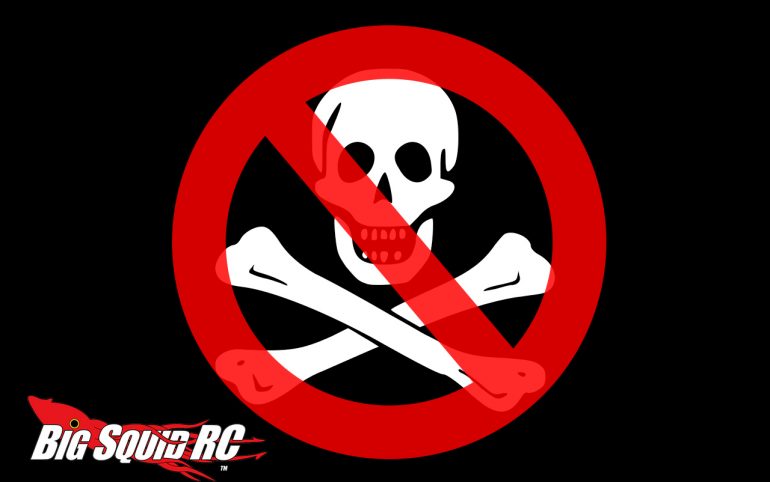 Everybody’s Scalin’ – Yar, Thar Be Pirates In These Waters

Piracy within the scaler community has gotten pretty crazy of late. No, I don’t mean someone has mounted a Galleon hull to a solid axle truck – though I’m sure someone has done that – it’s foreign made, blatant rip-off parts that I’m talking about.

This has always been a thing within the hobby. Heck, last month while Christmas shopping I saw a kiosk at the mall that was selling knock-off HPI vehicles with similar logos/packaging to the real thing! In the last two years it’s really been coming on strong with scaler gear and kits and it’s sort of hit fever pitch as of late.

I’m not going to link to these products as I would not want to give them ANY type of play like that but it doesn’t take a lot of effort to find out what I’m talking about. While machined parts being ripped off are nothing new, certain aftermarket scaling tires are now being copied directly (most likely with crappier compound). Ridiculous!

Look, I get that not everyone has the kind of dough to buy high-end stuff, especially when it comes to hop-ups for toy cars. There are more budget friendly companies that exist for this reason. Is the quality as high as the “name brand” stuff? Sometimes, but typically no. That’s fine. There is room within the hobby ecosystem for everyone.

The problem is when it’s direct copies of name brand stuff. This is IP theft and it’s illegal. If you are buying, say, knock-off Vanquish wheels from overseas…that ain’t cool, man. This kind of behavior is actively hurting the hobby.

Seeing people brag about “scoring a deal” from one of these joker companies and then talking smack to those who are “stupid enough” to purchase the real item at full price make my head want to explode. There seems to be a lot of it going on lately via Facebook groups and message boards. I’ll never understand why or how someone could brag about putting shady stuff on their rig and then have the audacity to call someone ELSE stupid on top of it.

I don’t ask much from you, but this I will. If you see someone pulling this kind of garbage, whether it’s online or at your local trail run, please let them know that the hobby has a hard enough time staying afloat as-is and that contributing to these pirates only makes it harder. Thanks.