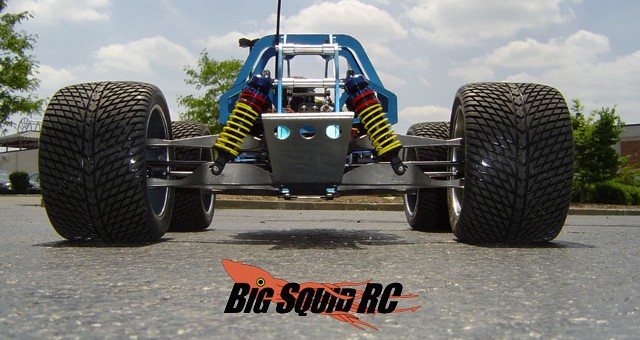 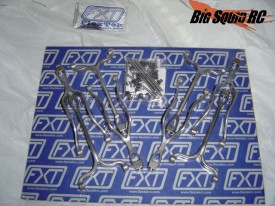 Being a pretty serious basher, (I usually don’t stop till it’s broken!) you can imagine that I end up having to replace a lot of parts at the end of the day. My usual routine has been, come home, inspect what’s broke, take off the a-arms and bend them back into shape if possible, and fix whatever else needs fixing. Let me tell you, aluminum a-arms only bend back into shape so many times before the metal gets so week, that normal driving causes issues with them. I was getting pretty tired of this routine, and when FlexTek released their titanium a-arms, I figured it was time to see if they could really take the abuse they say they can.

I’m a big fan of FlexTek for really standing behind their product! Many companies hear about us, and know that we are going to bash the heck out of their product, so they run scared! They try to set rules like “no higher then this” or “no faster then this” BAH! FlexTek told me have fun! I like that! 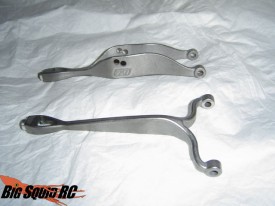 When the arms first arrived I was really surprised by the way they felt. The way these arms are created, they are meant to be very rigid for up and down travel, while allowing some flex forward and back to absorb any impacts. Once the arms are on the truck, and you have some bulkheads in-between these spaces, you can’t really flex them with your hand like I do in this example. This was just to show how they are created to absorb impacts.

Ok, time for the install. I had just come back from a good session of bashing, and of course my aluminum a-arms were pretty bent out of shape. I started to dismantle the truck, and to my surprise one of the arms was really stuck. Normally the hinge pins end up getting a little bent, and it takes some muscle and tools to pry them out. Well after 5 minutes of pulling, I ended up getting the dremel out! I cut the pins to free the arm from the truck. With the arm free I still couldn’t pull out the pin! Guess this was good timing, because it’s another set of aluminum arms sacrificed to the RC god. Ok, back to the FlexTex arms! The install went very smooth. The instructions were decent, (although they start at step 6?) and all the parts were fitting well. 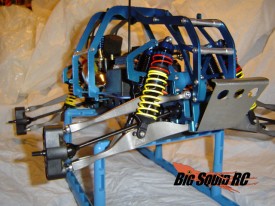 Once installed, they really looked dang cool on the truck! They are so different then the conventional a-arms that I have used for years. It’s nice to see a company that isn’t afraid to do something different! After the arms were installed, I noticed a potential problem. The RC-Solutions shock towers I had just installed have a little tab on them to stop the amount of travel in normal a-arms. Well, these are no normal a-arms! The way they are shaped, they are a little bit taller then most, and were going to be hitting that stop tab without much travel. I again pulled out the dremel, and did a pretty good job of removing the tabs. Travel problem solved, I was ready to bash!

I took it out to the parking lot for a quick spin to make sure everything was ready to go. Thirty seconds into the run, I suddenly noticed one of the shocks was dangling. I quickly stopped the truck and noticed one of the shocks came out from the arm. Now normally this wouldn’t be a big deal, but on the FlexTek arms, they have a custom hex shock mount bushing. You only get eight of these things with the kit, (would love to see a spare or two added to the kit) and you don’t want to loose one. A keen eye, and a whole lot of luck, I was able to spot the small important bushing. I then pulled out some serious lock tight to make sure this wasn’t going to happen again. If you pick up these arms, let me recommend you order an extra set of bushings. 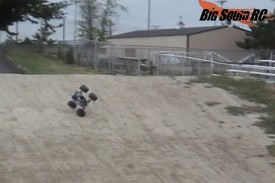 As luck would have it, our local track is still closed. They are busy making a new bigger and better one. Since I was really looking to put these arms to the test, I made a few phone calls, and was able to get us some time at a local BMX track! Now this is no normal BMX track. The first jump is 12 feet high, with a 7 foot tabletop, and the following 3 jumps are similar! I drove up the starting hill, squeezed the throttle tight, and launched it (to the roar of a few on-lookers). Not being one to really think ahead, it occurred to me while in the air, that I can’t see the landing side because there’s a 12 foot wall of dirt in my way!

Next all I heard were people’s groans, and I even saw some people cringe that could actually see the landing. It was apparently that bad. (I’ll try and make a video clip soon) I landed on just one front wheel, and it then cart wheeled down the hill all the way to the other hill for a total of about 15 bounces! Just walking up to it, I could tell something was broke. It turns out I just popped a rear turnbuckle off. I inspected the rest of the truck, and it all looked good. So a quick repair and I was ready to attempt the jump again! This time while standing on the top of the jump. I drove up the starting hill, turned it around and gunned it! I flew up over the hill, and actually landed it! I stayed on the throttle, and went for the second jump. You guessed it, I couldn’t see the landing! To the cheers of a few people, it turns out I landed that one also, and just kept going! This track was huge! 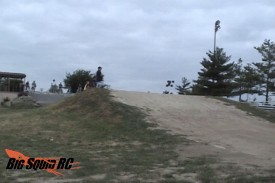 On the third jump I took another tumble, and it was just about as bad as the first! The truck ended up on it’s wheels, and I kept going. I could barely see it on the giant turn, and started to bring it back towards me. There were two huge doubles, and then a gigantic triple! I did ok in the doubles, but just slammed into the last bump on the triple! Even I cringed. In true basher fashion, if the trucks running, I’m gonna keep going. I made it through the whole track, and was just about out of gas at the end.

I then took the truck to the infield of the track, which was really rough. It was made up of dirt, rocks, and gravel. I tore it up till the fuel was gone. I then gave the truck a good inspection. Everything was intact, and the arms were perfect!! There is no way any other set of arms would of not looked like pretzels after this! I refueled and went for it again! I was out there for about an hour, and it was a blast. 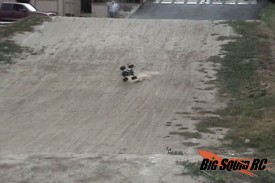 To wrap things up, the arms are amazing! They have been able to handle everything I can throw at them, and they just keep going. They are truly incredible. That being said, incredible has a price. A steep price. The full kit will set you back about $289. Ouch. You could buy 3 or 4 sets of aluminum arms for that price, but if you bash like I do, you’ll go through them in a year. FlexTek now has a new warranty where they claim they are indestructible! If you bend them or break them under normal conditions, they will replace them! How great is that?! If you can afford these arms, go out and buy them! If you can’t afford the arms, start saving your money.

For more information, and some other cool products check out the FlexTek RC web site. They make the arms for a few different trucks now, and also have some other cool hop-ups! 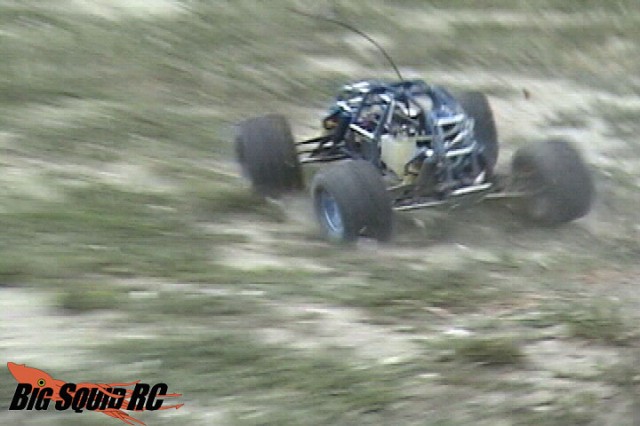