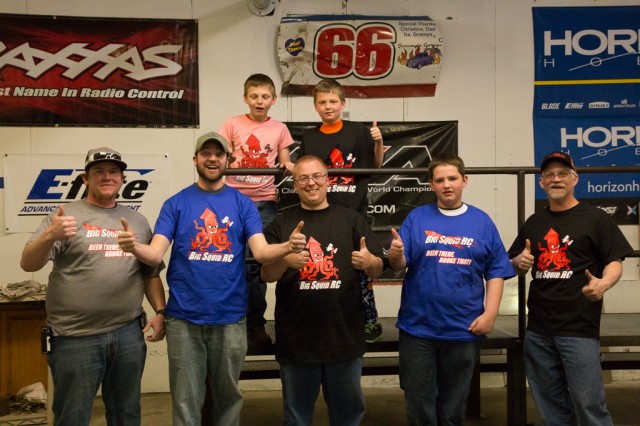 Over the weekend of March 22nd and 23rd A-Main Speedway, with an assist from Steel City RC Club, hosted the RC racing portion of their 2nd annual Spring Fling event in Pueblo, CO. We’re not really a race orientated group here at the Squid, for the most part bashing is our forté. But then C.L. Morgan, proprietor of A-Main Speedway, uttered those words that make our ears perk up and hearts beat a little faster: “We’re having a Big Air contest.” We’re in. Not only were we in, we sponsored the deal with lots of swag with the various Big Squid logos plastered all over the place, because that’s how we roll. Logos and ads, two things you’ll never see lacking on Big Squid.

But before everybody broke their cars and trucks in the big air contest, there was a lot of racing to be done. It started Saturday with all of the qualifying. And there was a lot of it. With ten race classes on two tracks, there was non-stop RC action going on every minute of the day. Until the weather turned and it got so cold that no one could stand it any more. So the party moved into the hobby shop where the door prize portion of the evening commenced. With sponsorship from the likes of Tekin, JConcepts, Team Associated, Viper, Venom, and more, there was plenty of stuff to give away. As the day wrapped up and the crowd filtered out the door into the snowy evening, the anticipation and excitement for the big day of racing that was coming could be felt all through the shop.

What does one do when snow is on the ground the morning of your big race day? You break out the snow shovel and start racing, that’s what. And that’s what happened Sunday morning. After a short delay and a bit of work clearing the driver’s stand and pit table, the racing was begun. Starting on the small track,  the lower mains for Pro-2 and Pro-4 trucks were run through and the plaques were handed out, followed by the 1/10 2wd buggy A main. After the buggies came the Sportsman class, where all the new drivers get their start. This race was one of my favorite of the day.  Young and old alike stood up on the driver’s stand, all newbies, all just trying their hardest to run a good line around the track. While the racing itself was rather manic and many collisions between vehicles and pipes occurred, hearing the encouraging words and tips from the more experienced marshals on the track, the spectators on the sides, and the race commentator just drove home the point that this wasn’t some major national championship level event where teams of factory shoes tried their hardest to one-up the next guy. It was a grass roots effort to have fun and friendly competition with egos checked at the door. The Short Course Buggies and Pro-4 A mains rounded out the racing on the small track. All attention then moved to the large track for 1/8 scale e-buggy, nitro buggy, truggy, monster truck, and more 1/10 Pr0-4 racing took place. With massive jumps and long straights these races saw big air and high speeds.

And that brings us to our main event. The Big Squid RC Big Air competition. After taking a bit of time grooming the launch ramp to provide a proper amount of big air, we started the show off right with the “Unlimited Class” and a Ten-SCTE on 4S, driven by Dan Hawken, pulling huge air and back-flipping much to the crowd’s delight. The man himself, C.L. Morgan tried to surpass the high bar set by Dan by sending his 1/8 scale e-buggy high and far, somehow managing to pull a forward flip with a twist but he couldn’t quite stick the landing. Many other attempts were made and many cars and trucks ended up broken, in the end Dan walked away with one of them brand spankin’ new hoodies that we’re now selling, before they were available to the general public. The two wheel drive class saw less air but no less excitement as competitors hucked their trucks left and right off the big ramp to score as much hang time as possible. Bryan McKeever ended up taking the win and scored himself a hoodie as well to go with the awesome Big Squid shirt he got at the give away the evening before.

All-in-all the 2014 Spring Fling was an excellent event and any basher would fit right in with the family-friendly crowd that was gathered. Comparing A-Main Speedway’s Spring Fling to the last big RC event I went to, the 2010 ROAR 1/8 Fuel Nationals, I have to say, spending a weekend at a local/semi-regional independent event with a group of amateurs is much more fun and exciting than going to a major national competition with famous faces all over the place. I’d rather be around people who’s passion for RC is derived from the fun of it all and not driven by the need to Win All The Things. The crew at A-Main Speedway and the helpful members of Steel City RC Club put on a great and fun event. If you’re in the area next year, be sure to check it out. In the mean time, hit up A-Main Speedway and Steel City RC Club on the Facebook to find out what they’re all about. 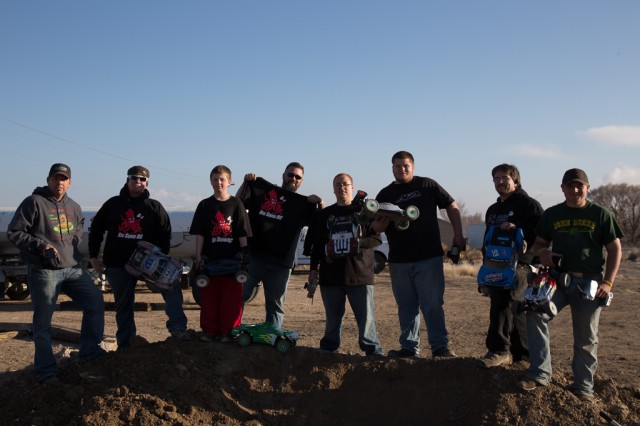