Friday at the Birds…. 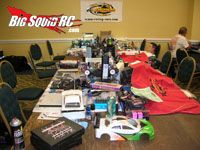 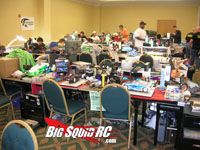 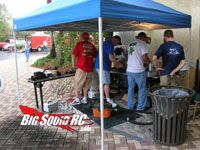 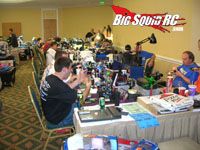 I’m still down here at the Snowbird Nationals ,my cell phone keeps going off every 3.259 minutes.It must be BigSquid calling, urging me to get out of this wonderfully heated outdoor pool and submit my daily report.

I must admit- the reasons are few to pluck myself from this perfectly warm water, with a perfectly clear view of the evening stars, with a calming view of the underbelly of the surrounding palm trees, with drunk scantily clad 20 something year old females wearing virtually non-existent swimming attire mindlessly bumping into me underwater. Only for you readers am I willing to make a such sacrifice.

Cheater, cheater, cheater!! So just what is cheating? Just what are the rules? Here’s the low down. If you are running a factory issued, non-tweaked BRUSHLESS motor at the Birds, consider yourself in the minority. In the “unlimited/mod” type classes, it doesn’t matter much if your brushless motor is putting out twice the power that did from the factory. But in other “slower” classes, where 10.5, 13.5, and 17.5 motors are mandated, this enters a grey area. Isn’t the entire point of specifying turns in these mandated classes to keep everyone roughly on the same playing field? Did you know you can fairly easily tweak 10% more power out an OEM 17.5? I learned how to do it today, and it took less than a half hour.

And it doesn’t stop there. The Li-po world is also home to the tweaking game. Seems the standard procedure now is to “bump” your Li-po. This is how it is done. First, fully charge your pack on a Li-po charger. Second, immediately charge the pack as a Ni-mh until it reaches 20-40 degrees over ambient temperature (btw sports fans, this is EXTREMELY dangerous, do NOT do this at home!!!!!). This typically yields another half volt or more while being discharged under a load. A half volt under load is a MILE in stock class racing.

Rules state that Li-po packs can only be of 7.4 volts. Now, there are “roughly” two ways to actually see a 2S Li-po pack at 7.4 volts with a DVO. The first, a static voltage reading of “roughly” a half charged pack. And second, a 2S Li-po pack under “roughly” a 8-10C discharge load. Neither of which are easily tech’able at races. So- because you can’t really “see” 7.4 volts in a legal Li-po racers car, a person tech’ing can’t really deem a “bumped” pack illegal. A maximum static voltage rule should be implemented. 8.4 volts maximum with the pack at rest would eliminate “bumping”, and is easy to check for. Or better yet, remove an upper voltage limit altogether. There would be no reason to dangerously “bump” a Li-po if the driver would be faster by simply using a properly charged 3S or 4S pack.

More Li-po news. The hottest rumor around the pit is that SMC is about to jump into the Li-po game. The best part of the rumor- their Li-po’s will be the first to be fully matched with numbers printed on each pack. The other hot Li-po rumor is about the MaxAmps “B.R.O.” packs. Word spread early and quickly at Snowbirds about these producing unheard of voltage under load for 4000 mah packs, and about their high-end price tag rumored to be $300 each. The best never comes cheap.

Everyone by now has heard about Muchmore products are now being exclusively distributed by Hobbico/Great Plains. The basher crowd may not know what they sell, but they do have one product on nearly everyones pit table at the Birds- the CTX-D2 discharger. This is the discharger of choice by the esoteric racing crowd on 6 cell ni-mh packs. You too can join that crowd for slightly over $200.

That’s it for today, I have to get back to the pool. Babes, beer, and warm water await me.