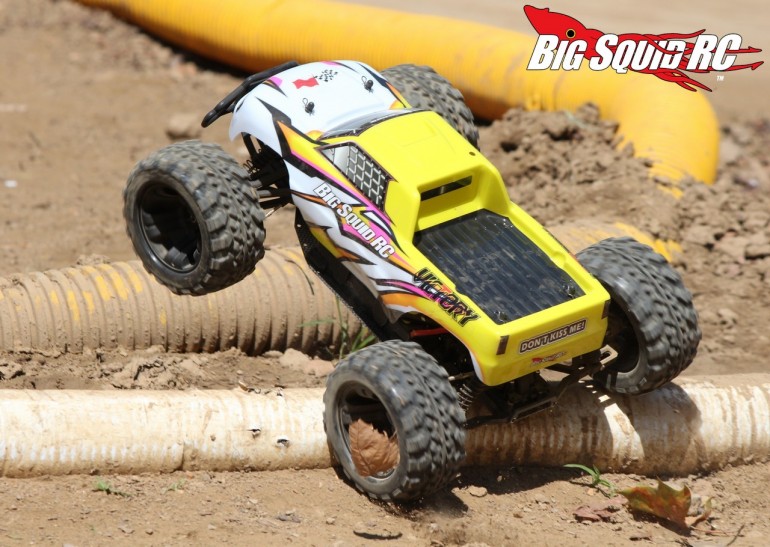 Being a bash oriented website, we always welcome the chance to beat on a good monster truck. The last few weeks we’ve gotten the chance to test the FS Racing Victory, an affordable 1/10 scale 4wd. How does it hold up? Does it have enough power? Has does it handle the rough stuff? Read on to find out…

What’s Needed To Complete: We just needed to come up with 8 AA batteries to get our Victory test truck in motion.

Build Quality: After a good hard look over the truck, we didn’t find any loose screws or leaking shocks, but we did find a lot of play in both the front and rear ends. Also, both the speedo and receiver box were laying loose inside the truck as their double sided tape had broken loose during shipping.

Set-up Notes: We ran the Victory bone stock. We left on the stock Tamiya connector and even used the included pack a bunch. We did skip the included charger in favor of a Hitec X1 Pro. Lastly, we occasionally ran the truck on a Duratrax Onyx 2S 5000 LiPo for more pep.

Turning: Oversteer is the name of the game with the Victory. On high grip surfaces the rear gets enough traction to not get too squirrelly, but on dusty/low-bite surfaces the front likes to stay planted while the rear slides out of control. We removed the pre-load spacers from the rear shocks and popped them on the front, this tended to help make the truck steer more neutrally. Interestingly, the truck comes with a really slow servo (albeit one with enough torque) and a marshmallow soft servo saver, yet it manages to still oversteer.

Jumping: With shocks a bit on the bouncy side and not much grunt out of the motor, don’t expect a lot of airtime from the Victory. Once you do get airborne the truck is very responsive, perhaps too responsive, to trigger input. Take offs are generally quite straight and the truck tends to jump level, but landings can be rough with the lightly damped shocks.

Bumps/Whoops: The Victory comes with shock oil that is a bit too light in both the front and rear shocks. This results in a truck that likes to bounce over rough ground instead of hunkering down and plowing through. Small bumps are easily overlooked by its large sized tires, but when the going starts getting real rough the truck tends to dart all over the place.

On-Road: First off, the Victory doesn’t traction roll, which of course is a great thing. Having to walk over and marshal a truck that traction rolls all the time is a pain in the rear. However, with very little power on tap the truck doesn’t offer a whole lot of excitement when driven on pavement.

Grass: With big tires and 4wd the Victory should be a beast in grass, but its low output power system really holds it back. Yes, it can get around in short grass, but anything taller and it simply runs out of power.

Tires: The stock tires are a very hard compound that should literally last for the life of the truck. While we found their forward bite to be decent on a variety of surfaces, they had little in the way of side-bite, resulting in low corner speeds.

Power: We aren’t going to beat around the bush here, the Victory is one of the slowest trucks we’ve ever tested. It tops out at 20 mph and it takes a longgggg time to get there. On the stock pack it can not spin its tires on loose dirt. From a dead stop it comes off the line quite slowly, its mid-range has no snap at all, and like previously mentioned, it tops out quite early. A soft power system can be a blessing for a first time noob, but if you are an experienced hobbyist you will need more power ASAP.

Radio: We generally had no issues with the included radio. Its ergonomics were ok for a number of different sized hands, we experienced no glitching, and it had more than enough range for all the bashing that we did.

Broken Parts: What broke on the Victory? Well, it’s not a very fast truck, so we didn’t hit anything very hard, but here is the rundown. On the second pack we thought the pinion had come loose, but upon further inspection the whole motor had slid. This was an easy enough fix that didn’t require any parts, so back to bashing we went. During “normal” bashing we didn’t break anything, but when we started to get extreme it didn’t take long to rip a front pillow ball out of the hub. When this happened the dog bone went flying and is now being looked over by the great RC Gods that keep all parts that get lost out in the field.

Perhaps the coolest “feature” of the Victory was its chassis. While the chassis is made out of aluminum, it is coated to look like carbon fiber. It looks trick, the carbon fiber coating actually lasted better than expected, and we got all kinds of comments about it while out bashing.

We didn’t use the stock charger because we couldn’t. While it came with adapters for plugging into wall outlets in other countries, it didn’t come with a plug that actually worked here in the USA.

There are little foam spacers on the body posts for the body to sit on. These were a nice little attention to detail, they keep the body from rattling and help prolong its life.

No, we didn’t sit the Victory next to any Helion trucks from a local HobbyTown USA, but if memory serves right several of the parts look similar.

The manual has page after page of exploded part views, a welcome sight compared to several companies that have quit doing that.

The Victory comes with one of the softest servo savers we’ve ever seen. That is great for saving servo gears, but not good at all for holding the wheels where you want them pointed.

The spur gear cover comes with a clear window so you can visually check the status of the spur/pinion. Very handy and nice touch.

The Victory actually comes with a wheelie bar. We can assure you that you will never, EVER, need it with the stock motor.

There is no rear bumper on the back of the truck at all. A bumper would go a long ways towards soaking up nasty hits to the rear of the truck.

After some good old fashioned hard running on an 85 degree ambient day we found the stock speedo to be very cool, but temped the motor at 150.

There is a sticker on the back of the truck that reads, “Don’t Kiss Me!”. Ummmmm….. what the heck?

It’s been a long time since we’ve tested a truck that required 8 AA batteries. Some guys on our test crew never noticed, some commented on how heavy the transmitter felt.

Best Mod: Pop in a LiPo ASAP, the truck desperately needs a nice little boost in power. Also on the cheap mod list would be heavier shock oil and putting more pre-load spacers up front.

Time To Bash: C We had to pop the speedo and receiver box back into their place after falling off during shipping, otherwise the truck was easy to get up and going.

Workability: B The Victory uses a standard layout that proved easy to wrench on. We just wished it would have come with hex hardware instead of Phillips.

Car Show Rating: C While the tire/wheel combo looked sharp, our testers were not feeling the love for the body which was raised way too high over the chassis.

Bash-A-Bility: C Considering the speed of the truck, it should be able to be slammed into just about anything without breaking, but we didn’t find that to be the case.

Handling: D With under damped shocks, oversteer, and tires with nearly no side bite, the Victory is a long ways from being the best handling truck in its class.

Value: C The Victory is no-frills, nothing fancy, at an affordable price.

Parts Availability: C With many of the parts on the Victory being used on multiple vehicles, and with may of them being out for several years, we were able to find replacement parts on-line without an issue. However, don’t expect to find them at many local hobby shops.

BigSquid Rating: C- If you are a noob with an extremely tight budget, the Victory might work for you. Otherwise, look to some of the better performing trucks in this category if you really want to have some fun.