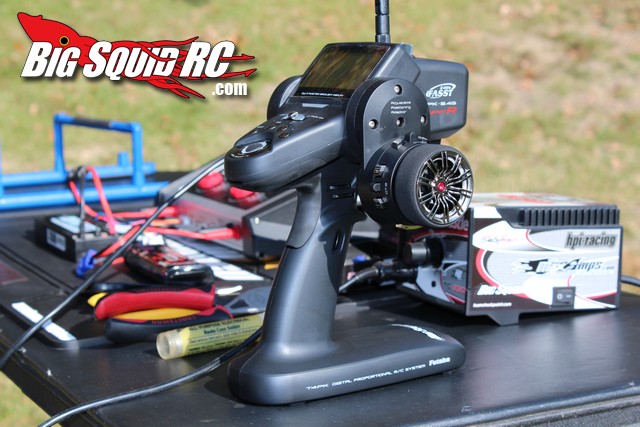 There can only be one “best” transmitter on the planet. Futaba’s entry into the uber-radio market is their legendary 4PK series and today we’ll be taking a closer look at the latest version, the 4PKS-R, also lovingly known as the 4PK Super R. Is it the best radio ever made? Is it worth the cash? Let’s see…

Build Quality– Superbly well made, feels like it cost over $500.

Feel In Hand– The Super R features new dual stage foam on the wheel, the only problem being that it’s soft towards the outer rim of the wheel, and firmer towards the inside. Most people only grip the wheel in one area, the outside, essentially making the dual stage moot. Honestly I prefer the wheel foam from the previous model, the 4PKS, its foam was slightly firmer and seemingly offered more grip. However, this is a highly personal matter, most of our testers preferred the new softer foam of the Super R. The grip and trigger on the Super R are held over from the 4PKS. The trigger is near perfection and the grip section is universally well liked for its ergonomics. Weight distribution felt perfect to some testers, while others thought it felt a bit bottom heavy with the stock Ni-MH cells. Those that thought it felt bottom heavy preferred the way the Super R felt after installing the optional Hobbico LiFe battery (part #HCAM6520). Also of note, nearly all our testers preferred the included drop down wheel adapter. Overall- the Super R is the best feeling radio we’ve tested.

Ease of Use– The majority our testers had an easy time navigating the Futaba Super R’s menus, the only exception being Iron Mike. Iron Mike is used to Spektrum radios and kept referring back to the Futaba’s manual to make even relatively simple adjustments. The rest of the crew had an easy time of making changes even without the manual. Yes, there are a LOT of features on the Super R, but they are typically easily found and implemented.

Features– I don’t know if the word “abundant” does justice to everything that the Super R can do. The latest high-end Futaba can handle any situation that a normal hobbyist is going to ask out of a transmitter. New for the Super R model is ESC and gyro mixing. Iron Mike is one of our resident crawler guys and he was digging the dual esc presets on his Axial crawler.

Glitching– We did not experience any glitching during our review period of any type.

Driving Performance– The new Super R is said to be 5% faster than the previous model but we didn’t compare the it back to back with the older 4PKS. However, we did compare it back to back with an Airtronics M11, a Spektrum equipped Futaba 3PKS and a Traxxas TQi. We would have preferred to have done blind testing to eliminate any per-conceived bias from our testers, but obviously that is quite hard to accomplish when using transmitters. After driving and going back and forth between transmitters the Super R proved to be more “natural” and “crisp” than the other radios. When wheeling the Super R our testers agreed they felt more “connected” to the test vehicle- a slight amount of steering input at the wheel immediately translated into a slight amount of steering at the car, a medium amount of throttle resulted in an immediately medium amount of throttle at the rear wheels etc. The Super R also seemed to have a more natural throttle curve on the trigger, especially compared to the Spektrum equipped 3PKS and the TQi.

Radio Range– To test range I sent Iron Mike walking with a Losi SCB out in a huge parking lot. We communicated via cell phones and finally around the 1200 foot mark the Super R started to lose contact. I must say 1200 feet is a longggggg ways, so far in fact that I could hardly see Iron Mike let alone the SCB. I’d say the only people that are going to consistently push the limits of the Super R for range would be high speed run guys. To get to the point here, the Super R had the longest range that I’ve ever personally tested and more than my eyes can actually use.

Durability Testing– Yes, we hucked the Super R to the ground a few times (ok, roughly a dozen times from heights ranging from 2 feet to 6 feet) with no ill effects. It might not look quite as pretty as when we got it, but it does work just as well. Btw, we huck it so you don’t have to. If you sit your Super R on the edge of your pit table (or tailgate) and it gets accidentally knocked off don’t freak out, from our testing we believe it’ll live just fine.

Downsides– The included wall charger takes up to 18 hours to full charge the included Ni-MH pack. We’d also liked to have seen telemetry on the Super R.

Best Hop-up– Easy, the Hobbico 1900 mah LiFe upgrade battery. It increases runtime, has a faster charge time, and most testers liked the weight distribution better after it was installed.

Car Show Rating – 10/10 – All our testers (and random guys around the track) agree the Super R is the best looking transmitter on the market.

Bash-A-Bility – 10/10 – Yes we are sadistic and even after repeated drops to a hard surface our Super R is still working fine.

Fun Factor – 9.5/10 – How can it not be fun sporting the trickest transmitter on the drivers stand?

Value- 8.5/10 – $550 isn’t cheap, but the Super R gives a lot of performance and features for the cash, and it feels like it is worth every penny while in your hand.

Big Squid Rating – 9.5/10 – Tentacles.. The Futaba 4PK Super R is the best surface transmitter we’ve ever tested. Ergonomics are outstanding, range is insane, and we’ve never felt more connected to our car than when driving with the Super R. We highly recommend the Super R to anyone looking for the best of the best.