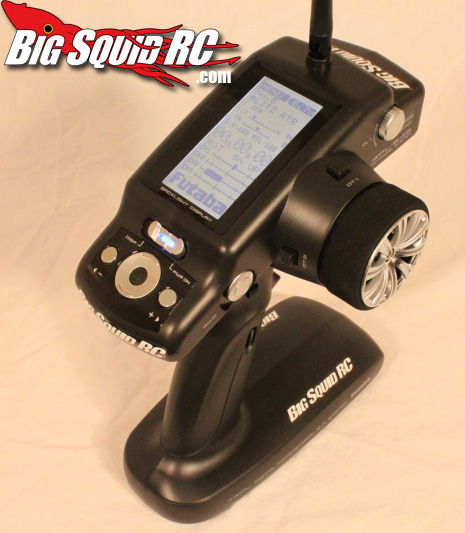 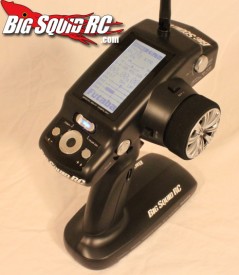 So you (like a lot of people) are in the market for a new transmitter. At the top of your priority list is 2.4Ghz, but you also want a radio that looks modern and feels terrific in hand. Oh and… you aren’t a cheapskate, so you are willing to pay for quality, but you don’t have a Brinks truck full of cash to spend. If that sounds anything like you the Futaba 4PL is certainly one of the units you’ll be researching. How good of a radio system is it? Luckily for you the BigSquid Bash Crew spent weeks testing a 4PL. Without further ado, here’s the scoop….


Update: The Futaba 4PL has been awarded BASHER APPROVED status! Read all about it right here.

The Futaba 4PL felt very “natural” to drive, it seemed to give a direct translation between your fingers and where your car went. The moment you turned the wheel on the transmitter the tires on your car were swinging as intended, and the throttle action seemed equally responsive. The 4PL felt exceptionally linear throughout the entire stroke of its steering and throttle leaving the driver feeling very “connected” to his car/truck. To boil it down, the 4PL felt very natural to drive.

At different times during testing we brought along a couple of other transmitters to compare the 4PL against- a Futaba 4PKS and a Spektrum DX3R. The 4PL easily held its against the higher priced units. The 4PKS was slightly more comfortable in hand, and felt slightly more responsive on track, but the 4PL was right there in the hunt. The DX3R was a different story, as the majority of testers preferred how the 4PL felt in hand and liked the 4PL better on track.

And as far as raw speed was concerned, the 4PL was plenty quick for all of our testers.

Range–
We’ve found testing range with Futaba radios is a real chore- they have ridiculous range which makes for a LOT of walking for somebody. That somebody turned out to be me this time, so I drove our test Venom Gambler as far as I could before losing control, then started measuring. Being the lazy sort that I am I stopped measuring at 1000 feet. The 4PL actually went further than 1000 feet, but quite frankly even seeing the Gambler at 1000 feet was quite difficult. If you need more range than 1000 feet you are going to need binoculars as well. 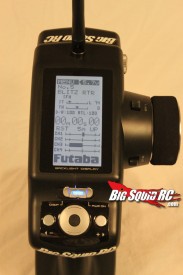 Menu’s-
The Futaba menu’s just keep getting better and the one on the 4PL was a joy to use. The 4PL menu’s took a minimal amount of time to get used to and after that were very easy to navigate.

Glitching-
We used the Futaba 4PL system for hours upon hours of laps (and bashing) and there was absolutely no glitching, not even once. Gotta give Futaba props on this one.

How Does It Feel In Hand?-
Trigger– The 4PL comes with the uber new Futaba trigger, one that fits your finger snuggly. This trigger seems to be preferred by many people, myself included, as I think it’s the best one of the market right now. For “normal” sized fingers there is less play going from throttle to brake compared to others on the market, making the Futaba trigger easier (and faster) to use.
Wheel- The steering wheel comes wrapped with what feels like the same high quality foam that comes on the 4PKS. This is a firm density foam that provides good traction and generally feels like the best on the market. The only downside associated with the wheel is that it can not be lowered, so if you are used to driving with a low-boy steering wheel you may not like where the 4PL’s wheel is mounted at.

The grip felt slightly too small in diameter for one of our testers, but to others it felt fine. The grip has a strip of rubber on the front side to offer your hand added traction. Rubber all the way around the grip would be optimal.

Weight- The 4PL feels quite light and is perfectly balanced in hand- it won’t feel like you are holding a concrete block by the end of an hour long gas main.

Overall Feel- The 4PL has terrific ergonomics for most peoples hands, and perhaps more importantly, it feels like a high quality unit. 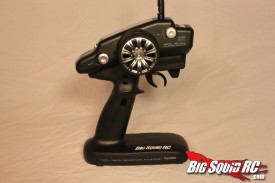 Best Hop-up-
The rechargeable 2 cell 1900 mah LiFe battery sold by Hobbico. Sets ya back $35 bucks but is worth every penny. Trust me on this one. Seriously.

If you are a Futaba employee you might want to skip the next section…. thanks! 🙂
Durability Testing-
Normally when I do a review I don’t look at anything that has already been said about the product on-line. I don’t look so that my opinion is not skewed. When I do a review I only want to report on what I saw/experienced first hand.

Well…. I was done testing the 4PL over two weeks ago, I had the bulk of the review typed up and ready to go, so I thought to myself, “Oh what the heck, maybe I should see what others are saying about the 4PL on line!”. So off to the message boards I went. I came across a couple of threads questioning the 4PLs durability. During our testing we treated it like we stole it and had absolutely no problems of any type, so….. seeing as how I still had two weeks before deadline, I thought I’d give the 4PL a true hardcore bashing to see if the internet pundits had a leg to stand on, or if they were full of it.

I found where people had reported the steering locks had broken on their 4PLs. It seems “some” people had turned their steering wheels too far/hard and the stops had broken. So I grab our test 4PL and started twisting the wheel hard in both directions trying to break the stops. No, I didn’t give it full strength, but I turned the wheel 10 times harder than a normal person ever would during normal driving. I am happy to report our 4PL passed the “p!$$ed off driver cranking on the wheel” test with flying colors.

Next… I ran across a thread reporting their 4PL had broken from accidentally being dropped. IMO, for a transmitter to be worthy of being Basher Approved its gotta at least take a drop from pit table height. I mean people accidentally drop their radios all the time, if it can’t take a little shock damage they aren’t really worth buying. So I grab the 4PL and set it on my pit table…… and knock it off to the concrete floor in my garage, not once, but twice. I mean surviving it once could have just been a fluke. After I test out of the radio (to be certain it was operating perfectly) I give my editor Brian a call.

Cubby- “Hey Brian, I just tested the durability of the 4PL by dropping it off my pit table onto concrete a couple times. Zero problems, it rocks!”

Brian- “Quit being so lazy Cubby, do it again but get video this time!”

So on strict orders from the top I ended up dropping the 4PL a few more times for video purposes. If you are contemplating buying a new 4PL but wonder how tough it is, I can state first hand it’s a beast. All in all our test 4PL hit terra firma 10 times, from heights varying from 3 feet to 6 and a half feet and it works as good today as it did when it came out of the box. Here’s more props to Futaba for putting out a quality product that is made to take a beating.

Enjoy the video, and if you end up owning a 4PL know its not the end of the world if it accidentally gets bumped off your tailgate. 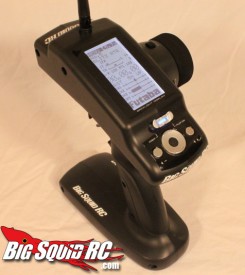 Downsides-
Not many with the 4PL- we had one tester complain the trigger was too tight, and another that the grip was too small, but the bulk of our testers loved how the 4PL felt.

Also…. it’s a bummer that not all Futaba 2.4 receivers will work with the 4PL, but at least the receiver that comes standard with the 4PL is at a good price point (only $50 for the R2104).

I get paid to complain, but I simply can’t think of any more negatives for the 4PL.

Conclusion-
The more we tested the 4PL the more we liked it. The Futaba 4PL is easy to use, felt outstanding in hand, suffered no glitching, had ridiculously long range, and drove better than radios costing significantly more than it does. The 4PL is top notch at everything it does, yet sports a very reasonable price point.

As with all our stuff, if you see us at a track or bash spot, stop by and say hi! Maybe you can take a test drive, or at least get some sweet stickers!

Time To Bash – 9.0/10 -Very easy binding the transmitter to its receiver. Other than that pop in 4 AA batteries and you are dialed.

Workability – 9.0/10.0 -The menus were well liked by the Bash Crew, but like any high end transmitter there is a lot of stuff going on there.

You can check out our 4PL unboxing pictures if you want a few more.

Posted by Cubby in Accessory Reviews, Featured Posts, Futaba on Tuesday, April 19th, 2011 at 8:55 am