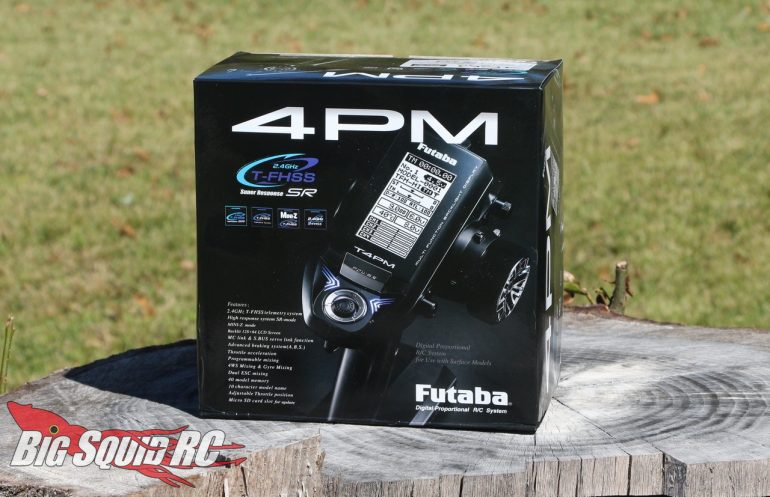 Overall, what is the #1 upgrade that you can make on your new RTR? In most cases, if you are truly looking to improve overall performance, that would be to replace the radio. You see, RTR radios are known for lackluster performance, as well as terrible ergonomics.

For the last few weeks we’ve been testing the Futaba 4PM. The 4PM comes with tons of features and is priced just over the $200 price point. It promises high performance and long range, but how did it hold up in the real world? Read on to find out if the Futaba 4PM is a must have upgrade, or one to hit the snooze button on…

What’s In The Box- Inside the box you will find the transmitter, an extensive manual, a dry battery holder, a mini-screwdriver, as well as a receiver (of note- the 4PM is also available without a receiver).

Build Quality- We were big fans of how the 4PM was built. The entire unit had a quality feel and we could find no fault with its assembly.

Test Venues- We used the Futaba at normal bashing venues, as well as at the track. From miles of mud, to high-bite pavement, we tried to test the Futaba in a wide variety of conditions.

Set-up Notes- We ran the 4PM in a number of different vehicles. Our review unit saw service in a Traxxas X-Maxx, Vaterra Halix, ARRMA Kraton, as well as an Axial UMG 6×6.

Feel In Hand- How comfortable is the 4PM? Does it feel like a “high-end” radio? Does it fit a wide variety of hands? Our test crew was impressed with the feel of the 4PM. The molds for the plastic handle were quite smooth, the end result gives your hand a very comfy grip. The wheel seems straight off a high-end unit with an extra soft foam grip. The trigger was very nice, in fact all but one of our test crew members preferred the trigger on the 4PM over the one that comes in the much more expensive 7PX. Another point that we have to make with ergos is weight- the 4PM uses only 3 AA cells, so yes, it is Extremely lightweight in your hand. And while some other manufacturers may have dropped weight from the battery tray and left the transmitter unbalanced, the Futaba is just oh-so-slightly top heavy.

Overall- the 4PM does feel like a high-end radio in your hand. It feels like a quality unit, and certainly better in hand that any RTR radio that we’ve used. When you upgrade from a RTR radio, your hand will thank you for it on those long trail/bashing days.

Ease of Use- We found the 4PM to be typical Futaba, which means exceptionally easy to use/program. For those of you already using Futaba, you will acclimate within seconds. Drivers coming from another brand will spend maybe 5 minutes catching on to the Futaba’s programming. None of our test drivers had to resort to cracking the manual open to make any changes, which is always a good sign. Lastly, the switch/wheel used for programming is a bit small for larger hands, but seemed to work well for most everyone else. OK, really lastly, the screen is a bit dated, but easily shows you all the info that you need to know.

Features- While the list of features on the 4PM isn’t as extensive as something like the 7PX, it still has a ridiculously long list. It has mixing, you can store 40 models in it, it has 4 channels of output, it has telemetry, plus loads more. If you absolutely “need” more features than the 4PM, chances are you are doing one seriously hardcore build.

Glitching- Despite driving next to overhead power lines, cell phone towers, etc, we never noticed a glitch on the 4PM. Even at distance (like over 300 feet away) the signal from the 4PM seemed absolutely locked on the car.

Driving Performance- WOW!!! The 4PM drove much better than we expected! In fact, it felt very close to how well the 7PX drives. Yes, when we went out testing we did some back-to-back comparisons driving the same truck (a Halix) with the 4PM and 7PX. All of our test drivers came back literally saying “WOW!”.

The Futaba 7PX typically blows away a driver coming off a RTR radio, it is just so much smoother and precise. While driving the 4PM, we almost could not believe just how close it drove to the 7PX. Compared to a typical RTR radio (that we drive wayyyyy too much around the BSRC offices), the 4PM is a LOT smoother and precise for both throttle/brake and for steering. Futaba typically sets the standard for linear trigger and wheel feel, and we believe that the 4PM is vastly superior to RTR units in this category. The 4PM not only blows away RTR radios in every way, but just might be what we feel is the best driving “out of the box” Futaba that we’ve ever tested. The 4PM seems to have nearly all the speed, linearity, and smoothness of the 7PX, but comes with a superior trigger, thus making it easier to drive fast out of the box.

Radio Range- Being the lazy bunch that we are, we didn’t step off maximum distance. We did step off one bash area that we were doing speed runs at and found that the 4PM was rock solid well past 300 feet in radius. We drove the car further away than that, but at 300 feet even our large ARRMA Kraton looked like a tiny spec on the horizon. Basically, we found that if we could see the car, the Futaba still had full control over it.

Durability Testing- While it is hard for us to throw a new $500+ radio at a concrete wall, those reservations tend to fade away at lower price points. Needless to say, our 4PM test unit saw a rough life. It survived numerous drops, tosses, as well as being run over by numerous rc trucks. The 4PM does not use an external antenna, which is great for durability, so the only damage the radio sustained was of the superficial variety. Even though our 4PM is covered in nicks and scratches, it still works as well as the day we got it. We will note that we did not test/use it in a wet environment, so we can’t say how it would hold up in rainy conditions.

Time To Bash: B It doesn’t take long to get the Futaba up and running. The menu system will take you less than 5 minutes to learn.

Car Show Rating: B The 4PM has modern styling and a large base to help keep it from falling over. The wheel on the 4PM looks (and almost feels) like it just came off the higher-end 7PX, but its screen looks a bit dated.

Bash-A-Bility: A Our Bash Crew found the Futaba 4PM to be rock solid. After tormenting it for weeks, the 4PM still works as well as when we got it.

Range: A Futaba has a great reputation when it comes to range and we found the 4PM to have plenty. If we could see a spec of a car on the horizon, the Futaba had control over it.

Value: A We feel that the 4PM gives high-end driving performance, along with modern styling, at a great price point. It crushes your everyday RTR radio for performance and can go a long ways towards helping you become the best driver that you can be.

Big Squid Rating: A- When we first cracked open the box on the Futaba 4PM we were expecting ho-hum. What we got was a radio that rivals $600+ units for performance while driving! The 4PM has all the cool features that you want, plus it gives you a real taste of what it’s like to drive a truly high performance transmitter. Geez, ditch that RTR radio already and find out just how much performance you’ve been missing!

Posted by Cubby in Accessory Reviews, Transmitters on Friday, October 25th, 2019 at 4:18 pm