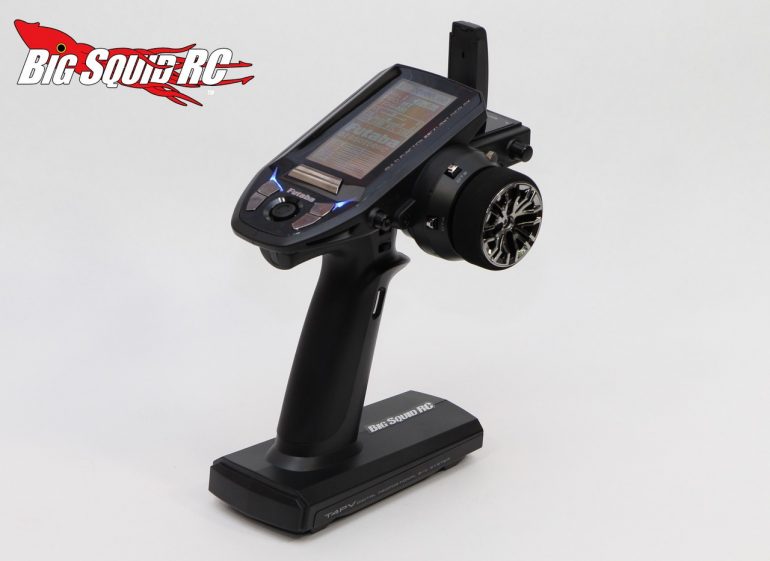 While some bashers don’t mind spending crazy money on the most elite electronics on the market, most shoot for the best bang for the buck. The brand new Futaba 4PV has a slew of features normally found on high-end radios, but is priced considerably less. The combination of those factors will make the 4PV a prime candidate to be bought when a basher hits his local hobby shop looking for a good upgrade radio. We put the new Futaba 4PV through its paces in a bashing environment to see it had what it takes to be the king of the bashing hill. How good is it? Read on to find out…

Build Quality- The 4PV feels exceptionally well built. We scanned over it, plus its receiver, and could find no flaws.

Set-up Notes- We used the 4PV to control two different radically different vehicles. The first was a Team Durango DEX210V2 buggy with the second being an ARRMA Senton short course truck. Electronics (servo & BL system) were stock in the Senton while we ran a Futaba servo and RC Gear Shop brushless system in the Durango.

Feel In Hand- Well hello there sweetheart! Futaba got the 4PV right. All of our reviewers absolutely loved how the 4PV felt in hand. It has a truly “high-end” feel to it, we were very impressed.

Weight- It was light, but still had enough weight to feel like a high end unit. It was slightly top-biased, but wasn’t so heavy as to be a burden during longer runs. It just felt “about right” to the guys (and gal!) on our test crew.

Trigger- While we felt like the trigger on the 4PX was a bit on the loose side, the unit on the 4PV was right on point. It wasn’t too tight or too loose, even for guys with thicker fingers. No, the trigger does not have rough edges on the flesh side like some people prefer (us included), but its spring tension was right in the ballpark and generally felt like a high-end unit should.

Grip- The grip on the 4PV felt a bit slimmer than the one on the 4PX, which was actually an improvement for most of our testers. The back of the grip has a very high quality rubber insert, while the front side is a fairly tactile plastic.

Wheel- A nice, high quality, foam is used to cover the wheel. It isn’t a dual stage foam like what comes on the 4PX, but it does indeed feel nice in the hand.

Trigger/Grip/Wheel/Relationship- Once again our reviewers raved about the 4PV. No, it does not come with a drop down wheel (that is an option part), but our review crew emphatically liked the ergonomics between the wheel, trigger, and grip.

Ease of Use- We didn’t have any problems getting the 4PV set-up to our test vehicles. We did not have to resort to using the manual, but we did have to spend 10 minutes or so learning the menu system. Our Bash Crew did not use any of its more esoteric features, just basic things like trim, channel reverse, end points, etc. To boil it down, the menus were easy to learn and to use for us.

Features- The 4PV brings a LOT of features with it. You can set up all sorts of crazy mixing and customize it to nearly your every whim. Once again, we only used the Futaba in normal/basic basher installs, so we didn’t test the higher functions, but they are there for when you need them.

Glitching- We didn’t run the 4PV in any gas or nitro applications, but for our two brushless installs, we experienced no glitching. We ran near cell towers, under power lines, and next to multiple other drivers, and not once did the 4PV misbehave.

Driving Performance- After putting in pack after pack of driving, we felt the 4PV had a very linear feel on both steering and throttle. Some radios come across a little soft at initial throttle and steering inputs, but the Futaba had more of a perfectly linear feel.

The 4PV also felt fast, like superbly quick. It seemed like it was impossible to notice any lag between trigger or wheel inputs and them being performed by our test cars.

And perhaps best of all, the 4PV just felt natural. There was nothing out of the ordinary to notice. Our test crew member’s personal radios include 2 Futaba 4PLSs, one 4PK Super R, and a KO EX1. All of them thought the 4PV drove as well, or better, than what they are currently using.

Radio Range- You know, testing range on a Futaba radio is a tiring job. We ran one of test vehicles out to 1000 feet and still had perfect control. The buggy was a speck on the horizon, but we could still control it.

Durability Testing- There is something just plain wrong with dropping a brand new radio, one that isn’t even available to consumers, from the top of a drivers stand down to terra firma. But in the name of science, that is what we did. Not once, not twice, but three times. We also dropped it from four feet high to concrete, just so you don’t have to. We are happy to report that our 4PV still works as good today as the first day we cracked the box open.

The 4PV uses an antenna much like the 4PX. It is very sturdy and can be rotated up for better range, or left down for the ultra-lazy or when range isn’t a concern.

No batteries are supplied with the 4PV so we ran on some cheap AA cells. You’ll be happy to know that the battery tray is a large enough size for a typical LiFe rechargeable unit.

The screen on the 4PV is easy to read in nearly an light condition.

The 4PV uses the new school on/off switch like the 3PV. You have to give it a touch to get it going and a push/hold to turn the unit off.

Hooray! You don’t have to use super expensive receivers with the 4PV. It will work just fine with S-FHSS receivers that typically cost under $50.

Time To Bash: A We found the 4PV to be very easy to get up and running in our test cars.

Car Show Rating: B With a modern high-tech look, and styling cues from the 4PX, our test crew were big fans of how it looked.

Bash-A-Bility: A Yes, we did “stupid stuff” to our test unit, and no, it did not break.

Range: A Nothing beats a Futaba for range and the 4PV was no exception. The Futaba had more range than we had eyesight.

Value: N/A Sorry folks, we don’t know exactly what price the 4PV will hit the streets at here in the states. It is rumored to be under $300,

Big Squid Rating: A- We found the Futaba 4PV to be a fantastic radio, one that is arguably the best on the market for a hardcore basher. It has a high-end feel, it has high-end performance, yet it comes in at a mid-level price point. The 4PV is a great radio and we can very highly recommend it to you.