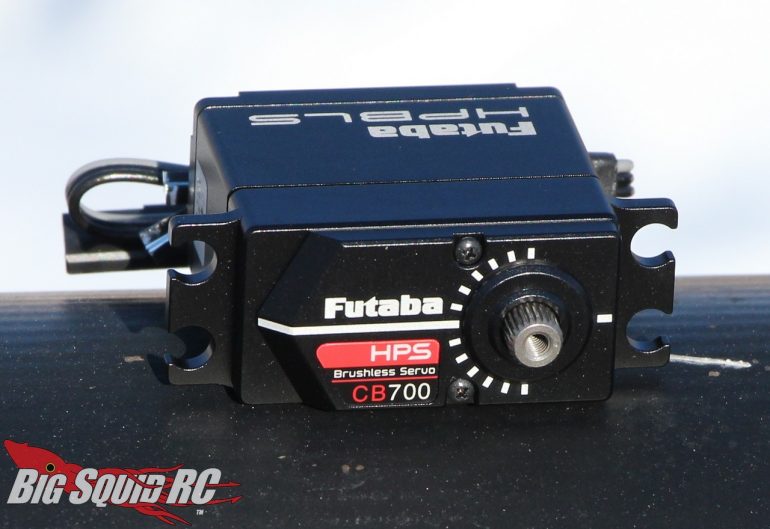 There are good servos, then there are Great servos. The HPS-CB700 from Futaba was designed to be the best of the best. With stellar specifications and a rock solid pedigree, the CB700 promises outstanding performance for your 1/10 or 1/8th scaled vehicle. We’ve been able to test the Futaba for a couple months now, scroll on down to see just how it stacks up to the competition…

Set-Up And Install Notes- We used the Futaba in a wide variety of different installs. We used the CB700 in a GMade GOM, a Vaterra Halix, an ARRMA Kraton, a Carisma Range Rover crawler, as well as a Pro-Line PRO-MT 4×4. The rock crawlers were a good test for raw power and feel, as were all the 4×4 monster trucks. Also, we used a Futaba 7PX as the transmitter during all testing.

How It Drives- Seriously, Wow!!! OK, so you expect to get a pretty good driving servo at this price point, but it still managed to exceed our expectations. First off, it never seemed to lack for power, ever. No matter how tightly we were bound up in the rocks, or how mud covered the tires were on our P-L Trencher shod Kraton, the Futaba always had more than enough raw power to keep the wheels pointed exactly where they were supposed to be.

And then there was its speed. While perhaps not the very fastest servo that we’ve ever tested, it is right up there at the very top. The lock-to-lock speed on the Futaba was impressively fast, even with huge Trencher monster truck tires on the Kraton.

However, the very best part of the Futaba was its smoothness. What really separates the $240+ Futaba from its $150 and down competition, is just how buttery smooth its response is. Yes, there are some extremely smooth servos in the $100-$150 range, but there are none that we know of, that can rival the feel of the CB700.

At the end of the day, when you combine all that power, with all that speed, with perhaps the smoothest feel on the planet, it really makes of a huge difference when driving. When crawling that extra smoothness is especially felt, and can actually come in handy when in extremely tricky situations. For WFO rigs like the Kraton, PRO-MT 4×4, and Halix, it was the power of the Futaba that came in most handy while bashing.

Durability- So the Futaba drives like a top shelf servo, but can it take a hit? Initially we took it easy so we could get a real good feel for how it drove. Later, we drove it with reckless abandon. After a couple months of torture, our test unit still lives. Now, we did make sure all our servo savers were working properly, so the Futaba did have some protection in our bash trucks, but in our crawlers it was used with a simple metal horn. We know that no servo will live forever, but from what we’ve seen, the CB700 holds up incredibly well.

Final Verdict- While definitely not a budget servo, the Futaba HPS-CB700 is an outstanding unit, and easily one of the best on the market. For your hard earned cash you get top-shelf performance, along with impressive durability. If you are looking to put the very best into your next build, the Futaba will not disappoint.