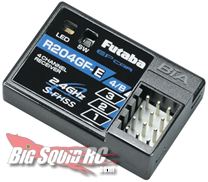 The new R204GF-E is Futaba‘s best attempt yet at creating a micro sized receiver.  While still not the smallest receiver out there, this one is certainly a valiant attempt at shrinking the footprint on their rather large (comparatively) receivers.  The R204GF-E is a 4 channel, 2.4 GHz receiver made to pair with Futaba’s sport line of radios that operate using the S-FHSS/FHSS system.  So those of you with a 3PL, 4PL, or 3PRKA radio might want to give this one a look.  Other features include an operating voltage of 4.8 to 7.4v, a built in antenna with an approximate 230ft receiving range and a weight of only 6g.

The R204GF-E should be hitting hobby shop shelves around the end of January with a MSRP of $49.99.  we would normally point you to the Futaba website for more info, but the receiver isn’t there yet.  So here’s a link to a video of ducklings being blown around by the wind.  If you laugh at their anguish you are a heartless monster!