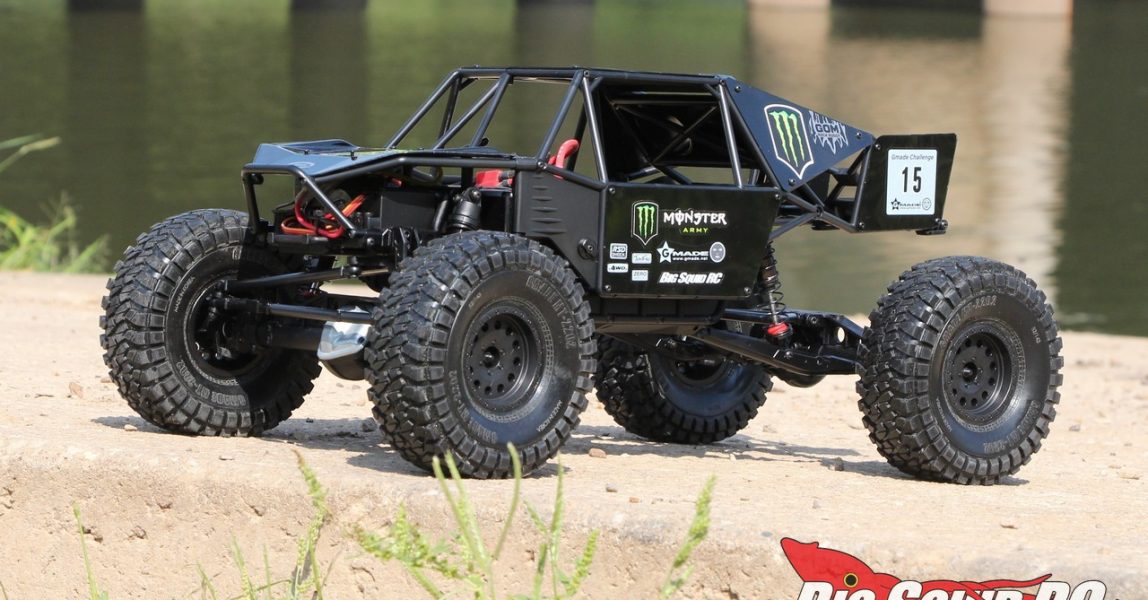 RC rock crawling is all the rage now days and Gmade has been producing some very cool trucks for the genre. Over the last couple of months, we’ve been able to check out their GOM Rock Buggy RTR. The GOM is an affordable rock buggy that was designed for serious off-roading. How long does it take to get the GOM RTR up and running? How well does it handle serious off-roading? How hard is it to break? Keep on read’n to find out those answers and more…

What’s Needed To Complete: To get the GOM RTR up and running you’ll need polycarbonate paint, CA glue for the tires, basic tools to install the body, a battery for the truck, some double A cells for the transmitter, and a battery charger.

Build Quality: Gluing the tires and painting/installing the body was up to us, otherwise we found no fault with the assembly quality of the Gmade. Gear mesh was good, the shocks were well assembled, we didn’t find any loose screws, etc.

Test Drivers: For testing we enlisted Iron Mikeee, Hawaiian Christopher, T-Mohr, as well as yours truly.

Test Venues: We used two parks in our local area for testing. Cliff Cave park just outside St. Louis Missouri has numerous incredible places for rock crawling, as well as general off-roading (like dirt paths, leaf covered areas, sandy areas, gravel). We also used a park called (and we aren’t even kidding here) Minnie Ha Ha in Fenton Missouri. Minnie Ha Ha has some rocks for crawling, but is better known for its sand and dirt trails. Oh and yes, we used our Costco parking lot to measure top speed (we needed plenty of space, LOL).

Set-up Notes: So ya, Gmade calls this version of the GOM a RTR, but we call it closer to a ARTR. You will need to glue up the tires, then paint and install the body before you can hit the trail. Our friends over at Pro-Line Racing supplied some uber glue to make sure the tires never, ever, come off on the trail. For paint, we used a couple spray can coats of black from Pactra. After the black paint, we threw on some Monster Energy livery to spruce things up a bit. Also, the number “15” was put on the rear number plate to help celebrate BigSquidRC’s 15th Anniversary. 🙂 The stock speedo connector is a Deans/t-style, so we used a MaxAmps 5250 2S LiPo with a Deans connector for power. MaxAmps double As were used in the transmitter for insane life.

Turning: No, you aren’t gonna rail a big berm like Jeffrey Herlings with ANY rock crawler, let alone the GOM. The GOM comes with fully locked diffs front and rear, which is awesome for crawling, but sucks for turning. Yes, the GOM turns about as well as the other crawlers on the market, but if you are looking for an rc car that really turns, look into a different product segment (monster truck, buggy, etc). While crawling, we found that the GOM turned better than expected. The GOM comes with a much better than expected stock servo, which was more than up for trail driving and weekend crawling. While not fast, the servo can easily sweep the front tires on carpet, and does an admirable job for an RTR servo while crawling.

Jumping: So… if you are looking for something to make roof jumps with, the GOM isn’t your rig. The GOM tops out at less than 10 mph and has suspension that is set up for crawling, not hucking triples. With that said, we did multiple small jumps while “rock racing” and the truck seemed to land with a bit of bounce.

Bumps/Whoops: Combine a low top speed (7 mph), with suspension set for The King of Hammers, and no, you won’t be pounding the any whoops like K-Roc with the GOM.

On-Road: We did a tiny bit of on-roading with the GOM and found out that curb crawling can be fun for a while, but more top speed is needed for real on-road fun.

Grass: Big/grippy 2.2″ tires and full power to all 4 wheels equals an absolute beast in the grass. While not fast, the GOM had no problem crawling its way through moderately deep grass.

Tires: How about those stock tires? No, they aren’t ultra-soft like high-end crawling tires. However, they have a great look and the tread design works well in real world conditions. While not making it easy for new users looking for a true RTR, we actually like the way the tires came not glued, thus allowing a new user to pop their favorite aftermarket tires on the stock wheels before the first drive. We stuck with the stock tires for the review, and found them good looking and quite usable, but there is much more grip to be had on the aftermarket if needed (think Pro-Line!).

Power: Compared to other RTR crawlers, the GOM had a comparable amount of power on tap. It had enough power to spin the tires on loose dirt, and more than enough for all the rock climbing that we did. The speedo is programmed super soft right off the bottom (a good thing on a crawler), then the power is quite linear until it very quickly hits top speed. We found both the amount of power, as well as its delivery, to be fine for weekend crawling.

Radio: The included Flysky unit worked fine during our testing. It had plenty of range, it never glitched, and it was very easy to make adjustments with.

The speedo was programmed for heavy drag brake when you hit neutral. This really helps when crawling, but can result in nose wheelies when driving on pavement.

How do you get a battery into the GOM? There is a handy dandy door on the driver’s side that allows you to slide a pack inside. The door worked well for us, as did the battery tray.

The suspension is a bit stiff for straight up crawling out of the box, but the stiffer settings tend to help when blitzing rock sections.

The stock links are plastic, which help keep the price point down while allowing the owner to pop on his choice of upgrade links. The plastic units had a lot of flex, but didn’t break during our testing.

On that note, the link that runs from front hub to front hub is far too soft. It flexes too much when steering, which results in the driver’s side front wheel not getting nearly as much steering power as the passenger side wheel.

With our crew so used to testing 1.9″ rigs, we had to take some time to get used to that big 2.2″ wheel/tire combo on the GOM. The larger tires make it easy to blast over some sections that leave rigs with smaller tires hung up.

Also on that note, the GOM uses off-set pumpkins in its axles. This small amount of off-set can come in really handy out on the trail. With a bit of proper line selection, the combo of large tires, capable chassis, and increased clearance of the off-set pumpkins helped us get over spots that we were struggling to get over with over trucks.

Best Mod: The overall platform is quite usable out of the box, but those flexible plastic stock links are first on the list for replacement.

Time To Bash: C The box says RTR, but we would call it something closer to an ARTR.

Workability: B We found spinning wrenches easy on the GOM. The layout was “normal” and the stock hardware worked fine.

Car Show Rating: B Taste is different for everyone, and the painting of the body is left up to you, but overall our Bash Crew rated the GOM a solid B.

Bash-A-Bility: B This version of the GOM comes with a flexible RTR type plastic that helps it soak up abuse.

Fun Factor: A Ripping over rocks, throwing a bit of roost on dirt trails, and hucking it down cliff faces were just some of the fun things we did with the GOM.

Handling: B The RTR version of the GOM was much more capable than we expected.

Value: B At well under $400 the GOM RTR is a solid rig at an affordable price point.

Parts Availability: C We did not find any parts for the GOM locally, although many parts can be shared among crawler type vehicles. We were easily able to find parts on-line.

BigSquid Rating: B The Gmade GOM RTR is loads of fun for very little money. This 2.2″ rock buggy can easily blast over rocks, while also being very trail capable.